Some RVers will need to take steps to ensure that their towed vehicle battery doesn't go dead while they are traveling, necesitating a jump-start.

Assure that your towable’s battery is up to the task of starting the vehicle once you reach your destination.

One of the most frustrating things that can occur during an RV trip is arriving at the day’s destination with a discharged battery in the towed vehicle. You pull out the jumper cables, only to realize they are too short to reach the motorhome’s battery.  Next, you are presented the task of finding a kind person who will let you get a jump from their vehicle or lend you a battery charger. Usually it’s not difficult to find someone at the campground who is happy to help, but it’s still an inconvenience for them and an embarrassing nuisance for you.

There are many reasons a car’s battery can be drained while it is being towed. Most prominent would be the use of a supplemental braking system that plugs into the vehicle’s 12-volt-DC power outlet. Another might be the car’s electrical system triggered by the ignition switch position. Of course, there may be other less obvious battery drains, such as alarms, monitors, and equipment left on.

In order to keep the towed vehicle’s battery from discharging, you have at least four options available.

Stop And Start
The easiest solution is to stop every two or three hours, start the towed vehicle, and let it idle for five or 10 minutes while you stretch your legs or have a snack. This will provide a fair amount of charge to the battery, but it is a bit of a hassle, and the possibility remains that the battery will not receive enough charge during the brief time it is running to start the vehicle when the destination is reached. 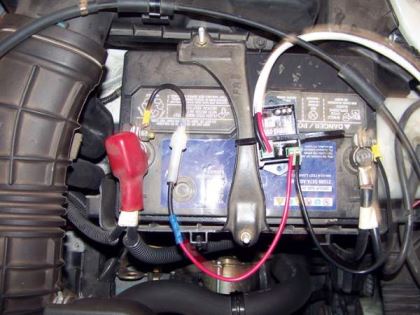 LSL Products (877-257-4655, www.LSLproducts.com)makes a system called the Toad-Charge. It is an electronic module installed on the charge line at the towed vehicle’s battery and a 15-amp circuit breaker for the source end at the coach batteries. According to the manufacturer, it will monitor and limit the charge rate and prevent any discharge of the car battery. Three LEDs on the module indicate the system’s status: Power, Charging, and Reverse Polarity. If the device is properly connected, the Power light will come on whenever the motorhome engine is supplying it with more than 13.0 volts. The Charging light also will come on whenever the processor is charging the towed vehicle battery. After the motorhome engine is shut off, all the lights go out as soon as the charge line voltage drops to less than 12.8 volts, at which time the processor disconnects the towed vehicle battery from the motor home to prevent discharge. If you have the connection backward, the Reverse Polarity light will come on.

Roadmaster Inc. (800-669-9690, www.roadmasterinc.com) also offers a charging isolator system called the Automatic Battery Disconnect that provides a constant charge to the battery as well as positive current to any towed vehicle accessories that require power.

According to product literature, the Automatic Battery Disconnect is ideal for anyone towing a vehicle that requires the battery cable to be disconnected or those who want the security of knowing that they will have a fully charged battery during and after towing.

The Automatic Battery Disconnect features a marine-grade, high-amperage solenoid that connects between the positive battery terminal and the positive battery cable on the towed vehicle. Electric from the motorhome is provided to the solenoid through the taillight wire in the towed vehicle’s electrical harness, which is then distributed to the battery (positive battery terminal connection) and the rest of the vehicle (positive battery cable connection). To activate the Automatic Battery Disconnect, the motorhome’s headlight switch must be turned on (at least halfway), which will provide power to the disconnect system. When the harness is disconnected from the motorhome, the vehicle’s battery operates normally.

My Experience
Over the years, I have tried using only a charge line from the motorhome chassis batteries to the towed vehicle battery, with varying degrees of success. Sometimes this would work, and other times the battery would not start the car.

When traveling in the motorhome, my wife and I like to stop every one to two hours, walk around a bit, and check the motorhome and car. During the afternoons, we would start the car and let it idle for a while. This routine most often would keep the battery sufficiently charged, but not always. With various vehicles I have used the battery disconnect switch with good success, but you need to do the right thing in the right sequence.

I purchased and installed the Toad-Charge and have used it on one short trip. The car battery did increase 0.2 volts during this 90-minute trip, so initially it appears the system works. More information can be found at the company’s Web site, www.lslproducts.com.

A reminder that anytime you are working on a battery, be cautious and make sure to wear gloves and eye protection.

Cooking On The Go: How Dry I Am