Many professional rodeo cowboys, as well as fans, are using motorhomes to travel to rodeo events.

Rodeo cowboys and spectators alike have discovered the advantages of traveling and living in motorhomes.

Motorhome owners don’t need to be sold on the benefits of using their coaches for leisurely trips, family visits, snowbird stays, and more. Athletes and sports enthusiasts who need to tote themselves and their gear from venue to venue also find motorhomes to be the perfect travel vehicle in which to do so.

Take the world of competitive rodeo. Trevor Brazile, the “King of Cowboys,” is a nine-time all-around world champion and has used a high-line diesel pusher to travel to various rodeo events with his crew. He is just one of many rodeo cowboys and others who use motorhomes for this purpose.

To better understand the juxtaposition of motorhomes and rodeo cowboys, I recently attended the Pendleton Roundup, a popular annual event in Pendleton, Oregon, that started in 1910. While there I visited with rodeo cowboys, fans, and others who help put on this multi-day extravaganza. My mission: to find out about the folks who use a motorhome to facilitate life in the world of the professional cowboy.

Every year during the second full week in September, cowboys, cowgirls, fans, and a supporting cast converge on this small Oregon town, where they carry on a Western tradition rated as one of the best rodeos anywhere. The Pendleton Roundup, an event sanctioned by the Professional Rodeo Cowboy Association (PRCA), brings approximately 50,000 people to a town that boasts a population of less than 20,000 the rest of the year.

As an auto racing enthusiast, I couldn’t help but compare the profressional rodeo circuit with NASCAR. I discovered that the similarities between the two are strong. Instead of 43 stock cars turning left at speeds approaching 200 mph, professional rodeo cowboys do equally daring things, such as sitting on the back of a 1,200-pound bucking bronco or a 2,000-pound bull for 8 seconds; jumping from the back of a horse to wrestle a 450-pound steer to the ground; roping and tying calves and steers; racing horses bareback at full throttle around the arena; competing in barrel racing and wild-cow milking contests; and other kinds of non-mainstream stuff.  One thing that both NASCAR and rodeos share: once you are bit by the bug, there’s no trying to deny it.

While immersing myself in the varied Pendleton Roundup events, I talked to a variety of folks. They included two Pendleton Roundup ropers — one a team roper and the other a steer roper.  Another man I met helps prepare food and cook for the guys known as “pickup men.” Pickup men are expert cowboys involved in “roughstock” events, managing the bucking horses and bulls. They are in the arena, ready to rescue the saddle and bareback bronc riders from the backs of their horses if they make a successful 8-second ride.  They also release the flank straps on the horses after their competition is completed.

One Oregon cowboy I talked with arrived in Pendleton with his best friend (his pooch) to attend all four days of rodeo events. I talked with one old-timer who takes care of the draft horses and mules that appear in the rodeos and the parade. Here are their stories. 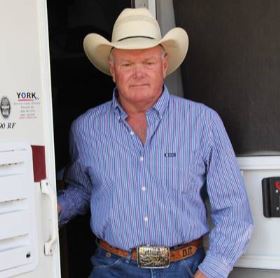 When I asked Buster Record Jr., an Oklahoman, how long he’s competed in rodeos, he glanced up and off to the side as though crunching numbers in his mind. Finishing his calculations, he said he figured he’s been at it for about 40 years. At one time, Buster participated in as many as 40 to 50 rodeos each year, but nowadays the number has been scaled back to roughly 25 rodeos annually. He started in team roping before progressing to steer roping. It’s obviously in his DNA, as it seemed to be with all the rodeo cowboys and enthusiasts with whom I talked.

Steer roping is a single-person event in which the cowboy, riding atop a speeding horse, ropes a steer (which weighs 450-plus pounds) around its horns.  Jumping off the horse while keeping the rope taut, the cowboy throws the steer down and ties three legs together with a length of rope he carries between his teeth.  The cowboy throws his arms up to indicate he has completed tying the steer.  The steer must stay tied for 10 seconds to make it official.  Winning times are generally 13 to 15 seconds from the time the steer breaks the timing barrier and sets off the clock until the cowboy signals he is done. When executed correctly, steer roping is poetry in motion.

In between writing this kind of poetry, Buster uses his Type C motorhome to make life on the rodeo circuit a comfortable and routine process.  It also enables him to tow a horse trailer with his roping horses to the next venue. 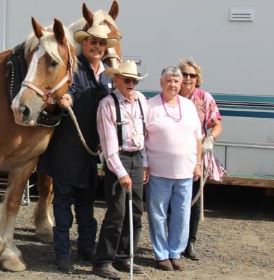 Jim’s first Pendleton Roundup was as a kid back in the 1930s. He attended the event with his dad, who looked after the many mules that were needed for the various events.  Jim and his wife, Naomi, now octogenarians, have continued the tradition. When we met, they were on their third motorhome.  All three of their RVs have been used to pursue their passion: follow the rodeo circuit and assist behind the scenes. During the Pendleton Roundup, the couple’s motorhome was parked adjacent to the barn where the livestock were sequestered.

During this particular rodeo, Jim and Naomi were responsible for the care and feeding of approximately 20 draft horses and a half-dozen mules, all of which were used in the pageantry-filled presentations that took place during the week.

The rodeo/motorhome lifestyle has played an important part in the couple’s lives and that of their family. They recalled the years their granddaughter attended college on a rodeo scholarship and they traveled to events all across the Northwest, towing her horses in a trailer behind their motorhome.

Most people probably would never guess that behind the scenes, adjacent to the huge corrals where the Texas longhorn cattle and the roughstock (the broncos and bulls) are kept, a city of sorts springs up. This is where the Pendleton Roundup pickup men assemble during the week’s festivities.  The Roundup support folks take good care of these guys by preparing gourmet meals for them throughout their stay.

Wyatt Brown, who hails from Portland, Oregon, brings his Country Coach motorhome and sets up as the sous chef to help in the preparation of this cowboy cuisine.  He assists Pendleton resident Jim “J-Man” Harrison, who has been cooking for these pickup men for years. And when it comes to the food served at “J-Man Camp,” nothing is held back.
In addition to performing cooking duties during the Pendleton Roundup, Wyatt also assists Jim at the annual rodeo in St. Paul, Oregon. 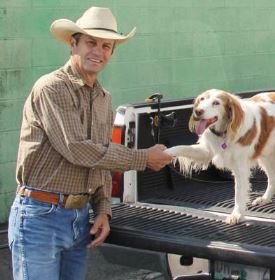 You can tell how important the Pendleton Roundup is to someone when they can click off the exact number of times they’ve missed it. For Clark White, who lives near Pendleton, that figure is 14, which accounts for the years he was away in the Air Force. He has owned three motorhomes over the years: a Fleetwood Bounder, a Shasta, and a Newmar Dutch Star.  We met up with him in one of the several parking areas that are reserved for RV/rodeo enthusiasts.

Clark travels with his dog everywhere he goes, which the motorhome makes a more comfortable process. In addition to the Pendleton Roundup, they attend the Frontier Days Rodeo held each year in Walla Walla, Washington. 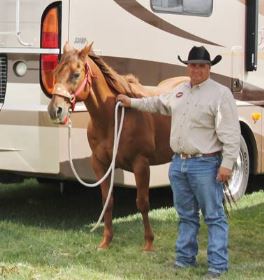 Allen is not just a team roper, but a “heeler” — the cowboy who ropes the rear legs of the steer after the “header” has lassoed the steer’s horns. In the lightning-quick world of rodeo events, the time it takes to win this one is around 5 seconds.

Allen purchased a Fleetwood Discovery diesel pusher in June. In the ensuing months, he lived on the road with his wife and their teenage son (who has competed in the Junior High National Finals Rodeo in Gallup, New Mexico), traveling from rodeo to rodeo. They tow a trailer that can haul up to four horses.  As we chatted, a dozen cowboys, which Allen calls his “extended family,” were inside the Gills’ motorhome watching rodeo videos.

Allen has slowed down a little.  He now competes in only a dozen rodeos a year.  In his younger days, he competed in an average of 45 each year.

I came away from the Pendleton Roundup with a deep appreciation for this fast-paced, high-adrenaline sport. It also was eye-opening to witness the passion so many folks have for the world of rodeo. And I couldn’t help but think that with a motorhome in tow, the rodeo experience is made even better.

The Wild West is alive and well in Pendleton, Oregon, an old cow town situated in the eastern part of the state along the Umatilla River, where ranching and farming predominate. Settlers passed through Pendleton while traversing the Oregon Trail in the 1840s.

The first Pendleton Roundup took place in September 1910. According to a historical account, it was billed as “a frontier exhibition of picturesque pastimes, Indian and military spectacles, cowboy racing and bronco busting for the championship of the Northwest.” Stores closed for the event, and 7,000 people assembled in town.

Today close to 50,000 attend the four-day extravaganza. Much like FMCA rallies and Family Reunions, the Pendleton Roundup is successful thanks to a large contingent of volunteers.

For more information about the Pendleton Roundup, visit www.pendletonroundup.com.

A Lap On The Track