America’s most renowned architect left his mark on the landscape of a Florida institution of higher learning.

Buildings on the campus of Florida Southern College in Lakeland, Florida, have attracted the attention of the prestigious Princeton Review and Architectural Digest because of their amazing designs. Frank Lloyd Wright, the architect responsible for 10 buildings and two structures at the school, called the campus a “child of the sun.” Florida Southern College features the world’s largest single-site collection of this iconic architect’s structures.

Wright, whose organic style embraced nature, carved this campus out of an orange grove that overlooked the shores of beautiful Lake Hollingsworth. How it happened is a story of vision, determination, and perseverance on the part of two great men — Wright and Florida Southern College president Dr. Ludd M. Spivey.

Spivey envisioned a uniquely American college campus — with a look that he hoped would draw national attention to the small institution. In an April 1938 telegram to the world-renowned architect, Spivey bluntly stated, “Desire conference with you concerning plans for great education temple in Florida.” Wright, who by then was almost 70 years old, wired Spivey to visit him at Taliesin, his home near Spring Green, Wisconsin. And so began a 20-year relationship between Wright and Spivey that resulted in the creation of buildings and structures that many experts say provide an extraordinary opportunity to view and understand all of the components of Wright’s distinctly American architecture.

From the beginning, it was a war between the two men over money, construction timetables, construction methods, and fund-raising. But they liked and respected each other. Indeed, the Florida Southern College commission was the longest lasting of Wright’s remarkable career.

Spivey had to find contributors — a challenge, as the country was just rebounding from the Great Depression. But the dynamic educator was determined to succeed. Recognizing Wright’s presence as a key to getting public attention, Spivey arranged speaking engagements for him almost every time he visited the campus. Wright protested Spivey’s use of him for what he termed “your propaganda,” but he understood the reason and cooperated. 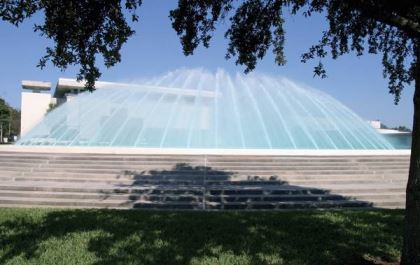 What is truly amazing is that student labor was used to construct the first three of the new buildings and part of the 1.5 miles of covered walkways, called esplanades, that connect them. The students even made the concrete building blocks, which were produced in molds from local sources of sand. In exchange they received free tuition — working three days and attending class three days. One of Wright’s on-site supervisors complained when the students left for their Thanksgiving break. But again, Wright understood Spivey’s need for economy and cooperated.

In 1941 the first building was completed: the Annie Pfeiffer Chapel. It is the hallmark of the Wright buildings on the campus and considered a true specimen of his architectural style. Its steel and concrete tower, affectionately called the “bicycle rack in the sky,” is the most identifiable object on campus. Most of the 50,000 handmade blocks that make up the chapel’s lowest level contain cubes of different-colored glass. Wright’s constant goal was to remove barriers between a structure’s inside and outside — in this case, the glass lets in nature’s light.

World War II almost put an end to the project. Enrollment at the college dropped by 40 percent, fund-raising was impossible, and building materials were in short supply. Spivey wrote to Wright, “The war is closing in on us. I do not know how long we can carry on.” Shortly after that, he wrote again to explain, “I am sorry to tell you that it is not possible for this college to send you any more money at this time. I do not even have the money to pay my teachers.”

But the little college did survive the war. Student enrollment rebounded, contributors were secured, and Spivey urged Wright to prepare the final plans for more of the proposed buildings. In all, 10 buildings and two structures designed by Wright were completed, with work on the final one concluded in 1958.

During one of his visits to the campus, Wright described the buildings as rising “out of the ground, and into the light, a child of the sun.” On another occasion, Wright told his audience, “This architecture represents the laws of harmony and rhythm. It’s organic architecture and we have seen little of it so far. It is like a little green shoot growing in a concrete pavement.”

The semicircular E.T. Roux Library was completed in 1945. It is today named the Thad Buckner Building and is the location for the Child of the Sun Visitors Center and Esplanade Gift Shop. Wright trademarks such as clerestory windows, fireplaces, and geometric shapes are all on display in this building.

The William H. Danforth Chapel, completed in 1955, is an excellent example of Wright’s work in leaded glass. Framed in native tidewater red cypress, the chapel still contains the original pews and cushions designed by Wright and built by the students.

Wright personally supervised the construction of the Emile E. Watson-Benjamin Fine administration buildings, which were completed in 1948. The esplanades weave the buildings together and the courtyard pool area continues his pattern of water, its presence and its sound, in the buildings.

The Lucius Pond Ordway Building, completed in 1952, was said to be Wright’s favorite because of the simplicity of its design. The Polk County Science Building was the last Wright structure built on the campus. Finished in 1958, it contains the only planetarium Wright designed that was ever constructed.

A line of 1 1/2 miles of esplanades connect the Wright buildings on the west campus. In contrast to their massive supporting piers, the esplanade roofs are made of thin concrete slabs trimmed with copper fascia. They blend perfectly into the landscape, as Wright designed them unusually low. In some places, the roofs are only 6 1/2 feet from the ground.

Spivey concluded his job as president of the Methodist Church-affiliated liberal arts college after 32 years, retiring in 1956. His vision, drive, and determination had been remarkable. He had overseen the growth of the college from an enrollment of 100 students to a record 2,300, and he is recognized today as the person most responsible for the college’s success.

Frank Lloyd Wright died in April 1959 at the age of 91. In 1991 the American Institute of Architects recognized him as “the greatest American architect of all time.” During his last visit to the campus in 1957, Wright spoke to a gathering at the Annie Pfeiffer Chapel, saying, “Someday, Florida Southern College is going to be notable, cherished in history, because it … has shown the way in denoting poetic principle … an architectural culture of its own.”

In the years since, the buildings have required some change. For example, the Water Dome, completed in 1948, was a circular water basin 160 feet in diameter. It was supposed to be ringed by copper pipes with holes that would shoot pressurized water up to 50 feet into the air toward the basin’s center. However, inadequate plumbing was installed, and it never worked. Eventually, the basin was largely paved over.

In 2006 the college decided to reconstruct the Water Dome. The concrete was removed and a special construction team consulted the Frank Lloyd Wright archives in an attempt to understand the architect’s intentions. Proper plumbing was installed, and in October 2007 the reconstructed Water Dome was officially inaugurated. Today it dominates the core of the west campus, with high-pressure water jets propelling water upward, just as Wright had planned.

The collection of campus buildings is listed in the National Register of Historic Places. With the help of state and federal grants, the college is making a heroic effort to preserve the historically significant architecture while keeping it accessible to the public.

Lakeland is located between Orlando and Tampa in central Florida, along Interstate 4. The Child of the Sun Visitor Center and Esplanade Gift Shop is located in the Thad Buckner Building, 948 Johnson Ave., in Lakeland (863-680-4597; www.flsouthern.edu).

From Interstate 4, take exit 32 (U.S. 98 South). The name of the street changes to South Florida Avenue. Follow it past the downtown area; turn left on Frank Lloyd Wright Way; travel six blocks to the free parking lots on the corner of McDonald and Johnson. Take your towed car if possible, unless you visit when school is not in session.

The visitors center is open 9:30 a.m-4:30 p.m. daily, and self-guided walking tours are free. A basic one-hour guided tour costs $20 and is offered daily at 10:00 a.m., noon, and 2:00 p.m. Reservations are suggested. A two-hour in-depth tour includes everything in the one-hour tour, plus gives entry to all the structures where possible. It is offered daily at 10:30 a.m. and 1:00 p.m. and costs $35. Reservations are suggested.

Discounts for booking a tour by e-mail, or for seniors, active military, and AAA members are available. To schedule a tour, call (863) 680-4597 or e-mail fllw@flsouthern.edu.

This is not a complete list, so please check your campground directory or the RV Marketplace, available online at FMCA.com and in the June and January issues of FMC, for additional listings.

Camp-Style Apple Pie With A Dash Of History