Colter took cues from ancient Indian dwellings and from the Grand Canyon itself when designing tourist structures there.

Shops, towers, and tourist stops at Arizona’s most famous destination were designed to look like part of the landscape.

Consider this: The most iconic of all tourist attractions in the United States, the Grand Canyon, as we know it today, was almost lost to us. It wasn’t until 1908 that President Theodore Roosevelt, using the Antiquities Act, declared the canyon a national monument. In 1919 it became a national park.

Tourists began to trickle in to the Grand Canyon in the late 19th century, enticed by the tales of John Wesley Powell’s epic exploration of the Colorado River, which runs through the canyon. A rustic hotel and tent camp arose on the rim, and private enterprises built a trail down to the river. But not until the Atchison, Topeka, and Santa Fe Railroad built a line to the rim did tourism really explode, bringing hospitality entrepreneur Fred Harvey and his designer and architect, Mary Elizabeth Jane Colter, to create lodgings and curio shops.

Born in Pittsburgh, Pennsylvania, in 1869, Colter moved with her family quite frequently when she was young before they finally settled in St. Paul, Minnesota, when she was 11. Colter studied art and design in the West and was heavily influenced by the Arts and Crafts movement of the time. She was not interested in the European ideals of architecture then in vogue. She felt they did not fit in the wild and expansive land of canyons and mesas, and she looked to the ancient Anasazi and Pueblo Indian cultures for inspiration. Why shouldn’t tourists be educated as well as entertained? she reasoned.

After spending several years back in St. Paul teaching mechanical drawing, Colter took a job in 1902 with the Fred Harvey Company. Her first architectural creation for Fred Harvey was the Grand Canyon’s Hopi House in 1905. This building was based on those found in Oraibi, a centuries-old village snuggled in the parched mesas of the Hopi reservation.

The Hopi believe the first people emerged from the Grand Canyon, so the Hopi House seemed a natural place for artisans to live, work, and sell their crafts. Workers used available sandstone and rough-hewn timber to create small rooms with low-slung ceilings and tiny windows. Corner fireplaces and display niches were built in. Hopi House still contains the works of many local artisans, but one would hesitate to call this beautifully preserved building a gift shop; it’s more a museum.

The latest addition to this “museum” is a salute to Colter herself. On the second floor the National Park Service has installed a wall-sized timeline illustrating her work. The timeline makes it easier to understand and appreciate when, where, and how the architect created this and other iconic Grand Canyon landmarks. 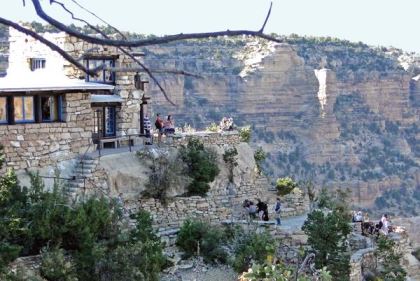 After Hopi House, Colter moved on to other projects for the Fred Harvey Company. She returned to the Grand Canyon in 1914 to create Lookout Studio. Designed as a viewpoint, the tower blends with its limestone surroundings. Committed to maintaining the integrity of the canyon rim, Colter spent months researching and climbing around the towers at Hovenweep. Eventually she created the perfect replica of a crumbling ancient ruin. The focal point of the rustic interior is a huge fireplace and balconies with high-powered telescopes. Twisting paths rim the cliff face and offer quiet spots from which to contemplate the canyon.

In 1914 Colter also completed Hermit’s Rest at the west end of the canyon. It was a stop for Fred Harvey’s sight-seeing carriage rides along the rim. She created this spot based on the true story of a reclusive mountain man who once led tourists down through the canyon. The resulting jumble of rocks that seem to emerge from the canyon belie the great care and research that she lavished on the project. This intricate structure of massive stones is supported by rough-hewn logs and a latilla ceiling (wood pieces laid between beams). High casement windows throw natural light onto an enormous medieval-style fireplace alcove that looks as though it’s covered with years of soot and smoke. When the building opened, Colter was teased, “Why don’t you clean up this place?” She laughed, “You can’t imagine what it cost to make it look this old.”

Perhaps the most painstakingly complicated of all of Colter’s Grand Canyon buildings is the Desert View Watchtower, approximately 25 miles east of Grand Canyon Village. Created in 1932, it provides unparalleled views of the Colorado River and the Painted Desert.

Again, Colter spent many months in preparation, studying the ruins around the Southwest, and even chartering a plane to find them from the air. She took rocks from throughout the area to build this 70-foot-high tower, which she based on one at Mesa Verde. The round building attached at the bottom was patterned after the kivas of the ancient Puebloans.

The rocks of the tower hide its steel framework. The weathered appearance of imperfections and stress cracks was deliberately created, and the banded stones were taken from those found at Chaco Canyon. Stones pecked with petroglyphs were carefully placed around the main entrance. Workers were told to search for rocks that would naturally fit together, rather than cut them to size; it was a painstaking process, but it created the weathered appearance that Colter wanted.

Driven by a desire for authenticity, Colter was not beyond having her “boys,” as she called the workmen, tear down a course of rocks if they didn’t fit the look. She was particularly proud of the ceiling in the kiva room, as it included logs salvaged from the Grand View hotel, which once stood at the edge of Grand Canyon at Horseshoe Mesa.

Colter hired Fred Kabotie, a Hopi artist who worked on a number of her projects, to paint scenes of Hopi legends on the interior of the tower. The two artists battled over the color scheme, but these frescoes remain as exciting and vibrant as they were 80 years ago.

Colter’s style sometimes could be called “National Park Service Rustic.” Bright Angel Lodge, a middle-class alternative to the classic El Tovar hotel, is one example. It was built on the site of the old Bright Angel Hotel and tent camp in 1935. First, a 6-foot-long model was constructed, meticulously placing the lodge, the cabins, and every bush, rock, and tree in perfect harmony with the canyon rim. A single gabled structure of stone and logs is at the center of a community of adobe and log cabins, two of which she saved for their historic value — the Red Horse Station cabin, an old stagecoach stop, and Buckey O’Neill’s log cabin. O’Neill was a local character: a politician, newspaperman, adventurer, sheriff, judge, and soldier. While serving as the latter, he unfortunately met up with a bullet in 1898 with the Rough Riders in Cuba.

Like the pioneer homes of the time, the gabled roof of the Bright Angel Lodge extends to create a covered front porch, supported by enormous peeled logs. The interior is made of hand-hewn timber, with viga and latilla ceilings and flagstone floors. Feature walls were painted by Fred Kabotie, and the stone fireplace in the lounge was created by a park service naturalist in the same rock strata as the canyon outside.

A cluster of Colter buildings on the floor of the Grand Canyon make up Phantom Ranch. Rustic cabins and a main lodge were completed there in 1922. They are accessible only to visitors who reach the bottom of the canyon either by raft, mule, or foot.

Mary Elizabeth Jane Colter’s buildings were so skillfully constructed that they have indeed become part of the landscape, blending so well as to appear commonplace. It’s only upon closer inspection that you’ll discover this amazing legacy that deserves its place among the greatest in the country.

Several articles and a few books have been written about Mary Colter. The book Mary Colter: Builder Upon the Red Earth by Virginia L. Grattan is a popular introduction to the architect. More information about Colter’s works and other landmark historic structures at the Grand Canyon is available from Grand Canyon National Park, (928) 638-7888; www.nps.gov/grca/

Stars And Stripes, Bells And Whistles