By James and Dorothy Richardson
July 2014 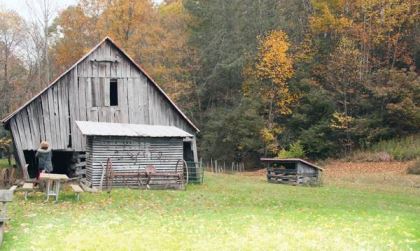 Travelers often overlook smaller towns when seeking vacation destinations. Such might be the case when planning a trip to Tennessee. Nashville, Memphis, Knoxville, and especially the Smoky Mountains may first come to mind. RVers who enjoy history and outdoor recreation also should consider Tennessee’s Tri-Cities — Johnson City, Kingsport, and Bristol — tucked away in the northeastern tip of the state.

Generally, Greeneville, Elizabethton, and Jonesborough also are included in the Tri-Cities area, because of their proximity. And their historical ties make them even more closely bound. This area played an important role in the state’s formation, as well as the country’s. Among others, Andrew Johnson, the 17th president of the United States, and Davy Crockett, the famed frontiersman, made this area their home.

The outdoorsperson will find plenty to do in northeastern Tennessee. The Appalachian Trail crosses the Blue Ridge Mountains in nearby Cherokee National Forest. Roan Mountain State Park; Bays Mountain Park; and the Nolichucky, Holston, and Watauga rivers provide visitors with ample opportunities for outdoor recreation. For travelers wanting to watch, not participate, in the outdoors, but still get their adrenaline going, the famed Bristol Motor Speedway draws thousands of visitors to its many events.

History lovers can tour homes from early settlements that bring to life events that shaped the state and country. These homes provide a glimpse of early American life. Settlements such as the Tipton-Haynes State Historic Site in Johnson City and Exchange Place in Kingsport fit this category. In Greenville, the Doak House Museum at Tusculum College (the oldest college in Tennessee) and the Andrew Johnson National Historic Site help to better our understanding of history.

Tread outside the Tri-Cities triangle a bit and head to Greeneville, southwest of Johnson City (approximately 32 miles away, via U.S. 321/11E), where you will find the Andrew Johnson National Historic Site. The complex includes a visitors center, Johnson’s early home, the Andrew Johnson Homestead, and the cemetery where he and his family are buried. The visitors center offers a brief introductory film, brochures, and directions, as well as the presidential museum and Johnson’s original tailor shop.

Johnson lived in the early home during his transition from tailor to politician, and he owned the homestead for 24 years, both before and after his presidency. During the Civil War, the Confederacy confiscated his property and soldiers occupied the house. After the war, and their return from Washington, D.C., the Johnson family renovated the home.

While traveling back toward Johnson City, take U.S. 321/11E and drive approximately 15 miles. Soon you’ll come to Davy Crockett Birthplace State Park. The 105-acre grounds feature a museum and a replica of the cabin where Crockett was born in 1786. He rose from poverty to become a U.S. congressman and later fought and died at the Alamo in 1836.

A few miles east of Johnson City is Elizabethton, which contains other historical points of interest, among them Sycamore Shoals State Historic Park. During the American Revolution, Sycamore Shoals was the original muster site of the Overmountain Men, patriots from west of the mountains who fought the British at the Battle of King’s Mountain. The settlers formed an independent government, made treaties with the Cherokee Indians, and defended their homes. Park visitors can partake of a riverside trail and a picnic pavilion and view interpretive displays inside the visitors center. Behind the facility, reconstructed buildings from Fort Watauga illustrate 18th-century frontier life.

The oldest town in Tennessee is Jonesborough, a few miles west of Johnson City. Jonesborough was founded in 1779, 17 years before Tennessee became a state. Much has been done to preserve the buildings and the atmosphere of the town, which you can see during a self-guided strolling tour. One of the oldest buildings downtown now houses the Chester Inn Museum. Dr. William Chester built his inn on the stage road in 1797, and it now features exhibits related to the inn and the town’s history.

Nearby national forests as well as many state and city parks provide excellent places for hiking, biking, camping, wildlife watching, and horseback riding. Hunters can search for a variety of game, including deer, turkey, quail, and waterfowl. Golfers can choose among more than 30 courses within a short drive from Bristol, Johnson City, or Kingsport.

In Kingsport, Bays Mountain Park and Planetarium is a 3,550-acre nature preserve and the largest city-owned park in Tennessee. It encompasses a 44-acre lake; a nature center with a state-of-the-art planetarium; 38 miles of hiking trails; and animal habitats with wolves, bobcats, raptors, and reptiles. Wolf howling sessions are held regularly, during which visitors can learn to join in the call of the wild. Thrill-seekers can try the Adventure Ropes Course, which features a 300-foot zipline.
Southeast of Kingsport, Roan Mountain State Park contains 2,006 acres and is situated at the base of 6,285-foot-high Roan Mountain. Camping there includes 87 RV sites with water and electricity. Fishing for trout, hiking and biking on the park’s 14 miles of trails, and visiting the old farmstead are favored activities. The park’s interpretive visitors center, with an old-fashioned gristmill, stands beside the Doe River.

In 1780 the Overmountain Men traveled through what is now parkland on their way to fight in the Battle of King’s Mountain. A 10-mile drive to the top of Roan Mountain yields a tremendous view of the surrounding mountains and valleys. The Appalachian Trail crosses at the peak of Roan Mountain, and in June the rhododendrons bloom, attracting many visitors.

Bristol distinguishes itself by claiming to be the birthplace of country music. The city hosts many festivals, such as the Rhythm and Roots Festival. This annual event began six years ago. It showcases local music and musicians, giving tribute to the roots of country music and bluegrass. The festival takes place September 19-21 this year in downtown Bristol, with Emmylou Harris as its headliner.

The town that straddles the state lines of Tennessee and Virginia is home to another kind of sound as well: the roar of engines at Bristol Motor Speedway. The track hosted its first NASCAR race on July 30, 1961, with a seating capacity of 18,000. Since then, the seating has increased to nearly 160,000. Today the track hosts NASCAR Sprint Cup Series, Nationwide Series, and Camping World Truck Series races, among many others.

August 23, 2014, is the annual Irwin Tools Night Race. This nighttime NASCAR race on the half-mile track is said to be a one-of-a-kind experience. Contact the speedway (see information below) to check ticket availability.

Adjacent to the NASCAR track is the Bristol Dragway, which opened in 1965 and seats approximately 25,000 people. Because the drag strip is situated between two mountains, acoustics and cars have combined to give this place the name Thunder Valley.

If you can imagine the need for accommodations, it will be apparent how important campgrounds are for visitors. The speedway owns and manages five campgrounds on the property.  All amenities are included in the price and are available only to campground patrons. In addition, the speedway offers an all-inclusive RV rental program for race guests, and it sells out quickly. Numerous private campgrounds also are available, but reserve early if you plan to attend a race.

If history and outdoor recreation are favored subjects in your family when you choose a destination, the Tri-Cities of northeastern Tennessee should be considered. Don’t overlook the smaller places when you think of Tennessee.