When Victor and Jessica King opened Lake George RV Park in Lake George, New York, in 1966, it was one of the most modern campgrounds in the United States. Each of its then-200-plus campsites had 30-amp electric connections, water, and sewer service, which was almost unheard of.

“We’ve always tried to create a camping environment that was ahead of the industry,” said David King, the park’s second-generation owner. Lake George RV Park has continued to develop new amenities, activities, and entertainment, including live music; animal and reptile shows; nature workshops; and performances by magicians, hypnotists, and illusionists. 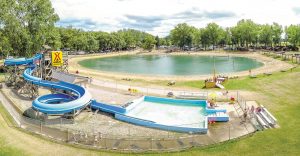 A 220-foot-long double-loop waterslide is a featured attraction at the Monroe County/Toledo North KOA in Petersburg, Michigan.

But the King family’s latest addition could be its biggest yet — a $5 million aquatic park called Cascade Cove, which opens this summer. Mr. King said he has been rushing to complete it this year as a way to celebrate what would be the 100th birthday of his father, who died six years ago.

Cascade Cove will feature a zero-entry swimming pool, with a gradual slope from the deck to the water; hot tub clusters that can seat up to 38; and a water play area with 32 interactive spray features, a dumping bucket, and a 34-foot-long enclosed, twisting slide. Mr. King said guests repeatedly have asked him to install new water features to replace some of the park’s three existing aquatic areas, which were built between 1966 and 1976.

That trend is visible across North America as consumers seek campgrounds with special water features. Overall, relatively few public and private campgrounds offer such perks. However, a growing number are installing everything from spray grounds to aquatic play structures to water slides.

Campgrounds are seeing the benefits of such investments. “Our business has absolutely increased,” said Kristie Kuper, who co-owns the 200-site Thunder Bay KOA in Shuniah, Ontario, with her husband, Michael. Two years ago the Kupers installed a 10,000-square-foot aquatic fun zone. It includes two water cannons, four dump buckets, and a computerized sequence of 24 jet sprayers. “It draws the family,” Ms. Kuper said. “We now cater to the younger children as well. We have two big heated saltwater pools in the same area as our splash pad.” 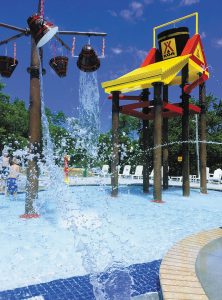 The aquatic park that opened in 2017 at the Indianapolis KOA in Greenfield, Indiana, has been credited with boosting business.

The Indianapolis KOA in Greenfield, Indiana, opened an aquatic park last year that includes a zero-entry swimming pool. Manager Rachel Vaughan said business has increased, in part because grandparents like a place they can take their grandkids. 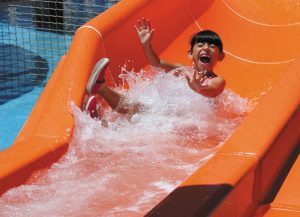 The park includes more than 28,000 square feet of water surface, which is more than twice the area of an Olympic-size pool. Features include a four-lane racing slide and a 705-foot-long Adventure River, in addition to kiddie pools with water guns and water buckets.

Ocean Lakes borders the Atlantic Ocean, but Ms. Krumm said some guests prefer the park’s pools and special water features over the beach and swimming in the ocean. “Some people like being able to sit and not get sand all over them,” she said.

The park caters to a variety of ages and interests, Ms. Krumm noted. Children and their parents may enjoy the racing slides, for example, while seniors often like to float in the “lazy river” water ride. Meanwhile, those who want to go to the beach can do so. 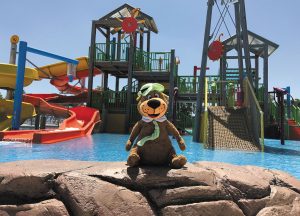 New waterslides are expected to open this summer at the interactive water zone at Jellystone Park Guadalupe River.

Campgrounds affiliated with the Jellystone Park network have been particularly enthusiastic when it comes to installing splash pads, water slides, and other aquatic parks. Roughly half of the 84 Jellystone Park campgrounds have significant water features. More will open or are being expanded this summer, according to Michele Wisher, vice president of marketing for Leisure Systems Inc., which franchises the Yogi Bear-themed parks. They include the following Jellystone Parks:

The park plans to have a water zone with 165-foot-long water slides, two kiddie water slides, 13 water blasters, two water cannons, and a “hydro storm” bucket that periodically dumps 750 gallons of water on anyone standing beneath it. Golden Valley has been undergoing extensive renovations; a spokeswoman for campground owner Northgate Resorts said the water zone may not be completed until the spring of 2019, when RV sites also will be ready.

Two family tube waterslides open this summer at the park-owned Pirates’ Cove, an aquatic park adjacent to the campground. The slides are 65 feet tall and 350 feet long.

The park installed a 19,641-square-foot interactive water zone in 2017. It includes two kiddie water slides; three water slides with lengths of 20 feet, 160 feet, and 165 feet; two water cannons; 13 water blasters; and a 750-gallon “hydro storm.” The park owner, Northgate Resorts, plans to open three new waterslides this summer, one of which is a racer with two lanes. They range from 196 feet to 334 feet long.

This campground is scheduled to open a 40,000-square-foot water play park by the Fourth of July weekend. It will include two 165-foot-long water slides, two kiddie water slides, 13 water blasters, two water cannons, a 750-gallon “hydro storm,” and a 127,000-gallon lazy river. 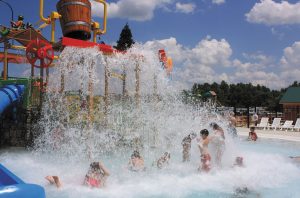 The campground planned to open an 11,000-square-foot Kids Water Zone in June with five slides ranging in length from 25 to 45 feet, as well as 23 bubblers and fountains and a “rain tree.”

Some parks have installed other water play attractions. In 2016, for example, the Jellystone Park at Keystone Lake in Mannford, Oklahoma, opened a Wibit, a floating aqua park that’s 160 feet by 200 feet. Appearing like a collection of rafts, it includes obstacle courses, a trampoline, monkey bars, and slides. 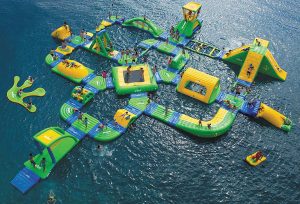 Wibit is a floating water park at Jellystone Park at Keystone Lake in Mannford, Oklahoma.

“It has to be out in deep water because of the slides,” said park co-owner Beth Ryan. “It’s very challenging.”

Ms. Ryan also co-owns and operates the 400-site Lake Huron Campground in Carsonville, Michigan, which has a new water fun zone that opened in May 2018. It features an activity pool with areas to play basketball and volleyball in the water, as well as floating toys. It also has a kiddie pool with spray features and mini slides. She said reservations for Lake Huron Campground are up 30 percent since the attraction was installed.

Not Just For Kids

The Mount Rushmore KOA has a splash park, while the Monroe County/Toledo North KOA has a 220-foot-long double-loop waterslide that’s popular with both adults and children. Guests who use the waterslide end up in a 5-acre lake.

“One of our top selling items in our store is blow-up rafts and inflatables they can use on the lake,” Ms. Wathen said.

This summer, Jim Adams will be one of many campers heading to a favorite campground to try the newest water features. Mr. Adams is a Dallas-area resident who frequently takes his 5-year-old granddaughter to the Jellystone Park in Tyler, Texas, which is installing a water zone for kids.

“We honestly can’t wait for the new water play area to open up,” Mr. Adams said. “Our granddaughter was looking at photos of the construction of the water play area on the park’s Facebook page. She was excited.”

Know Before You Go

Before you plan a trip to a campground with water features, make sure you know the operating hours and season for aquatic park operations, as schedules vary depending on the location and the availability of lifeguards. As noted, some water parks may still be under construction. If you have young children, check the height and weight requirements of the park’s waterslides, as well as other restrictions, before they take the plunge.

Oh Buoy, Can This Guy Ski!

Meet You In Quartzsite!

The Outdoor Group For Gals Only