The Columbia Basin Cruisers have fun exploring the Northwest. The group stopped at a historical home museum in Colfax, Washington.

Eastern Washington RVers who know where the fun is.

The Columbia Basin Cruisers chapter started with one couple’s desire to leave behind the rain and the traffic of western Washington. Tom and Kathy Storrs moved to eastern Washington once they retired in 1995. Although they loved the laid-back atmosphere, with farmers and wind farms, Kathy really wished the area had a local FMCA chapter.

FMCA’s Chapter Services Department came to the rescue by sending out a mailing to members, based on ZIP codes, for the eastern part of the state. The chapter received its charter in 1996. RVers from elsewhere have joined as well. “We’ve had members in Idaho, Oregon, and Montana,” Kathy said, as well as several from the western side of Washington. Approximately 40 families are in the group. Rallies take place each month from April through October, but informal gatherings pop up in Quartzsite, Arizona, at the end of January. “About half of us go south for winter,” Kathy explained. “We’ve had up to 20 coaches gather down there during the big RV show. It’s fun!” 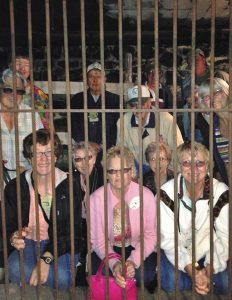 The Columbia Basin Cruisers chapter members saw the inside of a jail during The Underground Tour in Pendelton, Oregon.

Aside from holding rallies in spots all around eastern Washington, the chapter occasionally has hosted traveling rallies. One, in October, lasted 10 days. “The only complaint was that it wasn’t long enough,” Kathy recalled, laughing.

Potential members may want to visit the September 27 to 30 rally in Winthrop, Washington, at Pine Near RV Park. It’s close to amazing North Cascades National Park, and only one block away from the campground is a little Western-style town called Winthrop. “Winthrop is one of the premier tourist destinations in Washington,” Kathy said. The town has great shops and restaurants. RV spaces are still available for the chapter’s get-together there; contact Kathy or Tom Storrs at (509) 679-1878; [email protected]

The Columbia Basin Cruisers often organize rallies around events. “We have a golfing group that gets together, if there should be a golf course nearby, and the rest of us take in whatever’s going on in the area,” Kathy said. Among the more exciting “goings on” the chapter attends is the annual North Pend Oreille Down River Days in July. The event includes a parade, food, and various competitions. But it’s the snowmobile drivers who rev spectators’ adrenaline. With long skis on their machines, they zip across the waters of the Pend Orielle River at breakneck speeds.

The Columbia Basin Cruisers maintain an open-arms attitude toward newbies, and that includes those with towable RVs. And, overall, Kathy said, “We get a lot of comments about us being very friendly. It’s a fun group.”
To learn more about the Columbia Basin Cruisers, check the chapter’s website, www.cbcruisers.org, or contact Mary Jacobs at [email protected]; (360) 574-8038.

If you would like your chapter to be featured in Chapter Spotlight, contact FRV associate editor Peggy Jordan, (800) 543-3622, ext. 212; [email protected]

Family Matters: Fun For All Ages