Weighing in at less than 6,000 pounds, Winnebago’s Micro Minnie fifth-wheel is expected to appeal to owners of midsize trucks.

Winnebago Towables has introduced the Micro Minnie fifth-wheel. It will be available January 1, 2019, in five floor plans, each weighing less than 6,000 pounds.

Winnebago officials are counting on a fifth-wheel in that weight category to be popular among owners of midsize trucks, such as the Chevrolet Colorado, Ford Ranger, and Toyota Tacoma. In addition, officials hope to capitalize on the success of the 7-foot-wide Micro Minnie travel trailer, which was introduced several years ago.

Thor Industries Inc.’s agreement to acquire Erwin Hymer Group for approximately $2.45 billion in cash and equity is expected to close by the end of 2018. The deal, which was announced in September, will create the world’s largest RV manufacturer.

“This transaction provides Thor a unique opportunity to grow with the European RV market leader,” Bob Martin, president and CEO of Elkhart, Indiana-based Thor, said in a news release.

Erwin Hymer Group is headquartered in Bad Waldsee, Germany. It produces a variety of RVs — from lightweight travel trailers to high-end motorhomes — under 24 brand names. The company has more than 7,300 employees and sells through a network of 1,200 retail dealerships. For the fiscal year ended August 31, 2018, Erwin Hymer Group generated revenues of approximately $2.9 billion.

According to Thor’s press release, no changes in production facilities or employee levels are anticipated within Erwin Hymer Group or Thor. Martin Brandt, CEO of Erwin Hymer Group, will continue to lead the company once Thor’s purchase is complete. He will report to Mr. Martin.

Regency RV, based in Fort Worth, Texas, has acquired the National Traveler brand, a Type B motorhome built by Dolphin Motor Coach.

Regency RV builds the Xalta, a Type B motorhome (profiled in the June 2018 issue of Family RVing); the Ultra Brougham, described as a B-plus motorhome; and Concept One, a Type B motorhome. All are built on the Mercedes-Benz Sprinter chassis.

National Traveler will continue to be manufactured in its facility in Elkhart, Indiana. Dolphin Motor Coach expects to continue to support its remaining motorhome brands, which include the Dolphin and Cape Cod. 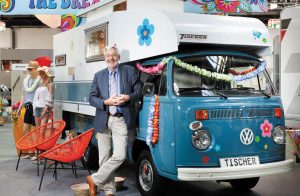 More than 2,100 RVs were displayed at the 57th Caravan Salon Dusseldorf, which set an attendance record of 248,000 during its 10-day run.

The bigger of the two, the 57th Caravan Salon Dusseldorf, is billed as the world’s largest trade fair for RVs. It set an attendance record of 248,000 during its 10-day run, which ended September 2, 2018. That surpassed the previous year’s record of 232,000.

Approximately 2,100 RVs, as well as accessories, technical equipment, components, and more were on display. More than 600 exhibitors showed their products in 13 halls and in the outdoor area of Germany’s Dusseldorf Exhibition Center. Campsites, motorhome parks, and travel destinations also were part of the show.

The 58th Caravan Salon Dusseldorf is set for August 30 to September 8, 2019. For more information, visit www.caravan-salon.com. 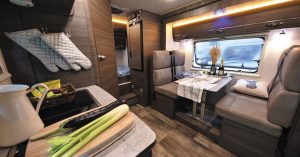 The interior of one of the 450 RVs that were on display at the seventh All In Caravaning trade fair held in Beijing, China.

In Beijing, China, the seventh All In Caravaning trade fair, held June 22-24, 2018, drew 22,193 visitors from 20 countries. Approximately 700 exhibitors displayed 450 vehicles during the show. It was organized by Messe Dusseldorf Shanghai, a subsidiary of Messe Dusseldorf, which puts on Caravan Salon.

The eighth All In Caravaning show is set for June 14-16, 2019, in Beijing. For more information, visit www.aicshow.com.

Dometic, which manufactures products for the RV industry, has teamed up with KOA Care Camps to establish the Dometic Capital Fund. The goal is to raise money to send kids with cancer to the 133 North American oncology camps supported by Care Camps.

The Dometic Capital Fund also will support events featuring race car driver Steve Arpin and country music performer Stephanie Quayle, who are lending their voices to support children with cancer and their families.

Karen McAndrew, executive director of Care Camps, said children with cancer who attend camp have improved quality of life. In 2017, requests by oncology camps for more than $300,000 for facility improvements, equipment, and expansion went unfunded, she said.

Highland Ridge RV will begin production of recently introduced Open Range, Mesa Ridge, and Highlander travel trailers in Twin Falls, Idaho, in early 2019, the company announced. The goal is to improve service to dealers in the western United States.

Highland Ridge RV, a subsidiary of Jayco, was formed in 2014 when Jayco purchased assets of Open Range RV. For more information, visit www.highlandridgerv.com.

Sixteen projects in 12 states have been awarded $4.8 million in Save America’s Treasures grants, which will help preserve historic properties and collections throughout the United States. 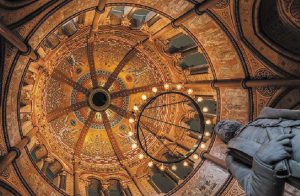 The President James A. Garfield Memorial at Lake View Cemetery in Cleveland, Ohio, is among the projects that will benefit from Save America’s Treasures grants.

Among the projects receiving funding are Victoria Mansion in Maine; Lake View Cemetery’s James A. Garfield Memorial in Ohio; and the L.A. Dunton fishing schooner, a National Historic Landmark in Connecticut.

The U.S. Congress appropriates funding for such grants from the Historic Preservation Fund, which uses revenue from federal oil leases to provide preservation assistance without expending tax dollars. The Save America’s Treasures program requires applicants to match the grant money dollar-for-dollar with funds from nonfederal sources. The award of $4.8 million will leverage more than $10 million in private and public investment.