Farm And City In Fargo

In a hangar just off the southeast corner of Hector International Airport in Fargo, North Dakota, a P-51D Mustang looks ready to escort B-17s deep into Europe, just as it did 75 years ago during World War II.

A Huey helicopter sits ready to deliver troops in support of search-and-destroy missions in the jungles of Vietnam, and a Wright Flyer waits to catch the wind on the beach at Kitty Hawk, North Carolina.

These are only a few of the airworthy birds on display at the Fargo Air Museum. The unique collection of aircraft and all things associated with flight even sports a Global Hawk unmanned reconnaissance drone with a 100-foot wingspan.

This museum is but one reason to make a stop in the Fargo-Moorhead (Minnesota) area. 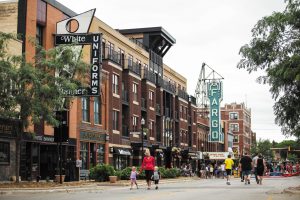 Fargo is the largest metropolitan area in all of North Dakota, and it is often the first North Dakota town travelers reach when heading west on Interstate 94. It’s conveniently located at the junction of I-94 (east-west) and Interstate 29 (north-south). Anyone heading to or from FMCA’s 100th International Convention and RV Expo, August 14-17, in Minot, North Dakota, should find it easily accessible.

Fargo is a natural stop for those getting their first (literal) taste of North Dakota. In between bites at some memorable dining spots, travelers will find plenty to see and do, beginning with a stop at the Fargo-Moorhead-West Fargo Convention and Visitors Bureau.

The visitors center offers more than just detailed tourism information. First, located just outside is the Celebrity Walk of Fame, where more than 100 luminaries — including Neil Diamond, Dr. Ruth Westheimer, and Jesse Ventura — have left handprints and footprints in cement. 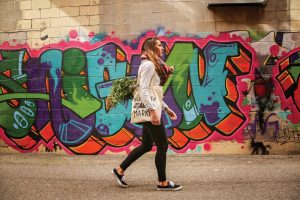 If it’s the full foot and not just the prints you’re looking for, you can find a movie prop foot inside a famous woodchipper from the 1996 film Fargo. The machine that left an indelible mark on movie-goers is now a centerpiece of lots of visitors’ photos.

That’s just the start of the adventure that will lead to arts, concerts, history, and eclectic shopping in the home of seven-time FCS football champion North Dakota State. The college football team is so popular around Fargo that you may be swept up on the wave and begin wearing green and gold before leaving town.

RV travelers have options to unhitch the trailer or pull up the motorhome in heavily wooded Lindenwood Campground, or the bigger Red River Valley Campground.

*Lindenwood Campground is a city-run facility along the Red River, which separates North Dakota from Minnesota. The campground has 47 sites with water and electricity. Showers, rest rooms, concessions, and an information center are on-site. Details: www.fargoparks.com/facilities-recreation/lindenwood-campground.html; (701) 232-3987.

For those looking for a one-night, out-of-the-RV stay, Fargo and Moorhead have dozens of lodging options, from quaint downtown hotels to national chains within the shopping corridor. Park the RV and take a different kind of break.

With home base established, it’s time to explore. North Dakota is big into history; thus, a visit to the Fargo Air Museum should be atop the agenda. In addition to static displays, special events are held there throughout the year. Many of the aircraft can and do fly, so you might see them wheeled out for a trip into the wild blue yonder. 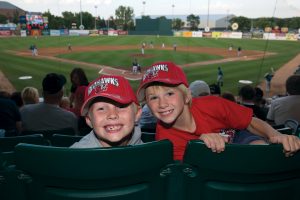 RedHawks baseball games are an inexpensive means to family fun.

After spending a morning and an afternoon at the air museum, a cool evening under the lights with the Fargo-Moorhead RedHawks baseball team may be in order. The independent minor league team plays in the American Association. Tickets are cheap, adult beverages and hot dogs are cheaper, and the baseball is solid, with several players having either played at the major league level or destined for a major league organization. Watch the sunset from a comfortable seat at modern Newman Outdoor Field on the North Dakota State University campus.

If art is more your scene, don’t let the name Plains Art Museum fool you. There is nothing plain about the largest art museum in the state, housed in a renovated turn-of-the-century warehouse. The collection contains nearly 4,000 works of art and features a rotation of roughly 12 special exhibits a year. Gallery and studio tours are available. 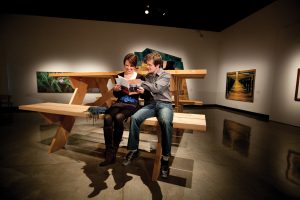 Must-see indoor collections around Fargo include those at the Plains Art Museum.

Exhibits are also a big part of Red River Valley Zoo, where 89 species of animals from around the world reside on 22 acres. Due to its location on the Northern Plains, where it can get downright cold in winter, the zoo focuses almost entirely on cold-climate species from areas such as northern Asia and northern Europe: Sichuan takin, grey wolves, pallas cats, red pandas, Bactrian camels, and more. 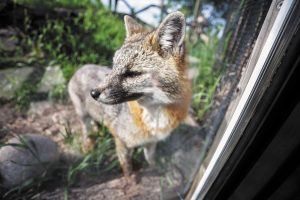 This gray fox is among visitors’ favorites at the Red River Zoo in Fargo.

No stop in Fargo would be complete without learning the history of the area, including the Red River Valley, which often is referred to as the “breadbasket of the world.”

It took hardy souls to tame the land that remains some of the flattest anywhere. It’s perfect for growing crops, except in times of flood or drought. The spirit of those who came before the current farmers is evident all around: at Bonanzaville in West Fargo; the Bagg Bonanza Farm in nearby Mooreton; and Fort Abercrombie in nearby Abercrombie. Unhitch the car or camper and take a ride into history. 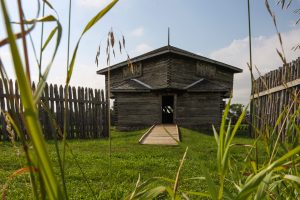 Area settlers were protected by volunteer soldiers at Fort Abercrombie in 1862, before blockhouses like this one were built.

Fort Abercrombie, just south of Fargo on I-29, was the first permanent United States military fort in what is now North Dakota. It was besieged by Sioux Indians during the U.S.-Dakota War of 1862. A modern visitors center, blockhouses, and palisades are on-site. The fort primarily was used to defend wagon trains, stagecoach lines, and steamboat traffic on the Red River.

Nearby Bagg Bonanza Farm offers a look back into bonanza farms, those that conducted large-scale wheat farming on the vast open plains in the late 19th century. Tours of the only restored bonanza farm in North Dakota include a visit through the centerpiece, a 21-bedroom main house. 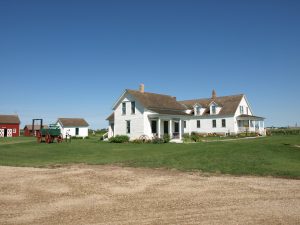 About 40 miles south of town, the area’s agricultural past is remembered at Bagg Bonanza Farm.

Bonanzaville is an ever-growing collection of historic buildings pieced together to create a turn-of-the-century prairie museum. They’re all set up along streets to form a 12-acre village. Amid the 43 buildings are several museum displays, such as the Eugene Dahl Car Museum, the Eagles Air Museum, a tractor museum, and the Law Enforcement Museum. 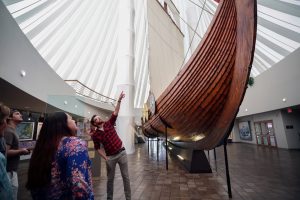 Must-see indoor collections around Fargo include those at the Hjemkomst Center, known for its replica of a Viking ship.

For a step way back into history, cross the Red River in downtown Fargo into Moorhead, and visit the Viking ship at the Hjemkomst Center, which is managed by the Historical and Cultural Center of Clay County. The ship is a replica built beginning in 1974 by a school guidance counselor named Robert Asp; its name means “homecoming” in Norwegian. Asp sailed his masterpiece from Duluth, Minnesota, into Lake Superior, but he died of leukemia before he could continue to Norway as planned. In 1982 his children finished his quest by sailing from New York City to Bergen, Norway. Afterward, the ship was returned to Moorhead. Other displays at the Hjemkomst Center include a stave church (a medieval wooden structure) and a historical home and cabin. Events and exhibitions are held throughout the year.

Visitors obviously need places to eat in between stops, and Fargo isn’t lacking for local flavor. Downtown, try Vinyl Taco and the Wurst Bier Hall. Vinyl Taco serves up Mexican street food with a heaping helping of classic rock music on vinyl. Wurst Bier Hall features a selection of classic German wursts (sausages) and other dishes. Local, regional, and seasonal beers are on tap. And ask about Das Boot (an immense, boot-shaped glass) for your group.

Meanwhile, the Boiler Room has a menu of upscale bar food served inside a subterranean bar/restaurant or below-alley-level patio. And for fine dining options, try Mezzaluna, HoDo Restaurant and Lounge, or Cork ’n Cleaver.

From Here To Minot

It’s a four-hour drive to Minot from Fargo (268 miles), so if you’re one of those 300-mile-a-day travelers, an overnight in Fargo should fit perfectly with your plans. But consider staying a couple of days, at least, to take in all there is to see and do.

Treasures Of The Yukon