All along the Missouri River, well-preserved forts and historical sites mark stops made by the Corps of Discovery as they explored the lands acquired through the Louisiana Purchase.

The Louisiana Purchase included quite a bit of acreage — 530 million acres. It took Meriwether Lewis and William Clark and their fellow travelers three years to map just a small bit. During their explorations between St. Louis, Missouri, and the Oregon coast, the group twice trekked through what is now North Dakota — on the way west and while coming home. The Corps of Discovery opened the route many people will take to FMCA’s 100th International Convention and RV Expo, August 14-17 in Minot, North Dakota. 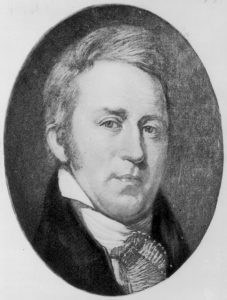 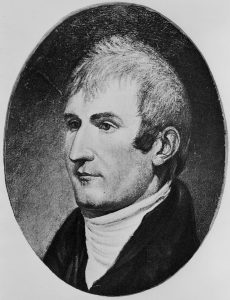 Unlike the Corps of Discovery explorers who made their famous journey between 1804 and 1806, visitors today won’t have to find a suitable place to cut wood; find rock; build a fort; hunt for wild edibles and game; traverse mounds of snow in bitter cold to visit neighbors; and shove off into the unknown. But although the methods of travel and the places to stay have changed, travelers can still gain appreciation for the hardships the expedition faced in a once-inhospitable land.

Following is a look at places that reflect the mark of these explorers, and others that existed before and after their journey. It corresponds with the route they took westward, beginning where they entered North Dakota south of Bismarck, and exiting the state west of Williston. Much of the time, their travels were on or along the Missouri River. 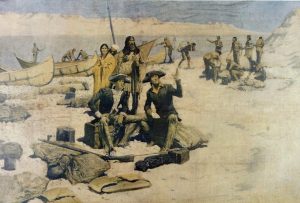 The Corps of Discovery spent more time in North Dakota than any other state.

The Corps of Discovery spent more time in North Dakota than in any other state, and overwintered there in 1804-05.

Here’s hoping some of the following Lewis and Clark-related sites, and others, correspond with your own North Dakota travel plans, and you can add them to the itinerary.

Near the South Dakota state line, State Route 1806 leads to the Standing Rock Reservation and its town of Fort Yates. The road has been designated Standing Rock National Native American Scenic Byway. As it follows the west bank of the Missouri, this excellent drive twists past buffalo herds and through Fort Yates, where the Sitting Bull Burial State Historic Site and Sitting Bull Visitor Center are located.

The Lakota Sioux chief was born near here in what is now South Dakota, and he was killed at the fort. His original burial site at Fort Yates is marked by a monument. The visitors center contains memorabilia and artwork.

One of the first sites Lewis and Clark encountered in what is now North Dakota was On-A-Slant Indian Village, which had been abandoned for many years. In 1872, Fort Abraham Lincoln was built at the site, which is south of Mandan. The two sites are must-sees today.

Fort Abraham Lincoln became the home of the Seventh Cavalry, and from there in 1876 Lt. Col. George Armstrong Custer and his men rode off into Montana, where they were defeated by Sitting Bull and others at the Battle of the Little Bighorn. Visitors can tour the Custer House, barracks, granary, and blockhouses on the bluffs above the parade grounds and river.

On-A-Slant had about 75 to 85 earth lodges, according to various estimates, several of which have been reconstructed. The population was around 1,000 to 1,500. The Mandan Indians prospered on the site for 200 years until smallpox nearly wiped them out in 1781 and they moved north to join the Hidatsa tribe. Access to the fort and village is on State Route 1806, or via the Fort Lincoln Trolley, a 9-mile railroad ride along the Heart River to the fort from a trolley station in Mandan. 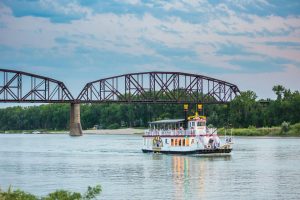 A riverboat named after Lewis and Clark plies the Missouri River from a dock at Bismarck.

The city of Bismarck, capital of the state, is full of modern-day spots to see. But Lewis and Clark and their crew walked, paddled, or portaged pirogues and canoes up the Missouri River to get to this area. You can ride on the river in comfort on the Lewis and Clark riverboat. Docking in Bismarck during the summer, the riverboat makes several daily trips, including meal excursions and sunset cruises up and down the river. Indoor and outdoor seating make it comfortable in all weather.

For a 360-degree view of the Missouri River Valley and Bismarck-Mandan, visit the North Dakota State Capitol and ride the elevator to the 18th-floor observation deck. Historical photos line the halls, and the windows provide a view for miles. While there, read about famous North Dakotans enshrined in the Rough Rider Hall of Fame.

The North Dakota Heritage Center & State Museum, right on the capitol grounds, details the history of North Dakota, from the dinosaur age to the space age. The four-gallery collection includes fossils, American Indian artifacts, and more. Admission is free. 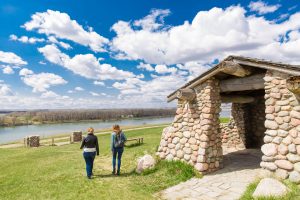 At the Double Ditch Indian Village State Historic Site, visitors can learn about the Plains Indians.

Two more American Indian villages are accessible in the area. Chief Looking’s Village is above the Missouri River in Bismarck, and Double Ditch Indian Village State Historic Site is north of the city on State Route 1804. By the way, the state highway on the east side of the Missouri River is numbered 1804, the year Lewis and Clark first came through. The highway on the west side is 1806, the year the explorers returned to the area on their way home.

Keep in mind, all sites in the Bismarck-Mandan area are accessible by all sizes of RVs with the exception of Chief Looking’s Village, which has a small parking area and limited turnaround space. 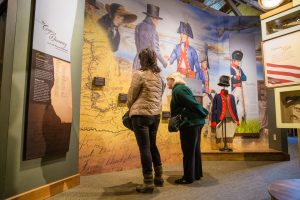 At the Lewis and Clark Interpretive Center in Washburn. the full story of the Corps of Discovery is told.

About 45 minutes north of Bismarck on U.S. 83, this town marks the place where the Lewis and Clark expedition had to stop before winter set in, in November 1804. The corps built Fort Mandan along the Missouri River and hunkered down. The Lewis and Clark Interpretive Center there contains artifacts from the tribes the explorers encountered, including those from nearby Knife River Indian Village, whose people helped the explorers survive the winter.
The center grounds boast an exact replica of Fort Mandan, with fully furnished quarters. It was built to the specifications recorded by the explorers.

North of the Fort Mandan area is Knife River Indian Villages National Historic Site, where adjoining Hidatsa, Arikara, and Mandan settlements were located in the early 19th century. The Awatixa Village is where Sakakawea (also known as Sacagawea or Sacajawea) was introduced to the explorers and joined the expedition as an interpreter who proved invaluable as the team crossed the mountains of Montana. Villagers from what is now known as the Three Affiliated Tribes befriended the explorers and provided them with food throughout the winter.

Pick City is only a few miles north of the Knife River site. This is home to Garrison Dam, one of the largest earthen dams in the United States. The dam not only forms Lake Sakakawea, a 180-mile-long playground said to have more shoreline than the Pacific Coast of California, but it is also a power plant, which is open for tours.

Lake Sakakawea is North Dakota’s largest lake and one of its best fishing spots, along with Devils Lake and the Missouri River. Several state parks and resorts with campground facilities are along its shores, which stretch to Williston near the Montana border. Hiking, fishing, and boating are some of the activities available, as is camping.

Fort Stevenson sits on bluffs above the north shore of Lake Sakakawea. It was a supply depot for other forts in North Dakota in the late 1800s. Today, Fort Stevenson State Park has a small museum that provides details about the past. Two marinas are on the lake — perhaps not surprising, as this area is known as the “Walleye Capital of North Dakota.” Fishing, boating, hiking, and bicycling are popular here, and RV camping is available as well. 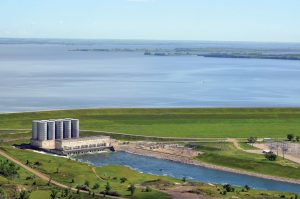 From Garrison, travel north on U.S. 83 and then west on State Route 23 to reach New Town. The Three Affiliated Tribes are based out of this settlement, which came into being after Lake Sakakawea was formed by Garrison Dam and the waters of the Missouri River.

Crow Flies High Butte, once used as a lookout by William Clark, is a high point between town and 4 Bears Casino and Lodge. Footings from the now-underwater town of Sanish are visible from the lookout, as is Four Bears Bridge, the longest bridge in North Dakota, which is adorned with images of important Indian chiefs. Cross the bridge to the casino for a cruise on Lake Sakakawea aboard Island Girl. The yacht can hold up to 149 passengers; public cruises run twice daily on Fridays, Saturdays, and Sundays. 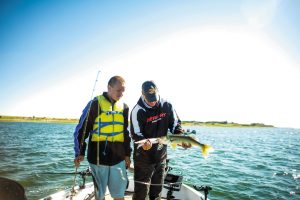 Lake Sakakawea is a popular spot for fishing.

The Three Affiliated Tribes Museum, open Monday-Friday, is situated next to the 4 Bears Casino. Displays of Indian clothing and culture-related items help explain how the Mandan, Hidatsa, and Arikara people came together for the benefit of each tribe.

Learn even more about American Indian culture at the nearby Earthlodge Village, on the Berthold Indian Reservation, where artifacts are on display and interpreters explain activities at the village.

West of Williston, where the Corps of Discovery left North Dakota and entered Montana, are three must-see sites.

The Missouri-Yellowstone Confluence Interpretive Center is just what its name implies. Located at the spot where the Yellowstone and Missouri rivers meet, the center includes a museum focused on the history of this place where traders and Native Americans coexisted peacefully.

The 10th Cavalry and 25th Infantry regiments were stationed there. These units were composed of African American troops known as Buffalo Soldiers.

After defeating Custer at Little Bighorn in 1876, Sitting Bull and his followers fled to Canada. They experienced years of hardships, so the chief returned to the U.S. and surrendered at Fort Buford in 1881. 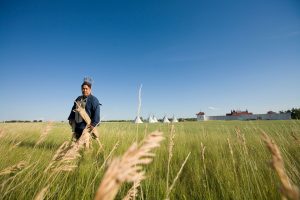 Just west of Fort Buford almost on the North Dakota-Montana state line is Fort Union Trading Post National Historic Site. The reconstructed fort represents the principal fur-trading post on the upper Missouri River between 1828 and 1867. Several North Plains tribes and fur traders coexisted peacefully at this river outpost. Special events are presented there throughout the year.

As you follow the Lewis and Clark trail, you’ll not only gain an appreciation for the hardships the Corps of Discovery faced, but also share in the thrill of finding new views — something all explorers still have in common.

The Outdoor Group For Gals Only

Camping In The Cold

Among The “Coastsiders” At Pillar Point

The Blue Ridge Institute And Museum