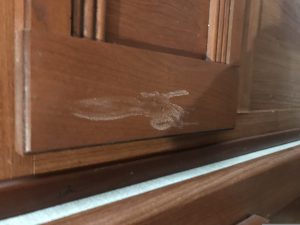 Mysterious white material appeared in a 2014 motorhome, referred to as wood sapping.

Maybe you or one of your readers can figure this out. I have a 2014 Winnebago Forza. As you can see in the pictures, white stuff started coming through the wood about four months ago. No one has a clue what is causing it. They have called it “sapping,” and according to a representative at the dealership, Valspar no longer makes this exact stain for the coach. I just got off the phone with a Winnebago representative, and they have never heard of this happening in their RVs. I am open to any suggestions. 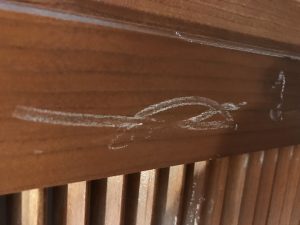 Mysterious white material appeared in a 2014 motorhome, referred to as wood sapping.

Jeffrey, your “sapping,” as they call it, shows a very distinct pattern, something I’ve not seen before. I assume you’ve tried to clean it. Valspar recommends using mineral spirits, though I’m not sure of the ramifications. I’d think that ultimately would dissolve the stain.

Are you in a very moist environment?

I have looked into such “bleeding” in wood, and the only explanation I can come up with is summarized in the following excerpt from an article found at www.paintinfo.com. I also see other references online to pre-existing tannins in the wood.

“Colored wood such as cedar and redwood, and in some cases other common softwoods, can show a condition known as ‘cedar bleed’ or ‘cedar staining.’ This can appear anytime from shortly after painting or staining to months later. As the name implies, the most commonly seen staining problems involve the various types of cedar woods. These woods are very common and have good machining properties and are found used as structural members, siding, roofing, frames and trim for both exterior and interior applications.

“Cedar is well known for its durability as an exterior wood and its resistance to insect and fungus attack. This is generally attributed to the presence of tannins and other substituted phenol compounds in the wood. Unfortunately, these are also the compounds that contribute to the cedar bleeding. These materials are partially water-soluble and become more soluble in alkaline water such as water that runs over a masonry surface onto partially or uncoated cedar trim.

“In the past, oil-based primers and paints made with a white lead pigment were used to block the appearance of cedar stains. Later, the use of latex-emulsion-type binders with white lead pigments created ‘blister-proof’ primers and finishes. The concerns for human health and environmental damage stopped, in large part, the use of these types of coatings. Newer systems are available in both solvent- and water-based types that incorporate non- or low-toxicity type stain-blocking pigments. A more recent development has been the stain-resistant water-based emulsion-type polymers that do not require special pigments.

“The difficulty has been to develop primers that will work under all application and exposure conditions. Wet or damp wood, low film build, contact with masonry, lack of back priming, leaky siding laps and humid conditions during painting are all negative factors.”

Furthermore, many other experts say the best way to combat this bleed-through is by using shellac, but I’m not sure how that would work in your case. I believe the best solution is to give it time and see whether it manifests in other areas. If it does, I’d either refinish each section of molding or replace it with new.

Refinishing the wood sections may lead to the bleed-through reappearing unless you sand, re-stain, and shellac each piece. A lot also depends on where the wood trim was processed. I found references to recent studies noting that this bleed-through often shows up with wood processed in South America, Chile to be exact. I’m not sure where Winnebago gets their wood supply.

I’d suggest you remove one section of the stained molding and inspect the reverse side to see whether the bleeding exists on the unfinished side. If it does, the only way to negate it may be to replace the affected sections. But that’s problematic if an exact stain match cannot be found, unless you replace all the trim.

Other than the sapping, or bleed-through, scenarios discussed, you’ve got me stumped as to a plausible recommendation. I will follow up with the folks at Winnebago to see whether they’ve learned anything.

*****
Gary, mineral spirts will work, so they say, but it will take the stain off as well, and as mentioned previously, they no longer make the stain (Valspar # AXB1190). I’m not sure how to match it other than redoing the entire coach. This started about six to seven months ago. The Forza 38R was bought new in 2014. I’m not sure what kind of wood was used and Winnebago didn’t say. Both sides are stained, and the white appears only on the one side; however, it’s also on the doors and cabinets, not just the moldings. It started with one door in the half bath but now has appeared all over the coach. I would love to just sand it and re-stain it, but I cannot get the stain. Winnebago says they have not used that stain for the last three years or so. I am hoping I can take a sample in and get a match; so far, no luck. — Jeffrey

*****
Jeffrey, I just heard back from my contact at Winnebago, and he confirmed that no one at the factory has seen this situation. Your best bet may be to take a sample of the stained wood to one of the big-box stores and see whether they can match your existing finish. They should be able to blend the stain to match. If there aren’t too many white marks, as a first attempt, it may be easier to remove the stain by sanding and hope you can get deep enough for the new stain to “take.” Or try the mineral spirits and re-stain. Since some of the cabinet faces are involved, the idea of replacing the wood is problematic. Let’s hope sanding and staining will suffice.

If you end up replacing any of the sections of molding, please send me a short sample containing the white bleed-through. I can have some testing done locally to ascertain exactly what’s going on. Wish I had a better solution, but I am intrigued and would love to examine a section.

Hello Gary, the mystery is solved! Evidently it was the glue the 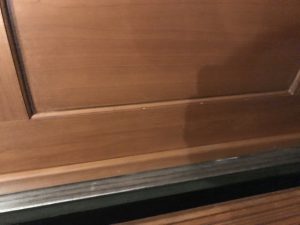 The RV owner ultimately learned that glue was the cause of the wood sapping, and he resolved the issue with white vinegar.

y used that came through the wood. After trying about everything to remove it without killing the stain, lo and behold, plain white vinegar did the job! There was no damage to the stain or the wood, so I did not have to replace anything. Thanks again! — Jeffrey

Jeffrey, congrats on finding the cause and the cure! This has to be one of the top five “most confounding issues” I’ve been asked about. I’m pleased you were able to find a solution that enabled you to avoid having to replace all the trim, doors, and cabinet faces. Your dilemma may help others who experience the same phenomenon.

Power For The People – An RV Electrical...