Anniversary rally harks back to the 1960s. 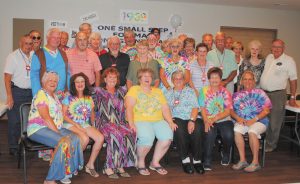 Members of the Dixie Traveliers donned tie-dye T-shirts and other apparel popular in 1969 to celebrate the chapter’s 50th anniversary.

What comes to mind when you think back to 1969? Maybe Neil Armstrong’s famous quote, “That’s one small step for man, one giant leap for mankind.” Or perhaps Jimi Hendrix, The Godfather, Vietnam, ZZ Top, Richard Nixon, and hippies.

Also that year, on July 23, the FMCA charter for Dixie Traveliers was issued. The chapter’s 50th anniversary was the focus on August 22 to 25, 2019, when 30 members and four guests gathered for a rally at Anchor Down RV Resort in Dandridge, Tennessee.

We owe thanks to a group of campers from Kings Mountain, North Carolina, and surrounding communities who met in the summer of 1968 to discuss forming an FMCA chapter. It is remarkable this club has endured.

Attendees were encouraged to wear bell bottoms and other 1960s attire for a “Fun from the ’60s” party. The room was decorated with a ’60s theme, and we listened to rock ’n’ roll hits from the past. We also enjoyed socializing and viewing pictures from 50 years of camping.

Each member family received an anniversary gift: a flag with the new club logo, to be placed outside our RVs during rallies.

Two new couples joined at the rally, followed by two additional since. The next 50 years are looking strong!

Family Matters: This Pooch Has Panache