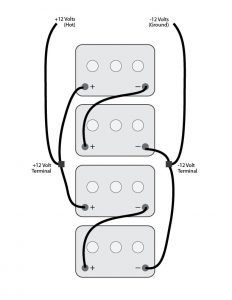 This battery bank is wired in a series/parallel configuration.

When I attended one of your seminars at an FMCA convention, you talked about equalizing the load over a multibattery bank. Battery balance, you called it. I have a 2013 Newmar Dutch Star motorhome with eight 6-volt batteries wired in series and parallel to produce 12 volts with 928 amp-hour capacity. I use those red and green felt washers under each terminal to help control corrosion. I’m concerned about the load, because a couple of terminals, over time, became so hot they melted the washers. So, I can see that the batteries are not wired for optimum balance. It’s an all-electric coach with a residential refrigerator. My questions:

1. You stress that every cable should be the same length. Does this also include the four cables wired in series between the positive of one 6-volt battery and the negative of each second 6-volt battery?

2. I envision that if I use dedicated main terminal connectors, the overall total cable length will be much longer, thus creating more resistance. Is there a maximum length that should not be exceeded?

3. I’m confused about the size of welding cable I should use to rewire all the batteries. I have an inverter and am considering the possibility of adding solar in the future.

4. Many types of cable ends are available; do you have a recommendation for which to use?

For the dedicated terminal connector, the longest run dictates the overall length of each cable. Again, make sure the positive and negative cables are the same size/length. You won’t be adding an overabundance of resistance.

My recommendation for the gauge of the welding cable for your system is 4/0 (0000). For others with a smaller bank, use the guideline that follows:

I have no real preference for the type of cable ends, but I do recommend attaching them using silver solder rather than simple crimped connectors. Also, I recommend heat-shrink tubing — the type with a sealant — to prevent moisture intrusion. Your thought of possibly adding a solar charging feature is a good one!

We have a 2018 Coachmen motorhome. The thermostat has been jumping from one setting to another, without anyone touching it. We would like to replace it with a Wi-Fi thermostat, if possible. What would you suggest?

A few Bluetooth-type RV thermostats are available, but I have not yet tested them. An interesting one produced by Dometic is described here: https://bit.ly/2SGSewv. And here is the smartphone app: https://bit.ly/2GdcqQD. Keep in mind that this thermostat is designed for a single-zone air conditioner. Let me know how it works out for you.

The 12-volt lights quit working in the 1993 motorhome I recently bought. They do not work with shore power, either, but they did work when I first picked up the coach. Now I’ve noticed the chassis battery is dead and doesn’t stay charged, either. What may be the problem?

Without taking some electrical measurements, it’s difficult to diagnose. However, it sounds as though the relay in the charging converter may be faulty. Apparently, it’s not switching between the battery and the converter when plugged into 120-volt-AC shore power. Chances are, you’ve been running off the house battery bank only, even while plugged into shore power, and the batteries eventually drained.

I’ll need more info regarding the brand and model number of the converter/charger in order to dig deeper. The engine battery typically receives a charge only when the engine is running. The alternator on the engine charges both battery banks, but with the RV plugged into shore power, only the house battery receives a charge in the vast majority of coaches built in that era.

But the first step in both instances is to have the batteries tested. It’s necessary to eliminate the batteries as the cause of the symptoms. Have them load tested using a carbon pile load tester. You’ll probably have to take them to a battery supplier in your area, since most RV repair facilities are not equipped with a sophisticated carbon pile test device. Once the batteries have been fully tested and you send me the brand and model of the converter/charger, I’ll be able to diagnose further.