Museum Dedicated To The U.S. Army Opens In Virginia

This collection honors the experience of American soldiers.

“The soldier is the Army. No army is better than its soldiers. The Soldier is also a citizen. In fact, the highest obligation and privilege of citizenship is that of bearing arms for one’s country.”
– Gen. George S. Patton Jr.

The United States Army is the oldest of the Armed Forces, founded in 1775. But now it has the newest museum: The National Museum of the United States Army. Situated at Fort Belvoir, Virginia, less than 6 miles from Gen. George Washington’s Mount Vernon, it is proud, bold, and amazing, like the Army itself. The planned June 4, 2020, opening date has been put on hold because of COVID-19-related work delays, so readers are encouraged to check the museum website for updates prior to visiting.

Step inside the museum, and its gigantic lobby will give you pause. Designed into the floor is the Army emblem, 21 feet across. Above, illuminated glass panels are set into the ceiling; each one depicts an Army campaign (190 in all). An engraved wall at one end of the lobby commemorates each of the U.S. Army’s campaigns.

The 185,000-square-foot museum was constructed with funds raised through the Army Historical Foundation, in cooperation with the U.S. Army, which provided site preparation, infrastructure, exhibits, and the interior work. The U.S. Army now owns and operates the museum, with continued fundraising and support services provided by the foundation. The museum is so large that visitors should resolve to take their tour one step at a time, just like any good soldier. Halt to consider . . . 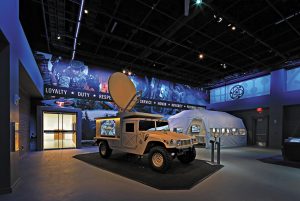 The Experiential Learning Center brings the U.S. Army story to life with a variety of displays and hands-on learning activities.

*Soldiers’ Stories: From outside the building, through the entry and lobby, and into the concourse are freestanding pylons. Each shows an etched image of an ordinary person and tells their Army story in brief. A young woman who managed a telephone switchboard during World War I; an honored member of the Indian Scouts; a woman who served in Afghanistan . . . all are tales to remember.

*A D-Day Exhibit: On June 6, 1944, Allied troops landed on the beaches of Normandy, France. The landing is re-created here, using 63 life-sized soldier figures.

*The Army Theater: The film shown here, Of Noble Deeds, looks at the past and the present in soldiers’ lives. The theater includes not just sight and sound but also other sensory elements.

*A Special Exhibit: The first rotating special display consists of a selection of artwork created by soldiers on the front lines from the Civil War through the present. Watercolors, carved wood, etchings, and more are here.

*Permanent Exhibits: The main route that visiting “troops” will follow takes them through the years, beginning with “Founding the Nation.” Visitors will learn about the Army’s primary objective of preserving the nation, and its role in world conflicts. The story is told with images, equipment, tanks, helicopters, weapons, and other arms.

Just a few of the actual military vehicles on hand include an M3 Bradley Cavalry Fighting Vehicle used in Iraq; an M4A3E2 Sherman Jumbo tank used in World War II’s Battle of the Bulge; and a Landing Craft, Vehicle, Personnel (LCVP) “Higgins Boat.” 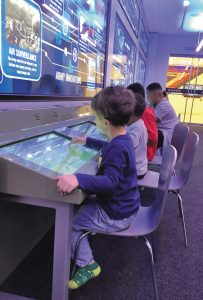 *The Medal of Honor Experience shows what the medal looked like through the years, beginning with the first one created in 1862. Among those honored at the museum are 1870 recipient Sgt. Emanuel Stance, an African- American credited with turning a band of mostly former slaves into a regimented group at Fort McKavett, Texas. Sgt. 1st Class Paul R. Smith was awarded a Medal of Honor posthumously for saving the lives of at least 100 of his fellow soldiers during an effort to capture Baghdad International Airport in 2003.

An adjacent Medal of Honor Garden overlooks the museum campus and allows space for quiet reflection.

The Experiential Learning Center is a portion of the museum dedicated to giving visitors of all ages something they can understand. Fort Discover lets children ages 8 and under try different Army tasks, such as serving food in a chow line, driving a Jeep, and climbing a radio tower.

In all, the National Museum of the U.S. Army tells a very big story, in a very big space, with large displays. But the more personal tales may be the ones you will remember the most.

Timed admission tickets are free and required to enter; a limited number of tickets will be available at the door each day. Hours are 9:00 a.m. to 5:00 p.m. daily (except Christmas). No IDs are required to enter. Parking is free. However, there are restrictions on oversized vehicles like RVs; if you must take your RV there, call and ask about getting a parking pass.

The museum is a few miles from Mount Vernon, and only 20 miles north of the National Museum of the Marine Corps in Triangle, Virginia, so travelers may wish to combine visits.

How We Stayed Along The Oregon Coast For...

Farm And City In Fargo