Explore these state park treasures — one on the Atlantic coast and the other on the Gulf Of Mexico — and the wonderful places that surround them.

Worthy of the multiple National Gold Medal awards for excellence in parks and recreation it has received, the Florida State Parks system keeps company with the best in the United States. Two of the gems within the system, located in the northern part of the state, boast island settings, but they offer different experiences.

Ocean waves ebb and flow, adding a soothing sound during a long walk along the beach southward. Extend the pleasant experience by adding a swim or spending time reading in a beach chair. Viewing the sunset over the Amelia River from the small sand beach at the state park campground marks the tranquil end of daylight hours. 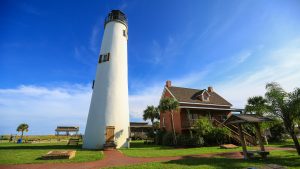 Then there is the highlight of the park, the fort itself, begun in 1847 and on the National Register of Historic Places. Although no battles were fought there and the structure never was completed, the fort saw service during the Civil War, Spanish American War, and World War II. As visitors enter the pentagonal-shaped fortress through a swing bridge, an open grassy promenade lined with brick buildings and double walls greets them. Walking around this coastal fortification — one of a number of 19th-century forts built as part of the U.S. seacoast defense system — leads to the officers’ quarters, officers’ dining room, laundry facility, enlisted men’s barracks, storehouse/dispensary, jail, and bastions. Up on the ramparts, visitors are treated to a close inspection of the cannons, as well as long views down the beach and over the Atlantic Ocean and Cumberland Sound.

On Saturday mornings, a guided walk along the Willow Pond Nature Trail at Fort Clinch allows visitors to wander around freshwater ponds and catch glimpses of gators and turtles. Behind sand dunes, coastal grasslands adjoin maritime hammocks, providing habitat for varied wildlife. Add to this the Egans Creek marsh to the west and the Atlantic beach to the east, and sightings of wading birds and shorebirds are almost guaranteed. Fort Clinch State Park is a designated stop on the Great Florida Birding and Wildlife Trail.

The first Saturday of each month offers an extra opportunity to gain insight into the life of 1860s America, when living history interpreters re-enact the time when the Army’s New York Volunteer Engineers worked on fort construction. Also on the first Saturday of the month, a unique picture of the fort emerges during a candlelight tour. How was the fort different during the 11 months when Confederate troops occupied it? Find out during the First Weekend Confederate Garrison. Union troops arrived at the fort in March 1862, and re-enactors depict this time at First Weekend Union Garrison events. Yet another difference in the fort occurred during the 1890s. Learn about it on the annual Spanish American War weekend.

Like treasure hunts? Try geocaching, the modern version of a hunt using GPS and clues to locate caches. Enter the Fort Clinch code, GC38Y93, at Geocaching.com to get started. 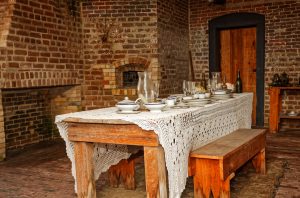 Visitors can tour Fort Clinch itself, including the officers’ dining room, outfitted like it might have been in the 1800s.

Fort Clinch, one of the state’s oldest parks, has two campgrounds; both provide RV campsites with water and electrical hookups. The Amelia River Campground offers shaded sites, while the Atlantic Beach Campground has no trees. Keep kids busy and interested by signing them up for the Junior Ranger program.

The city of Fernandina Beach is a bonus for state park visitors. Located on prime waterfront property, it is the only city in the United States over which the flags of eight countries have flown. The Isle of Eight Flags Shrimp Festival celebrates this fact each year during the first weekend in May. The historic downtown boasts attractive independent shops and restaurants, plus restored Victorians, which make it a pleasure to wander around. Use the town’s self-guided tour map or embark on a guided tour.

Stock up on fresh foods at Market Place, held each Saturday morning downtown. On the second Saturday each month, be inspired or shop for original art in various forms at the evening Artrageous Art Walk. Visitors also can check out the Arts Market, which occurs on the second and fourth Saturday mornings.

Another walking (or bicycling) option is provided by the grassy trails of Egans Creek Greenway, where benches and interpretive displays beckon. A water perspective of the area can be enjoyed via cruises on the Amelia River and to Cumberland Island National Seashore.

As one drives south on State Route A1A, the scenery morphs into a typical beach community. Thirteen miles of sand with ample public access are a treasure of Amelia Island. Is horseback riding along the beach on your bucket list? Amelia Island State Park, on the island’s southern end, is the only state park in Florida to offer it. Or perhaps you would enjoy surf fishing or spotting seabirds. 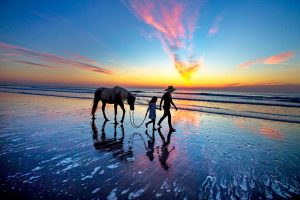 Walking the mile-long George Crady Bridge Fishing Pier State Park, part of the Talbot Islands State Parks group, brings rewards of water vistas and sightings of birds, dolphins, and manatees. Fishing here on the southern tip of Amelia Island is reportedly one of the most productive spots in northeast Florida. Access to the bridge is available through Amelia Island State Park.

Continue a bit farther south on A1A and you come to Big Talbot Island and then Little Talbot Island state parks. As you hike through a maritime forest, nature surrounds you. Weathered, bleached remains of cedar and oak trees give Boneyard Beach in Big Talbot Island State Park its name and artistic appearance. Interpretive signs along the 2.9 miles of Timucuan Trail that parallel A1A add interest while walking or biking this paved route. For a marine experience, glide silently through the salt marsh in a kayak or launch a boat.

Although water activity is now prohibited at Little Talbot Island State Park, its 5 miles of sand beaches and 3 miles of bike trails, plus a campground, attract visitors. Several thousand baby sea turtles hatch from May to October. 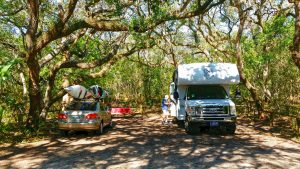 If a tour by Segway is something you have wanted to try, Fort George Island Cultural State Park can accommodate you. The tour goes slowly through a maritime forest and visits the Kingsley Plantation. The park’s visitors center now occupies the once-exclusive Ribault Club resort, which has been restored. Launch a kayak or a small boat behind the club for a water tour, or bike the 4.4-mile-loop Saturiwa Trail. An unusual hike leads through a former golf course now being allowed to return to its natural condition. In a flat state such as Florida, a 65-foot sand dune here was given the inflated moniker Mount Cornelia.

Amelia Island is alluring and full of life, both natural and manmade.

About 280 miles away, on the eastern panhandle’s “Forgotten Coast,” you can drive across the 4-mile bridge to Dr. Julian G. Bruce St. George Island State Park and put yourself on island time for a relaxing vacation. Spend your days along 9 miles of undeveloped sugar-sand beach, share the natural environment with shore birds, watch for dolphins, fish in the Gulf of Mexico or Apalachicola Bay, kayak or boat for miles, and hike trails through forest and scrub. When the sun slips behind the horizon, darkening the sky, be awed by the glow of a zillion twinkling stars. 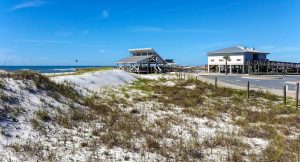 Seagulls swoop and soar over boats of every size and description that slide through the far-reaching waters. Modern shelters with picnic facilities and bathrooms lend creature comforts to nature. A fine campground with decent-size sites makes for a pleasant stay.

The park occupies the eastern end of St. George, a skinny, 22-mile-long barrier island. It is part of the Great Florida Birding and Wildlife Trail. New houses, constructed on very high pilings, are mushrooming on the developed half where shops and restaurants abound. View the interiors of some of these homes on a tour each winter. Like chili? Visit in March for the St. George Island Regional Charity Chili Cook-Off. Summer brings loggerhead sea turtles digging holes and laying eggs in the sand.

After the Cape St. George Light collapsed into the Gulf of Mexico in 2005, an association was formed to salvage parts of the structure, and an exact replica was rebuilt and opened in 2008 at its present location. About halfway up the 92 spiral steps you may conclude you will never make it, but endless views at the top reward your effort. Browse the museum and gift shop in the keeper’s house.

Local shops, restaurants, and galleries lure visitors to the nearby town of Apalachicola, a fun word to say and an enjoyable place to visit. With the help of a map from the visitors center, walk the streets to view the historic structures and gain a feel for life in this fishing village and former cotton shipping town.

Worked up an appetite? Treat yourself to a fresh, tasty seafood meal. Oysters are the king crop, followed by shrimp. On the second and fourth Saturday mornings each month, locals and visitors stock up on seafood recently plucked from the water, as well as produce, honey, and homemade goods at the Apalachicola Farmers Market. Winter months bring live performances by professional actors and musicians at the historic Dixie Theatre. 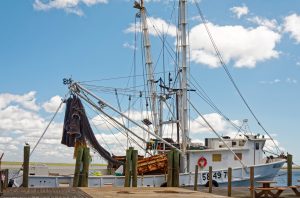 Shrimp boats are common sights along the Apalachicola River in the Florida Panhandle, and nearby markets sell fresh seafood.

What manner of furnishings did 19th century residents here have in their homes? Visit three house museums for a glimpse: Orman, Chapman and Raney.

Boat tours offered by the Apalachicola Maritime Museum and other cruise companies get people out on the water, of which there is a lot. At several companies you can book spots on fishing charters.

As you glide gently along the Apalachicola River Paddling Trail System, wilderness surrounds you. Choose from 11 trails on almost 100 miles of waterway. Hurricane Michael devastated the region in October 2018, but after consistent efforts it is welcoming visitors again.

To enhance your explorations, consider the Florida State Parks “Deluxe Real Florida Passport,” a 216-page notebook chock-full of information, a map, places to collect a stamp from parks visited, and pages to write notes. The passport costs $17.99 and is available online (out of stock at press time) or at some state parks. You may want to set a goal of visiting all 175 state
parks in Florida! The island gems in northern Florida make great places to start.