Food As A Destination

The RV lifestyle is an ideal way to experience culinary travel and its trendy cousin, gastro-tourism.

One of our more memorable on-the-road food experiences was sharing an Easter Sunday meal with an extended family in a Louisiana RV park. This was an annual event for them. In addition to hundreds of live crawfish, they filled pots of boiling water with potatoes, corn, carrots, onions, mushrooms, garlic, and hot dogs. When ready, the drained mixture was piled high onto a plastic tablecloth atop a picnic table. Fortunately for us, we happened to be in the adjoining site.

South Florida is known for its delicious Cuban sandwiches.

RVers have been culinary travelers for years. Foodie destinations are everywhere. Many of us have enjoyed barbecue in Memphis, freshly caught salmon in Alaska, lobster in Maine, Cuban sandwiches in South Florida, Philly cheesesteak in Philadelphia, beef on weck in Buffalo, the Kentucky hot brown in Louisville, and those famous beignets in New Orleans.

Culinary travel can be as spontaneous as driving into an area and asking everyone you meet about the local food specialty, or joining a family’s crawfish boil in a Louisiana RV park.

Gastro-tourism usually requires a little planning. Participants don aprons and pass through the swinging doors of restaurants to work with chefs in their kitchens, or roll up their sleeves to harvest produce from fields and oceans. The overwhelming exposure to culinary shows on television and the internet has elevated food beyond the dinner plate. Popular social media hashtags such as #foodart and #foodporn are launched into cyberspace to describe events. 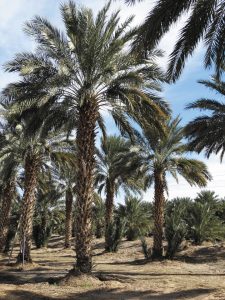 Nearly 90 percent of leafy vegetables produced in the United States in the winter months are grown in and around Yuma. Laser-leveled fields of the Colorado River Valley generate millions of pounds of bagged lettuce and salad mix every day.

In January and February, the Yuma Visitors Bureau celebrates the area’s fresh-from-the-fields bounty with Field to Feast tours. After a quick course in safe food handling, you get to kneel in the soil and wield a machete-like lettuce knife to harvest broccoli, cauliflower, and other fresh vegetables for your lunch. While your meal is being prepared, a local grower takes you through the fields to see crops, machinery, and workers in action.

At Martha’s Gardens, a Medjool date farm, you can stand beneath lush palms and learn the process of taking these magnificent Moroccan dates – originally reserved for royalty because of their texture and flavor – from the trees to kitchen tables. A thick, creamy date shake afterward will cool you down.

La Fonda Restaurant & Tortilla Factory, with influences from Senora, the northern state of Mexico, is known for homemade tortillas and tamales. After enjoying their hearty tortilla soup, served with tortilla strips, avocado, cheese, and sour cream, you can tour the tortilla-making process in the back.

Kay Maghan, public relations manager at Gulf Shores & Orange Beach Tourism, describes the Gulf Coast lifestyle very well when she says, “In the South, food truly is the core of our culture. We love to feed people.” 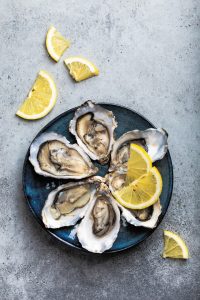 Oysters are among the tasty foods celebrated at annual cook-offs and various eateries in Gulf Shores and Orange Beach, Alabama.

The National Shrimp Festival on the beach in October offers up the crustaceans in every form imaginable. At the Hangout Oyster Cook-Off in November, more than 100,000 oysters are shucked in a day. In September 2021, at the Sweetest Chef Competition, you can watch the action live, rather than on the cooking channels, and you get to taste the desserts.

At Murder Point Oysters, the story behind the name is as fascinating as the process that produces the unique buttery-tasting mollusks. On the tour, you can follow the growth of these saltwater delicacies from miniscule spawn to harvested culinary gems, and hear how a feud between two rivals in 1929 instigated the company’s tagline, “Oysters worth killing for.”

The Gulf Shores-based NUISANCE group is a movement to put underutilized, invasive, and often discarded fish such as sheepshead and hog snapper into the kitchens of creative restaurant chefs and home cooks. If you watch for special events,
you can get involved in the catch or chat with a chef who is working to make a difference.

New Orleans is the place to explore rustic Cajun and cosmopolitan Creole cooking, from backyard crawfish boils and spicy boudin sausages to rich gumbos, étouffées, and beignets. At the New Orleans School of Cooking you can work with southern ingredients such as sassafras and learn the secrets of shrimp creole, jambalaya, and pralines. Instructors encourage you to be inventive, to learn the traditional methods of creating a dish and then add more of your favorite flavors to make it even better.

Websites such as www.neworleans.com provide food and walking tours with tastings and demonstrations. If you like to venture out on your own, almost every restaurant, bar, and household in the New Orleans area has their version of gumbo.

The Oak Street Po-Boy Festival in November showcases more than 50 variations of the distinctive po-boy sandwich. On Labor Day weekend, Louisiana Seafood Festival participants provide every type of seafood cooked in limitless ways. Celebrity chefs show off their skills. The National Fried Chicken Festival in September showcases that “other” Southern dish. During Mardi Gras, the festival of festivals that runs prior to Lent, you can become a king cake connoisseur by visiting competitive bakeries and sampling their versions of the purple-, green-, and gold-emblazoned cakes. 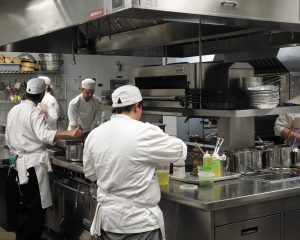 Stratford, Ontario, is known worldwide for its Stratford Festival, originally a Shakespearean festival that has evolved into North America’s largest classical repertory theater company. The city, about a two-hour drive west of downtown Toronto, has also become a culinary destination. “Our passion for food runs deep and high standards are the norm,” says Cathy Rehberg of the Stratford Tourism Alliance.

Many restaurants in the city are owned by graduates of The Stratford Chefs School, where in addition to the professional instruction program, you can take hands-on cooking classes and attend student chef dinners inspired by chefs from around the world. If you join Stratford author Peter Blush and his dogs on a Puck’s Plenty Foraging Tour, you get to lace up your boots, walk along woodland trails, and learn to identify wild edibles such as leeks, marsh marigold, fiddleheads, and nettles.

San Benito County is set in a small agricultural valley east of Monterey, near the bustle of Silicon Valley. 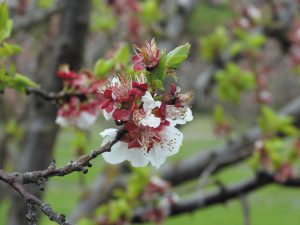 The endangered Blenheim apricot has been grown and preserved by generations of the Rossi family at B&R Farms in Hollister, California.

At B&R Farms in Hollister, you can join the third and fourth generations of apricot farmers who work hard to protect the vanishing Blenheim apricot. Walk through the process that brings this delicacy with the tart skin and sugary-sweet flesh to supermarket shelves.

At the San Juan Bakery in nearby San Juan Bautista, after tasting bread made with a sourdough starter that dates back to the 1820s, you can watch the baker fire up a blowtorch to build the temperatures in the 1938 brick oven for the next day’s early-morning baking. Indulge in the handcrafted pastries and bread and you’ll discover that, like snowflakes, every piece is unique. 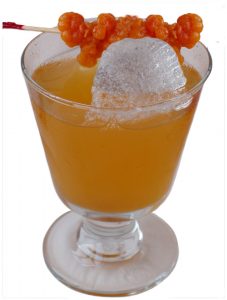 The province of Newfoundland and Labrador, off the east coast of Canada, is the place to go if you are intrigued by food dishes with names you’ve never heard of, among them figgy duff, fish and brewis, Jiggs dinner, toutons, and scrunchins. Islanders are hospitable, and the best food experiences are often at a kitchen table. You can sit back and sip a drink with bergy bits, 10,000-year-old iceberg fragments, in your glass, or stoop down to the northern tundra in mid-August to pick bakeapples, a precious fruit, because there is only one berry produced per plant. At the Norstead Viking Village, near the L’anse aux Meadows UNESCO World Heritage Site, learn how to dry fish in the open air.

We could write a book about all the different styles, sauces, and sides you can find along the numerous barbecue trails in the United States. The RV lifestyle suits the challenge to try them all. As RVers, we know the culinary journey is always part of the fun.

Northern Alabama-style barbecue is famous for its white sauce. You are likely to get some awesome burnt ends in Kansas City. In Memphis, Tennessee, the ribs are normally dry-rubbed and eaten without sauce, unless you request them wet. Pulled pork is popular in North Carolina, and the type of sauce, vinegar- or tomato-based, depends on whether you are in the northeastern or western part of the state. Texas-style barbecue is usually beef brisket served with white bread, sliced onions, and dill pickles. Missouri is the place to go for pork steaks, and the hallmark of Oklahoma barbecue is smoked bologna.

Oysters are among the tasty foods celebrated at annual cook-offs and various eateries in Gulf Shores and Orange Beach, Alabama.

At the World Food Championships (WFC), held annually at different venues around the United States, you can be a spectator, a competitor, or even a judge. It is a five-day outdoor cooking competition that brings top chefs and home cooks from around the world to battle it out for the opportunity to compete for the WFC title and win $100,000. The 2021 tournament will be in Dallas, Texas, from November 5 to 9. Learn more at https://worldfoodchampionships.com.

If you like the idea of staying overnight at a winery, brewery, distillery, or farm, Harvesthosts.com, for a membership fee, offers RVers a network of locations. You can wander a lavender farm, learn to make soap, touch an alpaca, or investigate the milk-producing process on a dairy farm.

When you research your own culinary journey, you’ll see how gastro-tourism enables established travel destinations to express their character in a new and interesting way. It also draws attention to areas that may have gone unnoticed.

Before visiting the destinations, attractions, and events described in this article, contact them to confirm dates and hours of operation, which may have changed because of the COVID-19 outbreak. Or, check the tourism sites below:

Cooking On The Go: Frozen Assets

A Smart Way To Buy An RV

How To Sell Your RV