Education Of A Lifetime

First comes schoolwork. Then the Pienings set out to enjoy some firsthand educational experiences.

What happens when a family of five shifts their work and school routines and goes mobile.

Dan and Jaime Piening, F515009, were living every parent’s dream. They dropped off their three children with Jaime’s sister and spent a long weekend in Michigan celebrating their anniversary. Alone. It was relaxing and incredibly quiet. Then, for the next four hours as they drove back to their home outside of Cincinnati, they had the chance to cap it off with another rare event: They got to talk. Uninterrupted. About whatever they wanted. 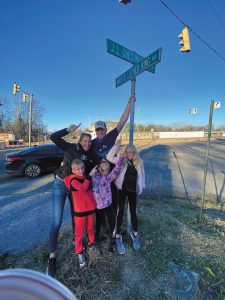 The Pienings were in Selma, Alabama, on Martin Luther King Day.

As the miles rolled by, the conversation eventually turned to what was awaiting them upon their return. Dan had just been told that because of the pandemic, he would be working remotely for the foreseeable future. And the school needed to know by Sunday whether they were going to have their kids return to the classroom or continue online learning for the next year.

“You know, our neighbors have that off-road camper,” Dan said. “They took their kids out in that for a while. They called it their school on wheels. I have this crazy idea. What if we did what they did but on a full-time basis?”

“Are we seriously considering doing this?” Jaime asked.

Then, on a small state route outside of Richmond, Indiana, they passed an RV dealership. It was, they determined, a sign.

“I called my sister and asked if it was okay if we were late by a couple hours,” Jaime said. “We stopped and talked to a sales guy. We had no context for any of this. I didn’t even know what a fifth-wheel was. We learned a lot in that quick little visit. We came home and talked to the kids. We threw the idea out that night, and pulled the trigger the next day.”

They told the school they were going virtual, and they went back to the Richmond dealership and bought a 37-foot Coleman Lantern 337BH travel trailer. They sold their three cars and bought a Ford F-250 pickup truck to tow the camper. They rented out their house, held a massive yard sale, got rid of a lot of stuff they weren’t going to need, and bought a lot of stuff that they were going to need. Within eight weeks, they were hopscotching the country in what has become a pandemically induced adventure of a lifetime.

To date, the journey has taken them through 17 states. When we spoke, they were set up at a campground in Morgan City, Louisiana, a tiny town about 85 miles southwest of New Orleans. A rare cold spell had pushed the family inside, proving the coziness of a 37-foot trailer to a family of five and a spirited yellow Lab. A fireplace flickered behind Jaime and Dan as they sat together at the dinette and reflected on the decision to go remote, and the impact it’s had on them and their kids, 10-year-old Elle, 8-year-old Danny, and 7-year-old Cami.

“I have a job that I’m able to do remotely,” Dan said. “The kids’ school was virtual, and they weren’t into things like gymnastics or basketball or whatever at the time. It was also the perfect age for our kids. They’re young enough that they don’t mind sharing the space.”

In an era when kids are forever occupied in front of a computer screen, or are so busy with sports and other activities that family life often gets lost, the awareness of the quality of the time they are spending together and adventures they are experiencing — despite the limitations of the pandemic — aren’t lost on anyone, even the kids. Well, mostly. 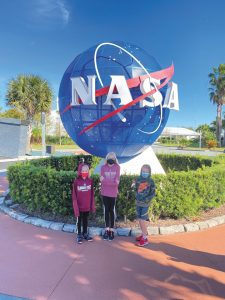 The family’s odyssey included a stop at the Kennedy Space Center in Florida.

“I think they started with a great appreciation of it,” Dan said. “Now we’re six months into it, and they’re starting to get accustomed to it. We have to remind them, ‘Hey, do you guys realize that if we were back home you would be waiting for the bus in zero-degree weather right now?’ Or, ‘You realize that back home you’d still be at school, but instead you’re at this museum?’ We take time to point that out intentionally. I think when they get older, they’ll truly appreciate all they’ve seen and done. Their bucket list is pretty well checked so far.”

“We don’t want to raise entitled kids,” Jaime added, “so we try to tell them, ‘You will probably never in your life be in the Florida Keys for three weeks over Christmas, so soak this in.’ Hopefully, they’ll look back one day and have the appreciation that we have for what we are doing.”

As Jaime answered a question, Dan jumped up and walked over to where the kids were sitting. They were trying to play an online video game and were wreaking havoc on the Wi-Fi connection. He had to be the bearer of bad news, telling them they’re using too much data and they need to shut it down.

While the adventure is piling up both miles and memories, it’s also giving Jaime and Dan something else they didn’t have before — experience in the RV life. With zero knowledge in owning or operating an RV, they started on a steep learning curve that six months later they are still climbing. They recorded the walk-around at the dealership and binge-watched YouTube videos from RVers who share their how-to knowledge. Still, some things only come with experience, such as, well, how to deal with Wi-Fi issues while on the road.

“Yeah, the Wi-Fi situation has been a challenge,” Dan said. “What we ended up doing was buying a hot spot with Verizon and AT&T with max data, and then a T-mobile SIM card that went into the Winegard ConnecT 2.0 that came with the camper. What we quickly found out was that despite the many gigabytes of data, the kids can’t play a bunch of games online or we can’t do a lot of FaceTime, unless we get some free data from the campsite.

“We do our best to get on a network, and if not, we go to our hot spot backup system,” he added. “We really try to cut down on the amount of data that we use, but we will go through 80 gigs of data between the kids’ school and my work. Then we’re like, ‘It’s time to read books or watch DVDs tonight.’ When we tell our kids they can use all of the data they want, they actually cheer. ‘Yay!’” 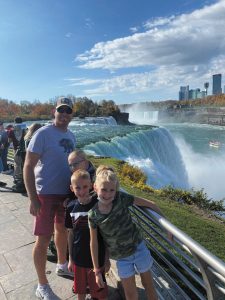 Wi-Fi is such a challenge that it’s one of the first questions the Pienings ask campground managers when they pull in, and they make a weekly plan each Sunday night to assure they’re able to stay connected through the week. But it’s also vital to successfully live their adventure. Each child has to connect to their classrooms. As a business solutions consultant who deals with a lot of IT projects, Dan spends most of his day online.

“If campsites want customers like us, they would invest in their IT infrastructure,” Dan said. “That would be a segment of business that would be huge for them to advertise in.”

Still, the challenge is worth it. Working at a picnic table next to a lake on a warm, sunny day is better than any office. And having the kids share with their classmates where they are and what they’ve seen is priceless.

“Dan typically gets up and starts working, and I will get the kids breakfast, and then we’ll go outside so they can do their virtual learning,” Jaime said. “They’re usually done by noon, so we’ll head out to a museum or something for the afternoon. Poor Dan misses out on all the fun.”

They typically pack up and move to a new campsite each Sunday, leaving Saturdays open to explore wherever their journey leads them. They’ve hit historical battlefields and cultural landmarks. They’ve been to Kennedy Space Center and were in Selma, Alabama, on Martin Luther King Day. They’ve visited Niagara Falls to the north and Key West to the south. At this writing, they were pointed west and heading toward Texas with an eye on eventually getting to the Grand Canyon. But what happens in between and when it ends, no one knows.

The only thing they know for sure is they will be back in Cincinnati in July, when they will have to make a decision about school attendance for next year. With the COVID-19 vaccine being administered, the kids may not have a virtual option anymore, and Dan may have to go back to traveling for business instead of working remotely.

Until then, they’re making the most of the opportunity the pandemic has given them, seeing the country and giving their kids a firsthand education of a lifetime. 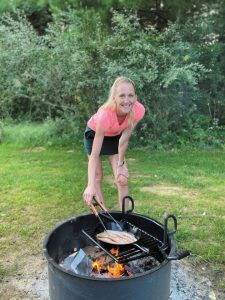 On the road, even day-to-day activities are a little more special.

“The hard part is, we can’t get to every state and see everything we want to see,” Jaime said. “There’s just not enough time. We’d need at least two years to do that. That’s what is so beautiful about this: You never run out of options. We’ve talked with other families who have sold their house, are doing this full-time, and don’t have an end in sight. Where we’ve left it is, we are going to go back in July and re-evaluate.”

As we talked, Danny and Cami circled around and popped up behind Dan and Jaime. Their hair still showed the remnants of a color-your-hair-with-chalk activity that took place a day earlier. Since their online gaming had to stop, they had decided it was time for dinner. Parental duty calling. Even on the road, some things don’t change. Still, said Jaime, even the mundane is special.

“We’re making memories for our kids,” she said.

That, too, is every parent’s dream.

Induction Cooking In An RV

Two For The Show

The Art Of Fly-Fishing