Eddie and Joyce Hightower get to wheel around in a new Winnebago Solis after winning a contest on “Wheel of Fortune.”

Eddie and Joyce Hightower of Tumbling Shoals, Arkansas, are self-proclaimed RV enthusiasts. In the 55 years they’ve been married, they’ve owned three motorhomes and even donated their last one to charity. But their camping days are not over. The couple won a Winnebago Solis 59P while watching the TV game show “Wheel of Fortune” over the summer.

The Solis 59P is a 19-foot-9-inch Type B motorhome built on a Ram ProMaster chassis. It has a pop-up top, wet bath, sink, stove, refrigerator, and solar panels. It sleeps four and has a starting price of $112,133.

“We plan to spend time enjoying the many campgrounds in our local area,” Joyce said. “Since the Solis is easy to handle, we may also visit family in other parts of the country. For now, though, we are just enjoying the prospect of having a comfort-able home away from home where we can be together and experience the outdoors.”

Winnebago has been partnering with “Wheel of Fortune” for more than 20 years, and even created the show’s promotional vehicle, the “Wheelmobile.” The Solis 59P was the grand prize in the “Wheel’s Win a Winnebago Giveaway” during the show’s National Parks theme week. To enter, viewers had to submit the bonus round solution to the show’s website. Nearly 1 million people entered for a chance to win the Winnebago.

The boom in the RV market has not only had a positive impact on manufacturers but on financing companies as well. Trident Funding announced in August that it is on its way to a third straight record-setting year, and it is hiring a team that will be devoted exclusively to financing RV sales. James Barron was named director of the RV team.

Trident is celebrating its 25th anniversary in 2021. To date the privately held company has provided nearly 40,000 loans ranging from $20,000 to $20 million. In addition to the RV industry, Trident also provides financing to the marine and aircraft industries.

Lippert Components, a supplier of a broad array of highly engineered components for the RV industry, announced in August that it acquired Furrion Holdings, a major manufacturer of appliances, appliance accessories, and audiovisual products such as observation cameras. The acquisition was brought on by a prior partnership between the two businesses in which Lippert sold Furrion products to RV manufacturers and aftermarket customers throughout the United States and Canada, said Jason Lippert, president and CEO of Lippert.

Furrion’s product catalog complements that of Lippert’s, allowing Lippert to offer an even more widespread range of products to the industry, according to a press release. Lippert plans to use its existing relationships to expand Furrion’s distribution channels, as well as to inject more resources into Furrion’s research, development, and innovation.

Approximately 80 percent of Airxcel’s $680 million in annual revenue was generated through the sales of original equipment to manufacturers, with the remaining 20 percent from the sale of aftermarket products. Of that 80 percent, roughly 30 percent came from sales to Thor subsidiaries. While the sale bolsters Thor’s ability to secure equipment in a market that is dominated by supply chain and other shortages, Thor said in a statement that it would increase investment in Airxcel’s manufacturing capabilities so it could become an even more reliable supply partner to the entire RV industry. 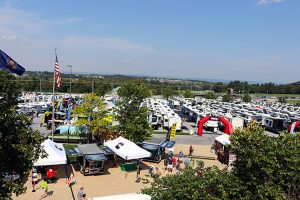 People are eager to move beyond the COVID-19 confinement that has kept everyone separated for the past 18 months. That was evident in Hershey, Pennsylvania, in mid-September during America’s Largest RV Show, presented by the Pennsylvania Recreation Vehicle and Camping Association (PRVCA). Despite some precautions still being advised, the five-day event drew 61,320 people, the second-largest attendance in the show’s 52-year history. It was eclipsed only by the 2017 attendance of 64,154. And, despite the backlog and supply chain challenges that manufacturers continue to face, more than 30 manufacturers exhibited 1,200-plus RVs at the show. The show also featured more than 150 vendors, as well as hourly educational sessions.

Give Yourself A Brake