The economy may be twisting and turning, but this Oregon company remains on track, producing its stunning luxury bus conversions.

Let’s say you’re looking for a motorhome with a gold-plated sink, or perhaps one with a jetted hot tub and heated towel bars. Maybe you want one with a built-in crib and playpen, or a treadmill, or an actual basement area belowdecks where you can have a small room for your teenager or your cats. With the economy in slow motion and the RV manufacturing industry taking a hit, you might think that this type of opulence would be found only in the dreams of America’s RVing public. But you’d have to think again, because the luxury RV dream is a continuing reality, thanks to companies such as Marathon Coach, the world’s largest luxury bus converter and dealer. (And, yes, they have built coaches with all of the above features.)

Since 1983, Marathon has been manufacturing some of the most lavish, top-dollar bus conversions in the world, and while the recent economic beating has affected the company as well, it is weathering the storm better than some.

“Nobody is recession-proof,” said Marathon president Steve Schoellhorn. “Our customers tend to not be affected by little ups and downs in the economy, but this has been deep enough that it has even affected them.”

Mr. Schoellhorn attributes the company’s survival to the lower-volume, specialized nature of the custom bus-conversion niche. “Fortunately, with our business model, we don’t need to sell that many coaches to have some success, whereas the bigger companies need to have volume, volume, volume,” he said.

In fact, Marathon coaches don’t get names but are given individual numbers instead. They are now a hundred or so above 1,000, producing between 40 and 60 coaches per year in recent years. This might not seem like enough to keep a company in business until you stop to consider that Marathon coaches run between $1.5 and $2.5 million each. One recent coach, #1167, is described as a Manhattan penthouse with quadruple slideouts. While quad slides are not new to Type A production motorhomes, Marathon is said to be the leading producer of Prevost H3 quad-slide coaches and the only producer of quad-slide Prevost XL models in the industry.

Marathon coach #1 was produced long before the days of quad slides, in September 1983 in the Eugene, Oregon, area. In 1990 current owner Bob Schoellhorn bought his first Marathon and invested in the company. In 1994 he became sole owner, and the company moved into a custom-built manufacturing facility in Coburg, Oregon, where it still resides today. The Marathon Coach Florida sales and service complex near Tampa was opened that same year. Marathon Coach Texas opened in Grand Prairie, near Dallas/Fort Worth, in 2001; and most recently, Marathon Coach California, in Beaumont, opened for business in 2007.

The company is proud of its employees, which has made adjusting the staffing levels to match the company’s lower production rate that much more difficult. Before last year’s brutal economic toll, Marathon’s Coburg plant employed slightly more than 300, but the facility currently employs around 200. “We are increasing production this fall, which will require adding additional craftspeople,” Steve Schoellhorn said. 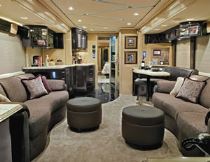 A leaner company certainly doesn’t mean fewer features in Marathon coaches, however. On my recent tour through the Oregon plant, Mr. Sutton pointed out that Marathon’s commitment to quality is paramount. “We have a very, very strict quality control system, and we don’t release a coach until it’s right,” he said.

Each Marathon coach takes 16 weeks to build and requires 5,000 to 10,000 hours of labor, depending on the complexity of the particular unit. From the initial order, a custom-built coach typically takes approximately six to nine months to complete. Mr. Sutton points to the Prevost chassis and framing as evidence of superior quality and durability: the entire frame of a Marathon coach is stainless steel.

“These Prevost chassis are designed as passenger line buses, so they’re designed to go 1.5 million miles,” he said. “Marathon complements the chassis with superior handcrafted interiors and systems built to last, evidenced by the many older Marathon coaches still operating on the road today.”

In addition to quad-slide floor plans, some of the latest and greatest features at Marathon include different paint designs, including the company’s “echo” series, which incorporates a unique paint scheme on opposing sides of the coach; the Crestron remote-control system; interior air locks on doors and appliances; the air-activated, automated sewer hose system; and the amazing, patented TechLink electrical system.

The Crestron system allows owners to use just one remote to control most of the systems on the coach, including audio-visual systems, automatic window blinds, air-conditioning, and lighting fixtures.

Marathon calls its patented TechLink system the motor coach industry’s first true intelligent electrical system. It is one of the most impressive examples of the company’s in-house patents. The computerized “brain” of the system enables owners to control the coach’s electrical-based systems from any of the fixed, wired, or remote controls throughout the coach. TechLink tracks essential coach information and displays it on the dash monitor, a bay monitor, or the coach’s television monitors, allowing owners to learn the status of the batteries, fluid levels, and temperatures throughout the coach.

“I think the most impressive part of the system is the remote diagnostic capability,” Mr. Sutton said. “If there is an issue, the TechLink system can be hooked up to a telephone line. So, if the client doesn’t know what’s going on, they can just plug in their telephone line and our tech guy calls up and remotely troubleshoots the problem.”

While a lot of thought and engineering goes into the traditional luxury and high-tech components at Marathon, the company is also making strides to become more resource-efficient and environmentally sensitive.

“I think there are going to be lots of innovations in regard to going green,” Mr. Schoellhorn said. “There are new emissions laws that are going to kick in next year, which will reduce about 70 percent of the particulate matter in the air. That creates challenges for the engine manufacturers, but overall it’s good for the environment. I think that a lot of innovation in the future will happen. I’m sure we’ll see fuel cells and those types of things, but, unfortunately, it doesn’t happen overnight.”

When it comes to surviving and thriving in the future, Mr. Schoellhorn predicts that the strategy of cutting back and staying the course will work. “I don’t think it will be so much scaling back on the size of RVs,” he said. “There will always be a demand for that, and a lot of companies are working on greener RVs. But even now, an RV will get gas mileage close to what a Chevy Suburban does, and you have your entire life with you. But I think there will still be a lot of demand for the high-end luxury RVs, the 45-footers. It will clearly be a lower number over the next few years, as it was at the peak of the demand. It will take a few years.”

One thing is certain. As the world economy presents more unpredictable challenges in the months and years ahead, Marathon plans to stay the course, producing their ultimate dreams on wheels for the discerning RVer.

Coaches For The Coach