A 2008 Chevy Silverado front end, slightly modified, was grafted onto the GMC.

As Josh Gifford discussed the restoration of Bob and Janet Prince’s 1977 GMC motorhome, he couldn’t help but gush every so often. He described it as “an awesome opportunity,” “a dream job,” and “a ton of fun.”

“I was just in my glory,” he said. Yes, the project was that special.

Gifford is the president of Grove City, Ohio-based Creative Mobile Interiors (CMI), a 17-year-old company that designs and constructs custom conversions involving vehicles of all shapes and sizes, including RVs. CMI not only retrofits existing motorhomes, it builds them from the ground up, starting with an empty shell.
Gifford is also the designer who oversaw the full interior and exterior conversion of the Princes’ GMC, a project that took more than two years. It was the first time CMI had worked on such a motorhome.
Gifford and the Princes, who live in Louisville, Tennessee, had been acquainted for several years. The couple often told Gifford that one day they would bring him a project. And sure enough, just before Thanksgiving 2013, the Princes called and said, “Guess what’s headed your way?” 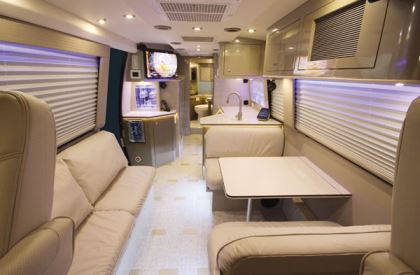 By the time Gifford saw the project vehicle, it had already visited Sandusky, Michigan-based Cinnabar Engineering for a restoration of the chassis components: engine, drivetrain, and all mechanicals. CMI’s task was to start there and build the vehicle back up.
As Janet Prince noted in the accompanying article, she and her husband wanted the finished product to be modern and state-of-the-art. They stipulated only a couple of must-haves: a full-size washer and dryer, and a small bathtub.
Other than that, Gifford was given free rein to be creative. He discussed several floor plans with the couple. They selected one, and Gifford fine-tuned it. 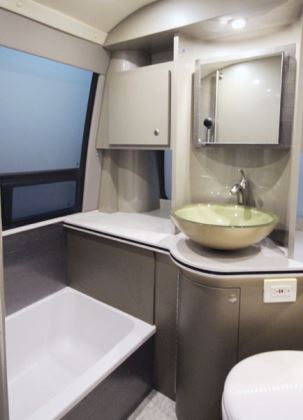 Because the washer and dryer are such large items, they became Gifford’s starting point. Using computer-aided design software to find a suitable spot, he decided to locate the appliances above the rear wheels in the space originally occupied by the shower. “Everything evolved around that,” he said.
“It was very challenging, taking 45 feet (the size of the Princes’ previous motorhome, a Prevost) and scrunching it down to 26 feet (the size of the GMC),” Gifford said. “The customer drives the decisions on the give-and-take part.”
Although the motorhome was not big enough for a bedroom, the Princes approved having a dual-function dinette. The table flips up and locks against the wall, and then the dinette cushions can be rearranged to make a comfy bed.
And, yes, the bathtub — also known as the “puddle” — is small, but “it is a bathtub,” Gifford said.
Typically, a luxury coach might have three or more TVs. The Princes’ GMC has one “because that’s all they needed.” The coach also has heated floors.
One of Gifford’s favorite parts is the dashboard. “A typical GMC (factory dash) is very boxy, very ’70s,” with fake wood, he said. “(Janet) wanted modern — swoops and curves.” 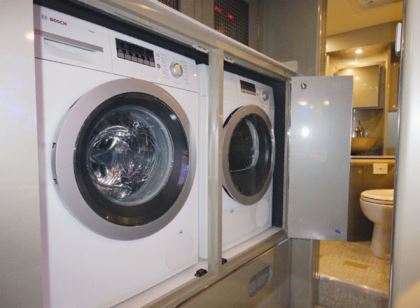 With the only requirement being to include the dash’s gauges and switches, “I loved being able to create a more modern, flowing feel up there,” Gifford said. “We were able to fabricate curves, accents, and clusters that work nicely for the controls, all while looking nice and sleek.”
Another highlight of the interior is the high-gloss finish. “Nowadays you see wood tones everywhere, but again, they wanted something totally different and modern,” Gifford said. And so the laminate surfaces “look like a painter did it, like the body of a car.”
Additional creative flourishes are evident on the exterior. The original taillights were the not-so-pretty type found on 1970s-era GMC trucks. Gifford removed those and replaced them with Cadillac taillights. “I’ve always loved those,” he said.
As for the front end, “I saw that the headlights of the 2008 Chevy Silverado seemed to match the (GMC’s) body lines,” Gifford said. So, he cut out the original front end, widened a Silverado front end by 8 inches, and grafted it in.
Other features include custom front and rear fairings that tie into new Girard awnings, and handmade custom end caps.
Plenty of back-and-forth discussion preceded the final decision on a paint scheme. The Princes had settled on tan as the primary color, but then reversed course and chose all black, with some graphics. The metallic black “looks like you can dive into it when (the motorhome) is all shined up,” Gifford said.
On the company website, CMI boasts: “This is the newest, and nicest, old vehicle you’ll ever find.” And the motorhome owners also receive plenty of praise from Gifford.
“I don’t know if I’ll ever have customers like them again,” he said, grateful for the creative freedom they afforded him. “We made a great team.”
Creative Mobile Interiors, (614) 539-4600; www.creativemobileinteriors.com
previous post

From Tragedy To Triumph

Spaceport America: The Next Step In Travel