Rich and Sherry Hashagen don’t often travel in their Winnebago Cambria motorhome during the warm-weather months, because they are busy running Camp Brim Shire.

Rich and Sherry Hashagen, F227391, love to travel in their Type C motorhome, a 2015 Winnebago Cambria. Sherry, 74, does almost all the driving, while Rich, 76, navigates, shoots photos, or naps.

“She’s an excellent driver,” Rich said. “She’s taken us all over the country — Oregon, Washington, California, Texas, Florida.” Sherry especially enjoyed getting behind the wheel of their previous coach, a Type A Winnebago Sunrise. “I like the b-i-i-i-g windows,” she said.

But as much as they enjoy traveling, the Hashagens rarely get to use their motorhome from the beginning of April to the end of September. They’re too busy welcoming thousands of guests to Camp Brim Shire (www.campbrimshire.org), which they founded in Missouri 38 years ago to serve children with special needs.

The idea for the camp sprouted in 1979, when the Hashagens, who lived near St. Louis, overheard a discussion in a restaurant about federal cuts to programs for children with special needs. “We decided we wanted to do something about it,” Rich said. 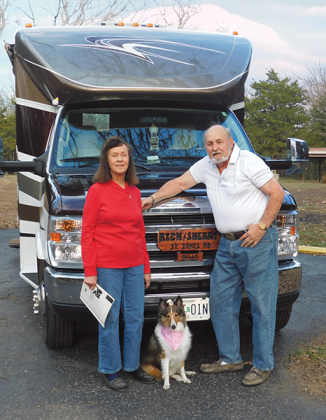 He and Sherry had no experience working with children with disabilities, but the couple had long been in love with the outdoors. They began visiting camps for kids with special needs and were disheartened to learn that most places charged each camper several hundred dollars per week. What’s more, camps typically designated one week of the year for children with a specific disability.

In central Missouri near the town of St. James, the Hashagens owned property that Rich described as “40 acres of Ozark trees and rocks.” The couple decided to build a camp there and allow children with disabilities to attend for free.

In 1980, the Hashagens formed the nonprofit Association for Midwest Disadvantaged Youth to operate Camp Brim Shire. The first building was a prefabricated wooden outhouse the couple hauled to the camp on a trailer. Then they built the first cabin. Buoyed by successful fundraising efforts and help from volunteers, more buildings were constructed.

“The camp took years to build,” Rich said. “We were blessed, and we continued to grow in numbers (of campers).” By the mid-1990s, the camp was hosting 2,500 children annually.

Sherry was an office administrator for a CPA firm, and Rich was a manager for aerospace manufacturer McDonnell Douglas in 1996 when they took early retirement, sold their home near St. Louis, and moved onto the camp property full-time. They earn no income from running Camp Brim Shire, and there are no paid employees. The camp is run by volunteers.

The camp can sleep 150, and now includes a dining hall, dormitories, cabins, a medical clinic, a recreation hall, a learning center, a picnic area, a playground, and a new in-ground therapy pool that features an easy-entry wheelchair ramp. The entire campus complies with the Americans with Disabilities Act, Rich said. “Everything was donated, except our home.”

The camp hosts about 4,000 people a year and charges a minimal fee of $2 per individual per day. The camp has agreements with agencies that assist children who have special needs, such as developmental disabilities, autism, Down syndrome, and visual and hearing impairments. Staff from the participating agencies accompany the children while they are at camp. As a result, “the kids hit the ground running,” Rich said. “They aren’t among strangers.”

Camp Brim Shire is no longer just for children with special needs. The camp hosts Boy Scouts, church groups, residents of Missouri veterans homes, and families of soldiers stationed at nearby Fort Leonard Wood. An outdoors-based remedial summer school is offered for fourth- through sixth-graders. Students from countries such as Spain, Italy, France, Germany, Croatia, Norway, and Sweden spend a week at the camp via Lions International’s Youth Camp and Exchange Program. In addition, the camp’s Angel Wing apartment offers temporary housing for families traveling with a sick or injured loved one.

Keeping it all running smoothly is a big job. Fundraising never ends. The camp receives no government funding; it relies mostly on donations from corporations and foundations, Rich said. Scouts, college students, and local Lions clubs help maintain the grounds, but the Hashagens do much of the work themselves.

“When it’s hot out there, and (Rich) is out there mowing, sometimes he doesn’t have enough sense to come in,” Sherry said. But she understands why they work so hard. “We’re giving something back and helping people.”

“We’re slowing down,” Rich acknowledged. He’s an Air Force veteran who is classified as disabled because of radiation and chemical poisoning he suffered while serving as a tactical aircraft crew chief and nuclear weapons loadmaster. “We’re going to retire again, eventually.” Someday, the Hashagens plan to turn Camp Brim Shire over to their son, Brian. He and their daughter, Misty, helped build the place.

But that day has not yet come. So, again this year, Rich and Sherry are looking forward to the arrival of warm weather and, with it, campers who are eager to enjoy the outdoors. Some of them, they’ll never forget. Like one little girl, nearly blind, who sat in her wheelchair on the deck that overlooks Camp Brim Shire’s pond and rejoiced at catching her first fish ever. She held it in her hands and ran her fingers over it. A nurse told Rich the girl was etching it into her memory.

Which helps explain why the Hashagens don’t mind that their motorhome sits idle for half the year.

If you know FMCA members whose stories beg to be told — and, yes, you can nominate yourself. Let us know and we’ll consider featuring them. Tell us a little about them and send contact information (email address and/or phone number) to associate editor John Johnston, jjohnston@fmca.com.

The Call Of The Conch Republic

Changes To FMCA Constitution And Bylaws