After a grim diagnosis, David and Julie Palmer set out on a bucket list tour that included the Grand Canyon.

Faced with a grim diagnosis, David and Julie Palmer embrace life on a bucket list tour.

It started with lower back pain. David Palmer thought he had pulled a muscle. But neither his chiropractor nor his medical doctor could help, and an MRI and a CT scan showed nothing unusual.

For three months, the pain worsened. When it became unbearable, David’s wife, Julie, took him to an emergency room near their Tampa, Florida, apartment. Some blood work led to a chest scan, and then to a heartbreaking diagnosis: inoperable and incurable stage 4 lung cancer. That day in July 2016, David and Julie, F469822, sat on a hospital bed, held each other, and wept.

In the late 1980s, David Palmer competed in triathlons alongside Lance Armstrong.

David, now 63, never smoked and was an unlikely candidate for lung cancer. When living in Dallas, Texas, in the late 1980s, he took part in grueling 60- to 90-mile bike rides with other athletes, including a teenager with whom he competed in triathlons. “He’d win, I’d get second,” David said. “That was my life — he’d win, I’d get second.” The teen who always finished first was Lance Armstrong.

David moved to Florida and stopped competing to concentrate on his career, but in 2006 he started riding a bike again. When he met Julie in a Tampa Starbucks in June 2007, David was coming off a win at the Florida State Time Trial Championships. They married 10 months later.

In January 2016, the couple sold their Tampa house and moved into a small apartment. The plan: save money, spend most of their free time boating, and count the days until David retired from his job as a sales rep for a medical device company. Then David got sick.

“A lot of people get diagnosed with cancer, and they just go home and curl up in a ball, and that’s the end of them,” he said. He and Julie were determined not to let that happen. But cancer took them down a dark, depressing path.

At Tampa’s Moffitt Cancer Center, David received 10 rounds of radiation, followed by chemotherapy infusions every 21 days. For three months, he was mostly bedridden in their tiny apartment. Julie took on the task of draining his lung fluid. David lost 30 pounds and was too weak to do much, except watch TV.

Years earlier, the Palmers had rented a motorhome and taken Julie’s daughter (one of her two children from a previous marriage) and her boyfriend to Asheville, North Carolina. “It was one of the best vacations I’d ever had,” David said. “And I loved driving the RV.”

The Palmers attended the Kentucky Derby in Louisville. 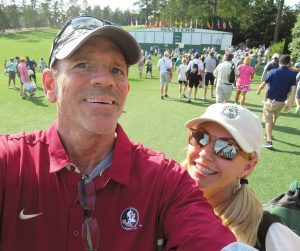 David and Julie Palmer’s bucket list tour included being part of the golf gallery at the Masters Tournament in Augusta, Georgia.

So, when he began feeling better in October 2016, the Palmers bought one. They sold it a few months later and purchased a 2017 Newmar Dutch Star, a 44-foot motorhome with a floor plan more to their liking. And in March 2017, they set out.

“The first six months or so, I was calling ahead to hospitals in whatever city we would be in, and I’d have to find an oncologist,” Julie said. “Then I would try to get an appointment, and get all of his records transferred, and try to explain what was going on — that he just needed to see a doctor and get an infusion, and that we probably would not be back, ever.”

The typical reaction from medical staff: “You want to do what?”

“There are hurdles,” Julie said. “But we found a way around them.”

After his diagnosis, David received an outpouring of support that included calls, texts, and cards, some from people he had lost touch with over the years. On the road trip — especially in the early going — he reconnected with many of those people. He called it the “family and friends tour.”

The couple felt like celebrities wherever they went, because people — aunts, uncles, cousins, friends from high school — came to see them. People invited the Palmers to stay in their homes; they took them to dinner; they offered to drive the RV back to Florida if David was unable to.

Said Julie: “All these people who did this, that, or the other for us, or who call us every week, or who David would have never thought in a million years would send him a card, he’s remained important to them even though he wasn’t great at keeping in touch.” She said the enduring lesson, one David has taken to heart, is that relationships must be nurtured. “He could have passed away without having this opportunity. He knows it was a gift.”

In Dallas, friends organized two reunions so David could see many of his old triathlete buddies. When Lance Armstrong learned of David’s situation from a mutual friend, he recorded a video in which he said: “Just know that I’m pulling for you. I have such fond memories of racing with you and training with you back in the day… I understand you and your wife are cruising around the country in the new RV. Sounds like a blast, so enjoy it.”

And David did. But on Memorial Day weekend 2017, while the Palmers were in Milwaukee, Wisconsin, for a nephew’s wedding, pain hit David hard. After the wedding, they traveled to Rochester, Minnesota, for a scheduled treatment at the Mayo Clinic. Before the appointment, the pain became so severe that Julie called an ambulance. David received 10 more rounds of radiation over three weeks. Doctors changed his chemotherapy regimen from infusions to a pill.

Then the Palmers set out again, this time intent on checking items off David’s bucket list.

The Palmers purchased an Indian Springfield motorcycle after enjoying the ride in Sturgis, South Dakota.

At the world’s largest biker rally in Sturgis, South Dakota, they met old friends, rented a motorcycle, and then bought their own, an Indian Springfield. In Jackson, Wyoming, they stared in awe at the total eclipse of the sun. “It was unbelievable,” David said.

They visited Yellowstone National Park, and then began dodging wildfires, first at Glacier National Park, and again near Portland, Oregon, where ashes rained on their motorhome. They enjoyed the beautiful Oregon coast for several weeks before heading to California’s Napa Valley.

In wine country, Julie wanted to surprise David with dinner at The French Laundry, chef Thomas Keller’s world-renowned restaurant known for its sublime food, impeccable service, and sky-high prices. She had no luck making a reservation until getting an assist from a girlfriend with connections.

“The minute we walked in, they put champagne in our hand,” Julie said. Over the next four hours, servers presented an elegant 13-course meal with wine pairings. The Palmers ate until they were ready to burst, then they awaited the check. Instead, a note arrived that said, “Compliments of Thomas Keller and The French Laundry.” 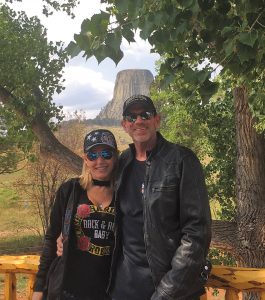 The Palmers, by the way, say they are not wealthy. Before David got sick, the couple increased his disability insurance to the max. “If we hadn’t,” Julie said, “we wouldn’t be able to do this.”

They planned to spend more than a month exploring wine country. But while camped at the fairgrounds in Calistoga, California, they were awakened after midnight by someone pounding on their motorhome door and warning of approaching wildfires.

David lifted a shade and saw flames less than two miles away. They broke camp, then Julie called 911 to get an escape route. The dispatcher said there were three roads. Flames had engulfed one; a tree was blocking another; the third was unlit and wound around a mountain, making it unsafe for a large motorhome.

“We were scared to death,” Julie said.

After they spent several tense hours in the campground, the tree was cleared, and they managed to escape to San Francisco for a night. They then met up with their children in Las Vegas, where David and Julie spent most of the rest of the year. Highlights included a helicopter ride into the Grand Canyon, as well as several celebrity-studded Vegas shows. At one, Julie was photographed with Lady Gaga.

In April, the Palmers traveled to Augusta National Golf Club in Georgia for the Masters Tournament. In May, they were among the throngs of people in Louisville, Kentucky, for the Derby. And the road trip continues.

“I probably never would have done anything like this if I’d retired,” David said. “Or I wouldn’t have gone back to see my friends and family. So for me, it’s been a blessing. And as far as Julie and me, it’s strengthened our relationship.

“So, thank you to whoever invented the RV.”

He wakes up each morning not knowing how he’ll feel. He can no longer ride a bicycle or play golf. Walking tends to wear him out. “Not every day is perfect,” David said, “but we have fun. I try to do everything I can.”

When he competed in triathlons, he relied not just on physical strength, but also grit, willpower, determination, and mental toughness. David brings all that to this journey, every day. Julie does, too.

“All the stuff we’re doing is keeping him busy, and keeping his mind busy,” she said. “It’s giving him a purpose, and things to look forward to. He’s continuing to live and making every minute count.

Oh Buoy, Can This Guy Ski!

The Art Of Fly-Fishing