Jayco got its start on the Bontrager family farm in this barn.

From humble beginnings on the family farm to becoming a subsidiary of one of the world’s largest RV manufacturers, the company continues to spread its wings and to emphasize family values.

Lloyd Bontrager grew up Amish, earned an 8th grade education, and always liked birds. From an early age, he was an entrepreneur. As a young boy, he built birdhouses and sold them while traveling up and down the roads between Middlebury and Goshen, Indiana. When it came time to start his own RV business, he chose the name “Jayco,” based upon his middle initial, “J,” and his fascination with birds. He believed camping represented freedom, and the fact that birds flew free tied it all together, so the Jayco name and logo — depicting a blue jay in flight — were designed to reflect this. 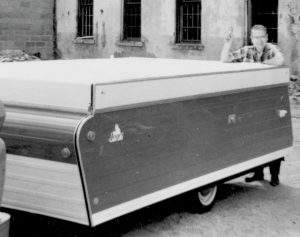 The fledgling company started in a barn and two former chicken coops on the family hobby farm. This year Jayco marks a milestone and celebrates its 50th anniversary.

In 1964 Lloyd Bontrager helped Starcraft Corporation to enter the business of building fold-down camping trailers, also known as pop-up campers. After a few years, he concluded that he could build a better product. He designed a lift system for pop-up camping trailers and patented it. In 1968 he began to build pop-up campers on the family farm, and Jayco was born. 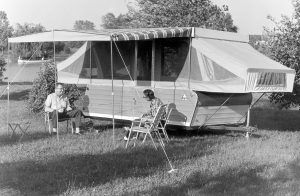 When Lloyd and his wife, Bertha, first started the company, they were focused on family. They always considered their customers, dealers, suppliers, and employees as family and endeavored to treat them with honesty and respect. In 1970, the first Jayco dealer meeting was held, and it, too, was a family affair. Employees, suppliers, and dealers mingled and shared potluck lunches. Through the years, many customer rallies have been held, as the RV owners are considered part of the family. That tradition continued over the years as Lloyd’s sons, Wilbur and Derald Bontrager, took the helm.

That first year on the farm, 132 campers were built and sold. In 1969 Jayco moved to its current location in Middlebury, where there was plenty of land for future expansion. 1991 saw the purchase of the RV division of Starcraft Corporation, and in 2008 Jayco purchased the assets of Travel Supreme and formed the new Entegra Coach division. Open Range RV was added to the Jayco family in 2014, and the Highland Ridge brand of towable RVs resulted.

Jayco employs approximately 4,300 people, between the Twin Falls, Idaho, and Middlebury, Indiana, locations. Total production has grown to around 60,000 units annually, of which 800 are Entegra Coach motorhomes. 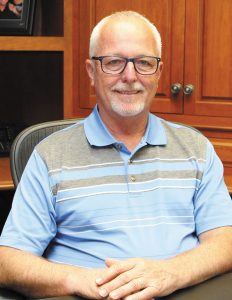 Derald Bontrager, son of company founders Lloyd and Bertha, remains at the helm at Jayco, which is celebrating its 50th year.

This expansion hasn’t changed the family mindset of Jayco officials, and those values have carried through to today. Derald Bontrager, the current president and CEO, stated, “We build one unit at a time for one customer at a time. The investment that a customer makes in a pop-up camper is often just as great as a person buying a [Entegra] Cornerstone in relationship to their financial status in life, and we need to remember that. The expectations are the same no matter what product we build.”

Jayco officials note that they intend to continue operating as they are for a long time. Their goal isn’t to be the biggest, just the best. The 2016 acquisition of Jayco by Thor Industries provided Jayco with extensive resources for future growth and expansion. Jayco officials chose Thor as their partner because of Thor’s history of allowing companies they acquired to continue to operate independently. They knew Thor wouldn’t come in and make sweeping changes. 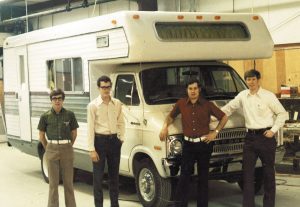 All About the People

The Bontragers believe they have the management team in place to carry them through the next 50 years, and Derald is still doing the same thing today that he did 10 years ago. He noted that he doesn’t plan on retiring yet. He enjoys his job, and after 43 years can’t think of a career he would have enjoyed more. For him, and for Jayco, it’s all about the people — employees, customers, and dealers.

Cooking On The Go: Pour It On!

Airstream: The Making Of A Movement