At Etowah Indian Mounds State Park in Georgia, marble images of a woman and man were found in a grave inside Mound C, where town nobles were interred.

Discover the remains of a thousand-year-old riverside village that was part of the mound-building Mississippian culture.

A white-tailed deer watched as dugout canoes slid into the shade of the trees along the river. Men stepped onto the sandy bank. The deer flicked its tail and slipped unseen back into the forest.

The men stretched their sore muscles. It had been a long day. One of them found some walnuts and persimmons and shared them. It was pleasant here by the river; much cooler than back home near The Great River. They talked of home and families and were quiet for a while. 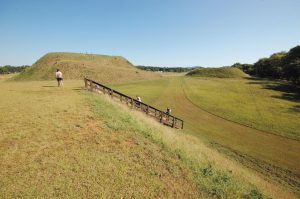 Taken from the top of Mound B, this view shows Mound A on the left and the smaller Mound C to the right.

The chief of their expanding village had sent them to explore and find a better place for their people to live, raise their families, and grow their crops. Early the next morning they searched the area and agreed this was the land they sought. The soil was good, wild game was plentiful, and this place was, well, just a nice place.

The year was A.D. 950 or so, and these Mississippian mound-builder scouts had found a new home for their village. Eventually, a 54-acre settlement was built there, with 10-foot-deep moats on three sides. The fourth side bordered a river. A palisade of 12-foot-tall timbers was constructed behind the moats, fortifying the village. Today we call the town Etowah, and it’s at Etowah Indian Mounds State Park.

The town existed from approximately A.D. 1000 to A.D. 1550 and was home to several thousand American Indians. Over time they built six earthen mounds; three impressively large ones are still standing.

Mound A, the largest and tallest mound, is 63 feet high — about as tall as a six-story building. It covers three acres at the bottom and one acre on top. Think of the number of baskets of dirt they had to dig up and then hand carry to the construction site, up a mound that grew taller with every trip. Visitors can see the borrow pit that was dug to create the mound. 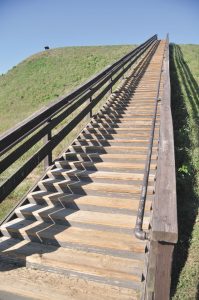 Steps lead to the top of Mound A, the tallest mound at the site at 63 feet. It is believed that the chief priest lived in a temple atop the mound.

Steps of logs and dirt lead from the plaza to the top of Mound A. It is believed that the chief priest and his family lived up there, next to the temple. When a chief died, his temple was destroyed and a layer of fresh dirt added to the top of the mound, wiping the slate clean, so to speak, for the next leader.

There likely was a council house on top of Mound B, as well as homes for the church staff; that is, the lesser priest. Steps lead from the plaza to the top of this smaller mound also.

Behind these two mounds is Mound C. It is a burial mound, and the smallest of the remaining mounds. It does not connect directly to the plaza. A complete excavation of Mound C led to the discovery of 350 graves and some of the most significant finds from the Mississippian culture.

A 100-yard-square plaza formed the center of town. It was bordered by a short rock wall and served as a public market, a sports center, and a stage for religious ceremonies. Private homes were built around the plaza. Social standing determined how close a family’s home was to the plaza. Location has always been everything!

River cane was the plastic of the day. This plant, similar to reeds, could be used to make blowguns, arrow shafts, thatch roofs, floor mats, and baskets. In general, life was good. The sandy soil of the river basin was reasonably painless to plow with digging sticks and stone hoes. Residents planted corn, beans, and squash. Hunting and fishing were good. Deer, wild turkeys, and black bears lived in the forest. In the river were catfish, gar, and drum, as well as freshwater mussels and turtles. 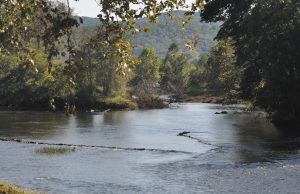 A V-shaped rock weir in the Etowah River demonstrates how fish traps were built by Etowah’s original inhabitants.

The Indians built huge fish traps by placing medium-sized stones in the shallow river in a V-shape; then, they put a basket at the point of the V. Fish swam downstream and right into the basket — and ended up in a clay pot over an open fire. An example of one of these fish traps is in the river today.

Religion and politics were pretty much one and the same for this culture. Remarkably detailed artwork on pottery and other artifacts offers some insight into their religious beliefs. Apparently they believed in an afterlife and perhaps practiced ancestor worship.

The chief priest lived on a mound. Nobility were laid to rest in Mound C, in elegant costumes and with possessions that might come in handy in the afterlife. Ceremonial axes, pendants made of shells, and engraved gorgets (carved seashells worn around the neck) were discovered in their graves.

The park’s excellent museum displays two marble statues, 2 feet high, depicting a sitting man and woman. They were discovered in a grave at the base of Mound C. Since the statues were broken when found, archaeologists believe this rushed burial was connected to an attack on the village. Evidence shows that the palisade walls were burned down. Sometimes valuable objects were buried to hide them, and an attack serious enough to burn down the palisade walls would convince most folks it was time to hide the good dishes. Perhaps the attackers found, broke, and buried the statues, thus ritually killing them.

Many exceptionally well-preserved stone, wood, and seashell artifacts are displayed in the museum. One intricately carved shell gorget depicts an eagle warrior or falcon dancer. The relics show how the people of Etowah adorned themselves with feathers, paint, tattoos, copper ear ornaments, and beads of shell. Archaeologists have learned a lot about these people from what has been found here, yet less than 10 percent of the site has been excavated. Thus, Etowah Mounds is the most intact Mississippian culture site in the southeastern United States.

What Happened To The Mound Builders?

In all, around 40,000 mound towns were built during the Mississippian period, which lasted from approximately A.D. 800 to A.D. 1600. Sites have been found from Wisconsin and Minnesota south to Georgia and out onto the Great Plains.

But where did the people go? Why did this culture end?

Some historians blame the arrival of European traders. The social control of the chiefs was no match for the lure of merchandise, and residents moved away from their town-centered culture to be near trade villages.

Another guess is that their culture, like so many others, may have just unraveled. War was clearly involved, but it may have been war from within the larger confederacy. The smaller villages were required to pay tribute to the chief priest and the capital city. All the rulers came from the same powerful family. Over the centuries, this lineal government began to cause problems for the society.

A strict class system; unfair trade practices; and forced labor to maintain the mounds, the moats, and the massive walls of the capital doubtless did little to diminish any growing resentment. Some believe rebellion brought it all down.

Yet a third theory is that European diseases spread across the land as the people traded with other tribes. This overwhelming enemy killed thousands of Indians.

Whatever the cause, the descendants of the Etowah mound builders are believed to be the Creek Indians. These tribes now live in Georgia, Oklahoma, Alabama, and Florida. The name Etowah comes from a Creek Indian word meaning “high tower” or “city.” The name may be a variation of the word for “mother town.” 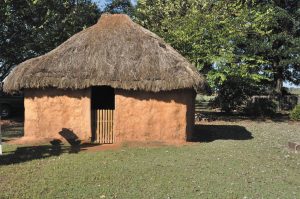 Visitors can examine this reconstructed mud hut, an example of what a house at Etowah may have looked like.

In 1838 the land containing the Etowah Mounds was purchased by Col. Lewis Tumlin. It remained in his family for 125 years until the state of Georgia purchased it from Henry Tumlin in 1953. He became the first superintendent of the park and remained so until 1981.

It doesn’t matter if you come to Etowah Indian Mounds State Park by dugout, car, or RV; you’ll have more privileges than the average citizen of the village ever had. You can climb to the top of any of the mounds (assuming you are able and wish to). A bridge over the now-dry moat is there, and you can take a nice, level walk to the river, even if you don’t climb the mounds. Try out a swing, watch the river roll by the big fish trap, and enjoy the day. That’s what I did when I explored the mounds. There were only a few people around. It was quiet and peaceful.

The Indian explorers didn’t know where they were going, but they found this spot. I had a GPS and still missed the entrance; it’s easy to do, so keep an eye out for the gate. 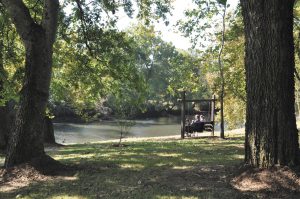 A swing rests in a shady spot along the Etowah River in Georgia’s Etowah Indian Mounds State Park.

Expand your understanding by also visiting Ocmulgee National Monument, near Macon, Georgia. Like Etowah, Ocmulgee is a fascinating mound area with a visitors center and museum. Admission is free. It is open daily from 9:00 a.m. to 5:00p.m.

A Pearl in the Plains of West Texas