Patrick Moeller and Eagle One at the RV/MH Hall of Fame and Museum.

Eagle One Lands At RV/MH Hall Of Fame And Museum

The owner of a 2006 Forest River Georgetown motorhome has donated the vehicle to the RV/MH Hall of Fame and Museum in Elkhart, Indiana. But this is no ordinary coach. It’s the Eagle One, which for the past 11 years has been a rolling shrine to the Philadelphia Eagles pro football team.

Real estate developer and big-time Eagles fan Patrick Moeller of Long Beach Island, New Jersey, along with his wife and children, have traveled more than 125,000 miles in the Eagle One to home and away Eagles games, making stops at 30 of the 32 NFL stadiums. After the Eagles defeated the New England Patriots in Super Bowl LII on February 4, 2018, Mr. Moeller decided to retire the motorhome.

The Eagles’ team colors — midnight green, silver, black, and white — and logos appear throughout the interior and on the exterior of the $300,000 motorhome. It is equipped with five plasma TVs, an Xbox, and a deep fryer for making doughnuts. The interior walls are adorned with the autographs of NFL stars who have visited the motorhome, such as Stewart Bradley, Jon Runyan, Reggie Brown, and Brent Celek. The exterior features graphics of Eagles players. Mr. Moeller said that over the years, he was stopped seven times by police officers who just wanted to see the interior.

For more information about Eagle One and the Moeller family’s story, visit www.youtube.com/watch?v=yysjAqcDUP4. 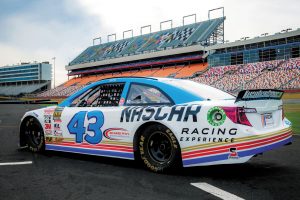 The Texas Motor Speedway location joins others, such as this track in Charlotte, North Carolina.

LifeStraw, which sells water filtration and purification products, has teamed up with RV manufacturer Airstream for a “Clean Water Across America” campaign.

This year, from May through August, representatives of the companies will cross the United States in an Airstream travel trailer to highlight the importance of clean, safe drinking water and the value of outdoor adventure. Planned stops include national forests, retail operations, and outdoor festivals.

Winnebago has launched three wheelchair-friendly Type A motorhomes: the gas-powered Intent 30R AE and Adventurer 30T AE, and the diesel-powered Forza 34T AE. AE stands for “accessibility enhanced.” With features such as an accessible bathroom and sleeping arrangements, the motorhomes are designed to provide people with disabilities greater freedom and comfort when traveling. 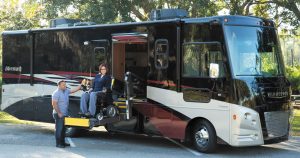 Winnebago’s Adventurer 30T AE motorhome is one of three new wheelchair-friendly models, each outfitted with an accessible bathroom and sleeping space.

Winnebago has been customizing models for accessibility for 40 years. Now, three standardized floor plans with commonly requested features are available. These include a platform wheelchair lift with an 800-pound capacity; a powered roll-up lift door with wall-mount and key-fob remote controls for wheelchair entry and exit; expanded hallway and bathroom areas; an electric adjustable queen-size bed; thermostatically or remote-controlled roof vents; wall-mounted light and generator switches; lower installation of the systems monitor panel; an optional six-way power transfer seat; and optional lower microwave oven placement. The bathrooms include a roll-in shower; a raised toilet with assist bars; a roll-under sink; and other features. Further customization is available. 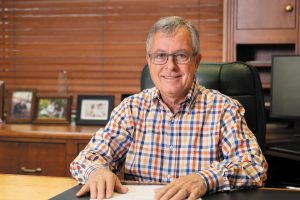 Jayco chairman Wilbur Bontrager, a member of the RV/MH Hall of Fame, retired from full-time duty December 31, 2018, after 47 years with the company that his parents founded. According to a Jayco news release, Mr. Bontrager will partner with Jayco on a part-time basis as the company continues to be led by the Bontrager family, with his brother Derald as president and CEO.

In 1968 Wilbur Bontrager helped his parents, Lloyd and Bertha, set up the original Jayco facility on the family farm. He officially began his career with the company in 1971, and worked in many parts of the organization. After serving on Jayco’s board of directors for many years, he was elected board chairman in 1993. He also was a member of the RV Industry Association board of directors from 1994 to 2002, and served as chairman from 1999 to 2000.

The board of directors of the RV/MH Heritage Foundation announced the names of 10 people who will be inducted into the RV/MH Hall of Fame as the Class of 2019. 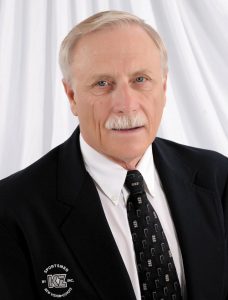 Daryl Zook, founder of towable RV manufacturer K.Z. Inc., will be among 10 inductees in the RV/MH Hall of Fame Class of 2019.

The induction ceremony and dinner is set for August 5, 2019, in Elkhart, Indiana.

EnhancedCamping.com, a searchable database of businesses patronized by campground and RV park guests, is seeing an uptick in usage. Consumers are spending more time on the site and are clicking on more pages, according to Brian Schaeffer, president and CEO of AGS, which launched the website in spring 2018.

Visitors to the site can type in the city or state they wish to visit and then click on a drop-down menu of services, such as restaurants, RV repair shops, pet services, shopping, and more. Users also can search for campgrounds and RV parks.

RVers intrigued by cool cars and out-of-the-ordinary machines that move may want to take note of two upcoming shows.

*The 29th annual Pacific Coast Dream Machines Show is set for 10:00 a.m. to 4:00 p.m. April 28, 2019, at Half Moon Bay Airport, in Half Moon Bay, California, about 20 miles south of San Francisco. It will feature 2,000 driving, flying, and working machines from the 20th and 21st centuries, including cars of various eras and styles; Model T fire engines; vintage buses; custom motorcycles; tricked-out trucks; antique engines and tractors; and historic military aircraft. Among the highlights: a mass synchronized start-up of the engines of all the displayed machines at 10:00 a.m., noon, and 2:00 p.m. For more information, visit www.miramarevents.com/dreammachines. 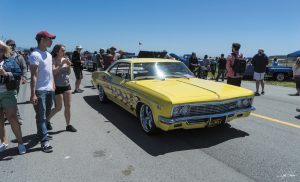 The Pacific Coast Dream Machines Show will display sports cars and much more.

Cooking On The Go: A Taste Of Spring