The Gol Stave Church is among several fascinating structures and statues at Scandinavian Heritage Park in Minot, North Dakota. It is a replica of the original, which was built in the 1200s and still stands in Oslo, Norway.

Enchanting things to see, taste, and do while in Minot, North Dakota, for FMCA’s 100th International Convention and RV Expo.

By Peggy Jordan, Associate Editor
May 2019

FMCA members will meet in Minot, North Dakota, for the association’s 100th international convention, August 14-17. And just as Minot formed quickly after the arrival of the railroad, an RV city will materialize within days on the grounds of the 188-acre North Dakota State Fairgrounds, where the event will take place. 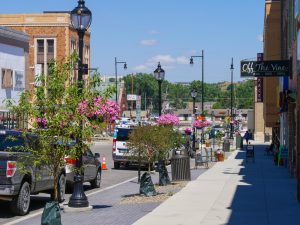 The Main Street area in Minot is home to several restaurants and pubs, shops, and other businesses.

It will be a great setting to meet and greet friends old and new at the convention, nicknamed “Minot Magic — 100 Times The Fun.” The agenda will include shopping for RVs and related items; attending seminars on a variety of topics; making crafts; taking in daytime and evening entertainment; and, of course, enjoying good old FMCA camaraderie.
This article highlights some of the most intriguing places to see in and around Minot. You’re encouraged to start planning your “must-sees” now, so you don’t run out of time once you get there!

From “Magic City” To “Little Chicago”

The railroad’s arrival in 1886 spurred a seemingly magical population growth, which reached 5,000 in just five months — and earned the town its first nickname, “Magic City.” Like other boomtowns, Minot had a noisy minority that ignored laws, such as those forbidding alcohol sales, even after North Dakota joined the Union as a dry state in 1889, and more so after national Prohibition was enacted in 1920. During Prohibition, some residents poured their efforts into a scheme that transported adult beverages from Canada through Minot, and east to the Windy City. Thus, Minot gained its other nickname, “Little Chicago.”

Speculation that Al Capone himself came to town still abounds. To play up this legend, a speakeasy pub named Saul’s recently opened. Its motto is “Find us if you can.” Thankfully, Saul’s publishes its phone number, so you can call ahead and ask where it is — and get the password! Try (701) 401-2105. 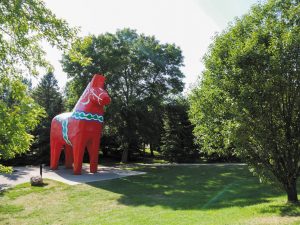 Representing Sweden at the Scandinavian Heritage Park is a 30-foot-tall version of a Dala horse, the country’s most recognizable symbol.

Despite the wild ways of some early residents, a solid group of Scandinavians and other settlers built Minot’s landmarks and culture. Scandinavian Heritage Park pays tribute to them today. But the park is not just about Minot’s pioneers; it also honors the cultures of all five Nordic countries in amazing ways.

The park includes Gol Stave Church, a full-size replica of a church built around 1250 that still exists in Norway. In addition, statues honor legendary explorer Leif Erikson; the humble Sondre Norheim, a Norwegian immigrant credited with inventing modern snow skiing; and writer Hans Christian Andersen. The park also is bedecked with an authentic Finnish sauna; a Danish windmill; a 30-foot Dala horse (a Swedish icon); a replica of a storehouse, called a stabbur; and a house originally built more than 240 years ago in Norway and reconstructed on the site. But before you begin touring these attractions, visit the Scandinavian Heritage Center, which has exhibits; a gift shop; and the Visit Minot office, full of tourism information. 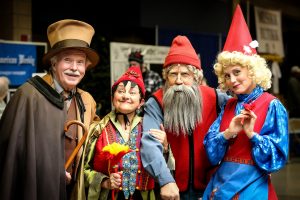 Characters from traditional Scandinavian folklore (above) are represented during the Norsk Hostfest, Minot’s biggest annual event.

The signature event that defines Minot is related to its Scandinavian roots: the Norsk Hostfest. Music, tasty food, dancing, and lots of general merriment make this the largest Scandinavian festival in North America — humorously dubbed as “Pure Scandimonium!” The event is held each year at the North Dakota State Fairgrounds. The 2019 fest runs September 25-28; visit www.hostfest.com for more information.

Another Minot must-see is Roosevelt Park Zoo. Actually, you may want to explore Roosevelt Park, with its expansive offerings, first. These include a war memorial and Medal of Honor memorial. A statue depicts President Theodore Roosevelt surveying the scene from atop his horse, a reminder of the years he spent in the nearby Badlands. The park also has a gazebo, walking trails, rentable shelters, a bicycling trail that leads to the fairgrounds (where the convention will be held), a public swimming pool, and playgrounds.

The zoo collection is substantial, especially for a town of 50,000 or so. The zoo first opened in 1920 and has survived two big floods of the local Souris (or Mouse) River, in 1969 and in 2011. Local critters such as American bison are there, but so are lions, giraffes, lemurs, camels, bobcats, and a great assortment of birds. It’s open daily in summer. Admission is $9 for adults, $8 for seniors and military adults, and $5.50 for children ages 3 to 12. 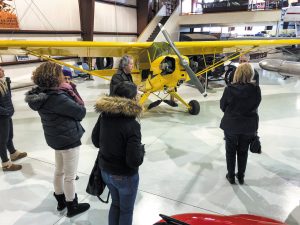 Another major local attraction is the Dakota Territory Air Museum. Its three huge hangars house a contingent of historical planes, both civilian and military, as well as military uniforms and memorabilia, motorcycles, and a replica of the Wright Flyer. Additional aircraft are outside on the field. The museum is close to the Minot airport, on the northeast side of town. It is open daily in summer and has admission fees of $10 for adults, $5 for kids 6 to 17, and free for children 5 and under. Active military receive half-off admission.

Minot’s biggest employer is approximately 15 miles north of town. Minot Air Force Base is home to the 5th Bomb Wing, part of the Air Force Global Strike Command, and the 91st Missile Wing, which maintains and secures intercontinental ballistic missiles. A lengthy single runway can be used by many kinds of aircraft. The base has housing for thousands of personnel, making it one of the largest in the Air Force. This adds more than 2,000 to the population of Ward County in which Minot is located. Not surprisingly, the base has a substantial economic impact on Minot — estimated at more than $540 million in 2018 alone.

Minot Air Force Base is Minot’s largest employer, and added an estimated $540 million to the city’s economy last year.

According to the Minot Air Force Base website, a public tour of the base will be offered on August 21, 2019. To take the tour, you must obtain approval from the base 30 days in advance. For details about the requirements, visit www.minot.af.mil/Contact-Us/Comm-Rel/.

For a look at another form of transportation, check out the Railroad Museum of Minot. It traces the impact the railroad has had on the development of the city and the region up to the present day. This collection displays tools, freight, hardware, control equipment, maps, photos, uniforms, and more. The museum is open on Saturdays only from 10:00 a.m. to 2:00 p.m. Admission is $5 for adults; $4 for seniors and military; $3 for children ages 5 to 12, and free for children 4 and under.
Outdoor enthusiasts may enjoy the several golf courses in the area, including the Jack Hoeven Wee Links, a course just for children. Walking and bicycling trails are available, too. Canines can sniff and explore in the Dakota Bark Park.

These attractions and others are detailed in Minot’s Official Visitors Guide, which can be downloaded at the Visit Minot website or obtained by calling them (see contact details below).

When you’re in Minot for FMCA’s 100th International Convention, consider setting aside extra time to explore and enjoy all the city has to offer. It’s truly a magical place. 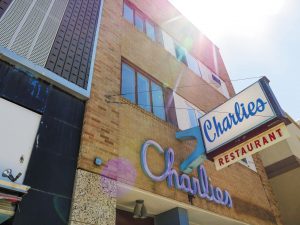 For additional listings, consult a campground directory or app, or visit the FMCA Marketplace directory at FMCA.com (also published in the January issue of Family RVing).

Approximately 20 Miles Or Less From Minot:
(Listed from nearest to farthest away)

Museum Dedicated To The U.S. Army Opens In...

The Blue Ridge Institute And Museum