Bob Martin, Thor president and CEO, said the acquisition of a European market leader puts Thor in a strong growth position. Europe is the world’s second-largest market for RVs.

The acquisition excluded Erwin Hymer Group North America (EHGNA), which filed for receivership on February 15, 2019, amidst reports of an investigation into financial irregularities. EHGNA’s Ontario, Canada, factories in Cambridge and Kitchener were shut down, and about 900 employees were terminated. The North American business, formerly Roadtrek Motorhomes, was purchased in 2016 by EHG.

In March, the Waterloo Region Record reported that court documents indicate EHGNA could have a new owner as early as April, 2019.

ASA Electronics has teamed up with other companies to develop technologies that function with ASA’s iN-Command Control Systems. 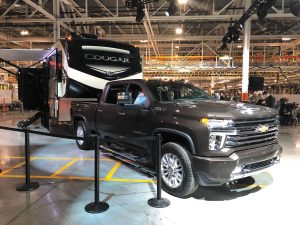 ASA Electronics and Chevrolet have produced a “smart trailer” system. It will integrate the 2020 Chevy Silverado HD pickup truck with ASA Electronics’ iN-Command Control Systems, which allow RV owners to monitor and control a number of functions, including tank levels, heating and air-conditioning, and slideouts.

From the driver’s seat, Silverado owners will be able to use the truck’s center screen to check the travel trailer’s water tanks, turn on its air conditioner or water heater before arriving at a campground, and more.

The smart trailer system will be accessed through the myChevrolet mobile app, either on compatible Android and iOS smartphones, or on the vehicle’s infotainment system via Android Auto or Apple CarPlay.

ASA Electronics worked with MORyde International, Dexter, and Keystone RV to develop the LoadSafe On-board Weighing System, which is designed to take the guesswork out of loading an RV. It made its debut on the Keystone Fuzion 427 triple-axle toy hauler.

The Fuzion’s Dexter axles and MORyde hitch were designed with weight-sensing technology that can communicate with the iN-Command Control Systems app. While the RV is being loaded, sensors measure the weight distribution and deliver information to the RV owner’s smart device. Two zones of measurement — the trailer axles and the hitch pin — turn from green to red if the weight in that zone exceeds the recommended limit.

Since 2010, during the week preceding Memorial Day weekend, men and women from the Greatest Generation have rolled into Washington, D.C., in chartered buses, courtesy of a nonprofit organization called VetsRoll. The buses carry military veterans and “Rosie the Riveters” — women who worked in factories during World War II so that more men could fight overseas. 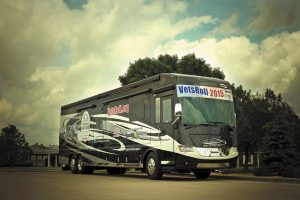 VetsRoll will transport more than 200 World War II and Korean War veterans, as well as former wartime factory workers, to Washington, D.C., from May 19-22 to see memorials and other sites.

Typically, state troopers and hundreds of motorcyclists escort the convoy of buses. And for the eighth consecutive year, Newmar Corporation has loaned VetsRoll a motorhome to lead the way. VetsRoll typically has use of the motorhome for about a month, and takes it to events such as parades and fundraisers.

VetsRoll is similar to Honor Flight Network, which flies World War II veterans to Washington, D.C., to view war memorials in one day. But because that one day can be hard on elderly travelers, the Finnegans decided to offer a four-day bus trip as an alternative.

VetsRoll10, set for May 19-22, will transport more than 200 World War II and Korean War veterans, as well as Rosies, to the nation’s capital to visit memorials, Arlington National Cemetery, and other sites. VetsRoll pays all their expenses, including hotels and meals. More than 1,700 veterans and Rosies have made the journey since VetsRoll started.
For more information or to donate, visit www.vetsroll.org.

Stephenville, Texas-based Emerald Luxury Coaches, which has been producing Prevost X3-45 bus conversions since 2015, has added Prevost H3-45 conversions to its 2020 model-year lineup. 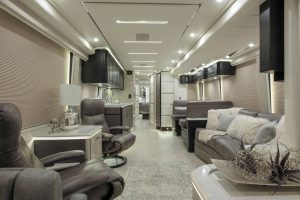 The 2020 lineup from Emerald Luxury Coaches will include Prevost H3-45 conversions.

The H3-45 is Prevost’s “touring bus” platform, which has a higher profile, panoramic windows, and larger storage capacity. The 58-volt house electrical system features Volta Power System’s automotive-grade lithium-ion batteries. Other features include oversized high-definition LED TVs and a Creston-based control system, which can be run through a phone, tablet, or smart TV. 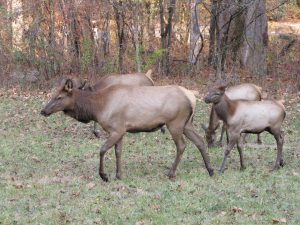 Great Smoky Mountains National Park is popular in part because of its plentiful wildlife, such as these elk, photographed near the Cherokee, North Carolina, entrance.

The Elkhart County Convention & Visitors Bureau plans to open a new visitors center early in the summer of 2019. It will offer personalized trip recommendations and information about attractions throughout the county, including the communities of Elkhart, Goshen, Bristol, Middlebury, Nappanee, and Wakarusa, as well as Shipshewana in LaGrange County.

Elkhart County is a key hub of RV manufacturing in the United States. It is also home to the RV/MH Hall of Fame and Museum.

The new Visitor Center will be at 3421 Cassopolis Street in Elkhart, less than a quarter mile from its current location. For information, call (800) 262-8161 or visit www.amishcountry.org.

Airstream announced in March 2019 that it plans to create a 12-member Customer Advisory Board, composed of current Airstream owners, to help shape the direction of the company and its products. Board members will take part in early product previews, discuss product road maps, and provide counsel for upcoming initiatives. They will serve one-year terms on a volunteer basis.

The 2019 application deadline has passed. As of the end of March, the selection of board members had not been completed. 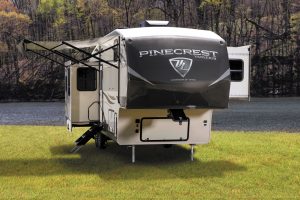 The PineCrest 335RLP fifth-wheel is produced by VanLeigh RV, now a division of Tiffin Motorhomes.

VanLeigh RV, a manufacturer of fifth-wheels in Burnsville, Mississippi, is now a division of Tiffin Motorhomes, company officials announced in March 2019. VanLeigh and Tiffin will continue separate operations by maintaining their current production plants, dealer networks, customer service, warranties, parts, and vendors, according to a press release.

VanLeigh RV was built by Van and Leigh Tiffin, who are the son and grandson, respectively, of Tiffin Motorhomes founder Bob Tiffin.