Family Matters: A Home Away From Home

In their time of need, a family turned to the FMCA campground. 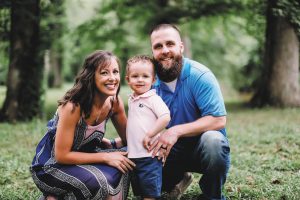 Jason and Lori Hammack and their 2-year-old son, Brody, stayed at FMCA’s Cincinnati campground while Brody was treated at a local hospital.

Of all the benefits available to FMCA members, one in particular stood out to the Hammack family, F500163: the FMCA campground. In fact, it was the reason they joined last July.

Jason and Lori Hammack and their 2-year-old boy, Brody, live in London, Kentucky. That’s about 2½ hours south of Cincinnati, Ohio, where FMCA’s headquarters and campground are located. In the summer and fall of 2019, they needed a place to stay while Brody received chemotherapy treatments at Cincinnati Children’s Hospital Medical Center.

Brody, born in March 2017, is the Hammacks’ only child. He was healthy until his second birthday, when he developed a low-grade fever. At first, his doctor thought it was a virus, but the fever persisted. Brody lost his appetite, he turned pale, and he lacked energy. His parents remember their reaction when blood tests in early April 2019 revealed that their son has leukemia.

“A whole lot of fear, fear of the unknown,” Jason said.

“Devastation,” said Lori. “The air leaves the room. You can’t breathe. You can’t process. For a second, you’re angry. Your world has crumbled.”

Within a couple of days, the Hammacks learned more details about the illness. Brody was diagnosed with a form of acute lymphoblastic leukemia, the most common type of cancer in children.

The Hammacks decided that Brody would be treated at Cincinnati Children’s. “It was a no-brainer,” Jason said. “We knew they were one of the top-ranked (children’s) hospitals in the nation.”

Jason and Lori remained with Brody during his 33-day hospital stay in the spring of 2019, after which he was allowed to go home. For much of the summer, his parents drove him back and forth to doctor’s appointments in Cincinnati, with only an occasional overnight stay. But then, before an eight-week regimen of outpatient chemotherapy treatment began in early August, doctors said Brody could venture no farther than a half hour from the hospital in case he needed blood transfusions or platelets.

Lori began looking at options. Cincinnati’s Ronald McDonald House was full, so she searched for places that could accommodate their Fleetwood motorhome. That’s when she came upon FMCA and its campground in the Cincinnati suburb of Newtown.

FMCA members can stay up to seven nights a month at the campground, with the first two nights free. Lori explained her family’s situation to Chris Smith, FMCA’s CEO, who approved an extended stay.

For a week in August, Jason remained in Kentucky, working at his federal government job. But, “It was just too hard on all of us,” Lori said. So he took paid time off and joined his family at the campground. Lori, a dental assistant, also took time off from work.

They brought toys from home. Brody learned to ride a tricycle in the campground parking lot. He drove around in a toddler-sized, battery-powered Jeep. He and his parents fished in a nearby lake.

The Hammacks knew the chemo treatments would cause Brody to lose his hair. So, one night in the campground, both father and son had their heads shaved. “He thinks he’s got a cool haircut, just like his dad,” Lori said.

Brody responded well to treatment. “He’s rockin’ it. He’s amazing,” his mother said. “(Doctors) told us to expect fevers, because his immune system was compromised. They told us to expect mouth sores.” None of that happened. Only one blood transfusion was necessary.

“We have had faith, we’ve had tons of prayers, and we know that’s why Brody has done so well,” Lori said.

“I feel like the Lord has wrapped his arms around him and taken care of him through this whole process,” Jason added.
Through it all, Brody never lost his smile. “This is his normal life as a 2-year-old,” Lori said. “He doesn’t know any different.”

On October 7, the Hammacks received word that Brody could go home. “He is in remission,” Lori said, and his prognosis is excellent. He will continue to be treated for the next three years.

Now, the Hammacks envision a return someday to the FMCA campground. And they trust it will be under better, more pleasant circumstances, perhaps as part of a visit to a nearby amusement park with their happy, healthy boy.

Family Matters: Retirement With A Purpose