Are you traveling to Wyoming? If so, it may be helpful to know what the locals mean by “dout.” Watch out for “barking squirrels,” and be careful of “silk” — it can hurt. Oh, and by all means, do not eat the “brisket.” 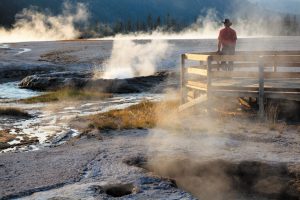 Learning local lingo is entertaining and helpful, too. If you’re sitting by the campfire and someone says “dout” it, don’t look at them quizzically. “Dout” means to put out the fire. Those “barking squirrels”? They’re prairie dogs. If someone yells, “Watch out for the silk!” be thankful for the warning; “silk” is a local term for barbed wire. When you’re holding the “brisket,” grasp it tightly, because you’re going for a ride. You see, “brisket” means the horn of the horse’s saddle. Oh, and if someone suggests “spinning cookies,” you’ll probably want to decline, especially in your RV. That phrase means turning your car in circles, leaving tire marks — otherwise known as car doughnuts. They’re not edible, either.

Beyond the lingo, here’s an intriguing Wyoming tidbit: How did daredevil George Hopkins become the first, and only, person to descend the gigantic butte known as Devils Tower without first climbing it? Ponder that awhile. 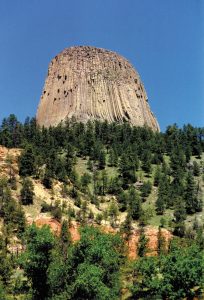 When President Theodore Roosevelt declared Devils Tower the United States’ first national monument in 1906, the printed proclamation inadvertently dropped the apostrophe in Devil’s; the clerical error was never officially corrected. Regardless of the spelling, it was this unusual piece of topography that drew Steven Spielberg to use the iconic landmark as the setting for his famous 1977 movie about extraterrestrials, Close Encounters Of The Third Kind.

For American Indians, Devils Tower is a sacred place known as Bear Lodge. According to Native American folklore, the vertical rock columns were carved by the claws of a giant bear. It was here that the Lakota tribe traditionally held a ceremony of fasting and renewal known as a sun dance; tribes continue the practice to this day.

Sun dancers are the reason the nearby town is called Sundance. Harry Longabaugh spent 18 months in jail there after stealing a horse, a saddle, and a gun, and he earned the infamous nickname Sundance Kid. Nowadays visitors can take selfies with a statue of the legendary outlaw. 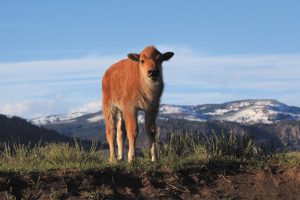 Adobe Town — which isn’t a town at all — was a hideout for outlaw Butch Cassidy, the Sundance Kid, and their gang. The “town” is actually 180,910 acres of desert wilderness with thousand-foot cliffs and a labyrinth of pinnacles. One section is known as The Haystacks. But there’s no hay, just rugged badlands. After their daring Tipton Train Robbery on August 29, 1900, the outlaws escaped by riding fresh horses they had hidden there. Today, Wyoming’s largest herd of wild horses lives in Adobe Town, running freely in the Red Desert.

This region wasn’t always a desert. Millions of years ago, it boasted a subtropical climate similar to today’s Everglades. Primitive horses ran alongside ancient animals, including woolly rhinoceroses and giant ground sloths. Adobe Town contains an abundance of fossils from these creatures, which makes it one of the world’s most important paleontological sites. 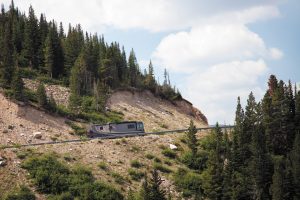 Part of the Beartooth Highway winds through Wyoming and leads to Yellowstone National Park.

Wyoming boasts a plethora of fossils; there’s even a national monument dedicated to them, Fossil Butte. It contains some of the world’s best-preserved fossils, including an astounding 27 species of fish, which earned it the title “America’s Aquarium in Stone.” The nearby town of Kemmerer is known as the Fossil Fish Capital of the World.

Did you know that many of the large dinosaur specimens showcased in museums worldwide were found in Wyoming? The University of Wyoming exhibits a 75-foot-long Apatosaurus skeleton, representing one of the largest animals to ever roam the Earth, along with “Big Al,” the most complete Allosaurus fossil ever found. Wyoming is also home to the world’s largest mounted Columbian mammoth, and it even claims an official state dinosaur, the Triceratops. And believe it or not, a structure touted as “the world’s oldest building” is in the state, too. Known as Fossil Cabin, it’s made of masonry and numerous species of dinosaur bones. 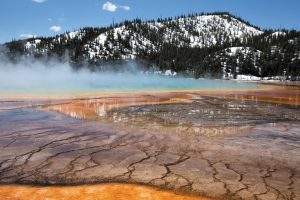 Hot springs can be viewed near Thermopolis and elsewhere.

You’ll find Fossil Cabin at mile marker 279 along U.S. Highway 30, otherwise known as the Old Lincoln Highway. Named in honor of President Abraham Lincoln, this 3,000-plus-mile route was the first transcontinental road for autos in the United States. And its highest point is in Wyoming, more than 8,000 feet above sea level, on top of Sherman Hill. The Abraham Lincoln Memorial Monument, a 13½-foot bronze bust, features the largest bronze head in the country. Cast in 30 pieces, the head is bolted together and sits on a hollow concrete pillar filled with ladders and lightning rods. It once marked the highest point on the highway but was later moved to the Summit rest area on Interstate 80.

As an RVer, be glad the Lincoln Highway is vastly improved since it opened in 1913. Would you believe highway maintenance was performed by volunteers in each county who took care of their section of the road? Imagine the road conditions when Wyoming’s Governor Joseph M. Carey called for all able-bodied men in the state to do road work on September 27, 1913. 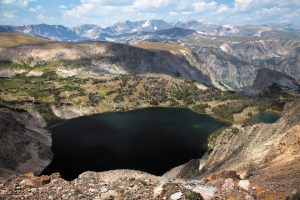 Another famous road, the Oregon Trail, is remembered in part along the Oregon Trail Historic Byway, a 57-mile route that begins on U.S. Highway 26 at the Wyoming/Nebraska border. This first road west was a covered-wagon trail primarily composed of connecting travel routes of American Indians, mountain men, and trappers. Impressive wagon wheel ruts from these mid-1800s travelers can still be seen. Long after the covered wagons passed, tourists driving Model Ts during the 1920s motored along U.S. Highway 26 and nicknamed the route “Yellowstone Highway.” They marked the path with yellow-painted stones.

The world’s first national park, Yellowstone, protects more than half of the world’s hydrothermal features. Considered a supervolcano, it is actually one of the world’s largest active volcanoes. Yellowstone has the world’s largest collection of geysers, including Steamboat, the world’s tallest active geyser, which can erupt more than 300 feet skyward. Old Faithful, perhaps the park’s most famous geyser, is known for its frequent eruptions, around 17 times a day. The park has other extraordinary features as well, including the largest high-elevation lake in North America. Yellowstone Lake sits at 7,733 feet above sea level and is so big, it creates its own weather! A lakeshore geyser named Fishing Cone got its name when visitors caught trout in the lake and cooked them in the geyser’s steamy water. 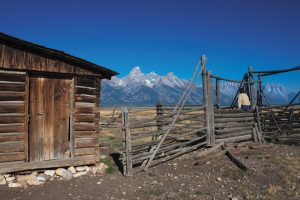 The “world’s largest mineral hot springs” aren’t in Yellowstone. They are located just outside the park in the appropriately named town of Thermopolis, which is Greek for “Hot City.” The healing waters of Big Horn Hot Spring are within the most-visited state park in Wyoming, Hot Springs State Park. Thermopolis was once part of the Wind River Reservation. When the buffalo herds were gone, the Eastern Shoshone and Northern Arapaho agreed to sell the land for cattle, rations, and cash to buy food. You can thank the Eastern Shoshone’s Chief Washakie for placing a condition on the sale: People must always be allowed in the hot springs for free.

Native Americans were recruited by William “Buffalo Bill” Cody as “genuine characters” for his Wild West show. He took his show to Europe, achieving international fame. On May 9, 1887, he performed in London for Queen Victoria, who presented him with a backbar made of cherrywood. Today the exquisite bar is a prominent feature in the Irma Hotel in Cody, Wyoming. The town has several ties to Colonel Cody. At the time Buffalo Bill Dam was completed, it was the highest dam in the world at 325 feet. The Buffalo Bill Center Of The West is referred to as the “Smithsonian of the West,” and claims the most comprehensive collection of American firearms in the world among its more than 37,000 artifacts. Cody itself is known as the “Rodeo Capital of the World.” 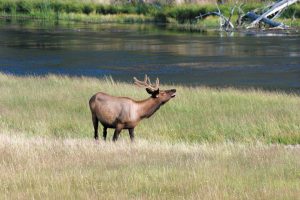 Elk roam in the summer months.

But it’s the capital city, Cheyenne, that hosts the world’s largest outdoor rodeo, Cheyenne Frontier Days, which is called the “Daddy of ’em All.” Cheyenne is also home to a “Big Boy” — Union Pacific Railroad’s “Old Number 4004,” the world’s largest steam locomotive, designed to pull a 3,600-ton train over steep grades. Here’s an astounding “world” tidbit about Cheyenne: It was once the wealthiest city per capita in the world. Can you guess why? Two reasons: the Gold Rush and the cattle industry.

Yet, it’s Gillette, site of FMCA’s 103rd International Convention & RV Expo this July, that once held the reputation as Wyoming’s wildest cow town; it boasted a whopping 20 saloons. Today, Gillette is the county seat of Campbell County, known as the Energy Capital of the United States. Wyoming accounts for nearly 40 percent of the coal production in the United States each year. Used for steam to generate electricity at power plants, the coal is mined at an astounding rate of 12 tons per second in the Powder River Basin coal field, considered the most prolific in the world. 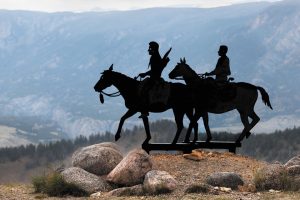 Have you noticed how many fun Wyoming facts claim the state as the first, largest, or most in the world? Extraordinary! And that brings us back to daredevil George Hopkins. Remember him? He descended Devils Tower without first climbing it. Did you guess how he did it? He made a bulls-eye parachute landing on top of the tower in October 1941. Why? To win a $50 bet with a friend.

Wyoming truly is like no place else on Earth.

What’s In A Name?

You may know that Wyoming’s nickname is the “Equality State,” because it was the first state to grant women the right to vote. But Wyoming also claims these milestones:

The U.S. Congress threatened to refuse statehood to Wyoming because of the women’s vote. The Wyoming territorial legislature responded with a telegram to Congress stating, “We will remain out of the Union one hundred years rather than come in without the women.”

Wyoming is the only state that never repealed its women’s suffrage statute. It became the 44th state in the Union in 1890, allowing its women to vote 50 years ahead of the rest of the nation’s women.

The Spirit Of Wyoming Is Calling!

Tacoma, Outside And In