KZ Recreational Vehicles celebrates its golden anniversary with a special features package on all 2022 Sportsmen travel trailers and fifth-wheels, including this budget-friendly model.

In 2022, KZ Recreational Vehicles will recognize a milestone: 50 years in business. But the celebrating already has begun with the rollout of its 2022 Sportsmen travel trailers and fifth wheels, which come with a special 50th anniversary package as standard equipment.

Sportsmen SE travel trailer floor plans range from 26 feet 5 inches to 37 feet 3 inches long, with unloaded vehicle weights (UVW) between 4,860 and 7,270 pounds; the 251RSSE profiled in this article is 29 feet 7 inches long and has a UVW of 5,330 pounds. It features two entry doors, a front bedroom, a full-width bath, a rear living area, and one slideout.

To further shield the RV from weather extremes, KZ includes its Climate Package as part of the 50th Anniversary Package. It features a fully enclosed and heated underbelly to protect tanks and pipes; insulation factors have been increased to R-9 for the sidewalls, R-20 for the roof, and R-24 for the floor.

Solar roof prep also is part of the 50th Anniversary Package. It sets the scene for RVers to add the optional Off-Grid Package, which features Xantrex products. In addition to one 110-watt roof-mounted flexible solar panel, components include a 1,200-watt pure sine wave inverter and a 30-amp MPPT charge controller with an MPPT remote panel. The charge controller is designed to charge either lithium-ion or lead-acid batteries, and it can accommodate additional solar panels (up to a total of 880 watts) if desired. This upgrade may interest RVers who enjoy remote, no-hookup camping, as it keeps the batteries charged and powers a variety of electronics and appliances. 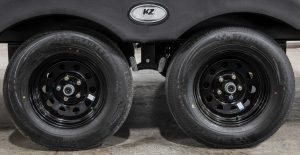 The RV rides on black steel wheels. A diamond-plate rock guard helps to repel road debris. Stabilizing jacks are standard, as is backup camera prep. The rear bumper contains dedicated storage for the sewer hose. The Sportsmen SE comes standard with black tank flush. In the front, twin 20-pound propane cylinders are secured and protected by a cover.

The RV Airflow system is another “gift” in the 50th Anniversary Package. This system incorporates a special module that enables all of the airflow to be captured and directed into the ductwork. It is said to increase airflow in the A/C system by approximately 40 percent.

Entry doors and baggage compartment doors are radiused; the entry doors have friction hinges that prevent them from swinging open with a gust of wind and are paired with a set of triple entry steps. A lighted power awning covers both of these doors, and a drip rail with spouts is included. The unit features tinted windows. 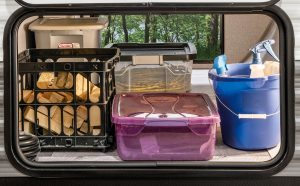 Like most Sportsmen SE floor plans, the 251RSSE incorporates a substantial pass-through storage compartment, with plenty of room to stow cargo. Doors with magnetic catches provide access to this lighted compartment from both sides of the RV.

When relaxing outdoors, families can listen to music through the exterior speakers, which are complemented by LED lighting. Four-footed passengers needn’t stay stranded inside, thanks to the Leash Latch, which also includes a beverage opener. A standard exterior shower has both hot and cold faucets. And although it is not available on this floor plan, some Sportsmen SE units can be equipped with an optional outdoor kitchen. 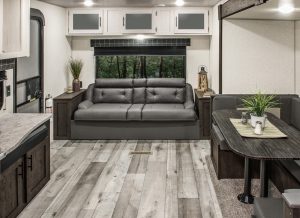 Stepping into the 251RSSE through the rear entry door, one lands in the living and galley areas. A 70-inch jackknife sofa with a center console rests against the back wall and is flanked by small sofa tables; options include theater seating or a tri-fold sofa. On the street side, in the slideout, an 80-inch U-shaped dinette provides ample room around the table and also converts to sleeping space. The cushions conceal storage cabinets below. A 10-cubic-foot 12-volt refrigerator shares the slideout space. If RVers prefer, they can opt for a 7-cubic-foot propane-electric fridge instead.

The 251RSSE’s galley is configured in an L shape and has a fair amount of counter space in a small area. Cooking aids include a three-burner cooktop with cover, a range hood with a 12-volt light and an exhaust fan, a conventional oven, and a microwave. The roomy stainless-steel farmhouse sink comes with a black metal faucet and a cover that matches the countertop. Storage is plentiful here and elsewhere — including room for a trash can. 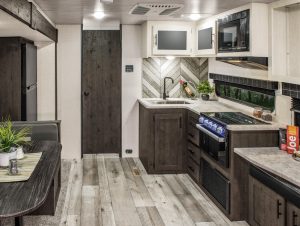 The L-shaped galley includes a cooktop, microwave, and regular oven.

Adjacent to the galley is the entertainment center, with a long counter that can be used as additional work-space for cooking or for entertaining. Overhead space has been allocated for installing a TV, which is viewable from the dinette and sofa. A sound bar and cabinet are below.

The bathroom is roomy and, as noted, stretches across the width of the RV. Its 40-inch shower comes with a surround. A vanity and built-in shelves are placed at angles on the opposite wall. This area also includes a foot-flush toilet and a power vent.

From the bath area, sliding doors open into the 251RSSE’s front bedroom. (The second entry door opens into here also.) Small shelves behind the queen-size bed are right-sized to hold eyeglasses or smartphones. Shirt-length wardrobes flank the bed, and a shelf stretches between them. A wall mount can accommodate a second TV. And, as elsewhere in the Sportsmen SE, the bedroom has a USB charging port and a 120-volt outlet.

The 2022 Sportsmen SE 251RSSE is available at a base suggested retail price of $35,033. The 50th Anniversary Package is included in the price, along with a host of other packages and features. 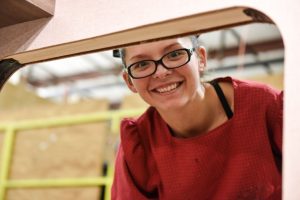 In 1985, KZ started building “stick and tin” fifth-wheels, and in 1992, the first laminated fifth-wheel. Toy hauler production commenced in 1999. 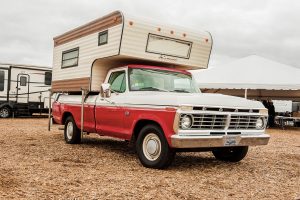 Fueled by those early years of hopes and dreams, trial and error, KZ Recreational Vehicles continued to expand. In 2022, it observes its 50th anniversary.

Today, the company remains headquartered in Shipshewana on a campus with 530,000 square feet of manufacturing space. Its 600-plus employees build travel trailers, fifth-wheels, and toy haulers; models include Connect, Durango, Escape, Sportsmen, Sportster, and Venom. 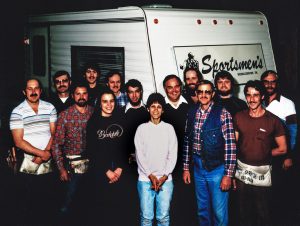 A subsidiary, Venture RV, was created in 2012 and produces towable RVs under the Sonic, Stratus, and SportTrek names.

In 2013, the company entered the global market when it partnered with a Chinese manufacturer. In 2014, KZ was acquired by Thor Industries. In 2021, KZ purchased 30 additional acres to address further expansion.

Despite this evolution, basic philosophies continue to drive the 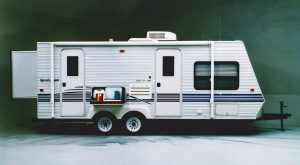 The company patented a rear-slide mechanism in 2001, shown here on a Sportsmen Ultralite travel trailer.

business. Employees are considered vital to its success, guided by family values that resonate throughout the company. “Our foundation of honesty and integrity impacts the lives of our families, community, and business partners,” a KZ representative noted.

Attention to detail is emphasized in each unit. Employees are encouraged to build the RVs they would want their own families to use. And even as demand for RVs has skyrocketed, the company has maintained “ironclad quality,” the KZ official added.

As KZ’s website notes, “People make a difference, and at KZ, our employees make all the difference in the world.”

Wander And Wonder In Kansas