Understanding what triggers a dog’s anxiety can help the owner devise a positive approach to RV travel.

Tips from an RV owner who eased her fearful and aggressive dog into a life of full-time travel.

I adopted a dog just one month before I took off on my full-time RV adventure. For more than 20 years, I had been a renter, with a work schedule that didn’t allow for a dog. But now I would be free to make my own rules, and a dog would be a great companion and a good protector. I was very excited, both at the prospect of my new lifestyle and for the companionship and joy a puppy would bring.

I adopted an 8-month-old standard Xoloitzcuintli (pronounced “show-low-itz-QUEENT-lee”) puppy from an online classifieds site. A “Xolo” is also known as a Mexican hairless. I owned this rare breed many years before, and it seemed meant to be to find my new pup at the exact right time.

I was told he was put up for adoption because the landlord said he had to go. The truth was, he inadvertently had been abused by children playing much too roughly with him. While he never showed aggression with me, he was a different dog around strangers. Also, he was extremely fearful during our walks. For instance, he had a weird paranoia about blue plastic tarps and anything under a cover, such as a motorcycle. Not only was I on an RV lifestyle learning curve, but I had a dog that needed emotional help.

It would be another month before I hit the road driving, so I used this time to prepare my new traveling companion as best I could. Above all, I understood that a life of constant change could be stressful for my fearful dog. There would be new places, new sounds, new smells, strange people, and strange dogs. As it was, my fur baby already had a case of sensory overload. I could see that excess stimuli triggered his fight-or-flight response. Unfortunately, when it came to other dogs and people, it was more fight that flight.

I started by finding simple solutions to help my dog live the RV life with as little stress and anxiety as possible.

First, I removed an extra chair from the motorhome to make room for a dog crate. This provided my pup with a safe place to travel. Likewise, it allowed me to drive safely, without the distraction of a needy, fearful dog roaming the coach.

Second, I downloaded sound therapy music, reputed to calm a dog’s nerves. While I was driving, or at other times when my dog became agitated, I played this calming, classical piano music. It did not affect my alertness while driving, but it did calm him down. 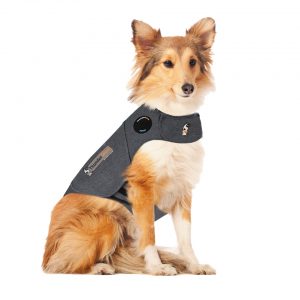 The ThunderShirt provides gentle reassurance when a dog is exposed to loud noises and other stressors.

Third, I bought a ThunderShirt for him. This tight-fitting garment applies a constant, gentle pressure. It’s like a hug. It is designed to decrease a dog’s fear and anxiety created by stressors such as fireworks, thunderstorms, traveling, and separation anxiety. It’s not a medication, so your dog remains drug-free. My boy wore his almost around the clock for the first few weeks. (Models for cats are also available.)

Next, I made arrangements to meet with a dog trainer at our first month-long stop. In the meantime, on the road, I found that traveling with my dog was a great opportunity to increase his confidence. While nervous, he seemed to enjoy the natural environments we camped in. Once we were out of the city and in calmer, more rural environments, he settled down. I quickly realized that city life had overloaded his senses. Noises, movements, and people coming out of nowhere, constantly surprising him, put him on guard and triggered his aggression.

The RV community helped a lot also. In my experience, the average RVer is a calm, mature dog-lover. Exposed to friendly, nonthreatening people, my pup began to rethink his relationship to strangers. My advice: Remember to let your dog make the first move with new people. Always reward him for his courage in new situations. Furthermore, never keep your dog in a situation that really frightens him. If your dog becomes very agitated, just leave.

Once we reached our destination, we paid a visit to the vet. It’s important to ensure that a dog’s issues are not health related. My boy had a bad case of worms but was in good health otherwise. If your dog has chronic pain, such as arthritis, she’s more apt to display fearful, aggressive behavior.

The trainer we worked with was a wonderful woman, who eventually became “second mom.” The first thing we learned was that every dog has something that motivates him. Discovering what motivates yours can help you through behavioral issues. Does your dog love to play ball? Does she have a special toy? Is your dog food motivated? Does he live for your love and approval? Find the special thing you can use as a reward.

Knowing what motivates your dog is key to positive training. It’s important to use positive reinforcement. Using positive training methods increases the bond between you and your dog. Furthermore, it builds mutual respect and trust. For example, I learned that throwing a treat onto a blue tarp, or near a motorcycle, encouraged my dog to overcome that fear. If he was fearful of something on our walks, I’d throw a treat ahead to keep him moving. I never left home without tasty little treats! Eventually, his confidence increased, and I needed to use treats less and less.

I also learned to walk him early and late. This ensured we didn’t meet too many other people out walking their dogs. At the same time, we made regular trips to a nearby dog park to work on his socialization. I discovered one of his fear aggression triggers: bigger dogs. He has since made friends with bigger dogs, but it takes longer, and some gentle encouragement. Remember, when your dog becomes fearful, remove him or her from the situation.

Always make sure your dog knows you’re his protector, and that his home is a safe space. Allow your dog to calm down following stressful situations. A calm voice, along with petting, will soothe away the cortisol that causes prolonged stress. While you don’t want to reinforce needy behavior, it’s important to respond with compassion and kindness when your dog really needs it.

One issue we encounter in RV parks is “nuisance barking.” My dog is very territorial and will try to drive away anyone walking by with “vicious” barking. If your dog is a nuisance barker, rather than immediately reprimanding her, acknowledge what she is barking at. In your dog’s mind, she’s just doing her job. Take a look at what she has spotted, and say something like, “I see that! What are they doing? I see that. Now calm down. It’s okay.” By acknowledging what she sees, you release her from watchdog duty.

Of course, this won’t work with every dog. Small dogs seem especially prone to nuisance barking. If your “little yapper” just won’t stop, you may have to restrict his access to windows. Also, playing dog “sound therapy” music can help. It will not only soothe your dog’s nerves, but it also may mask any triggering sounds outside.

The beauty of the RV lifestyle is that it can give you more control of your environment. If a particular place is especially triggering to your dog, moving is a simpler option than it is when a sticks-and-bricks home is involved. If people walking by your rig triggers your dog to act out, request a campground site in an out-of-the-way corner.

Calmer On The Road

As I write this, we’ve been full-time RVing for five years. I’d say my pooch is 80 percent over his “issues.” We spend much of our time boondocking or camping in state parks. Both my dog and I appreciate the wide-open spaces and the tranquil beauty of nature. He is much calmer and happier away from the city bustle. But he still needs supervision, and he needs to “approve” new people or dogs. He keeps his interactions short, but now he wants to go out and meet people. He wants to check out the neighbors.

Above all, I know his triggers. He doesn’t like small children. People with walking sticks spell danger to him. He will chase bicycles and cars. He may pick a fight with a bigger dog. Finally, there are some people he simply does not like, for no discernible reason. In other words, he’s doing his job; I protect him, and he protects me.

While he’s still prone to defensive behavior, my dog’s aggressive behavior has greatly diminished. The combination of gentle, positive training and reinforcement, and the RV lifestyle, turned him around. I sometimes imagine what he would be like if someone else had adopted him. Someone with rowdy kids. Someone with volatile relationships. Someplace where he was left alone all day, with too much scary stimuli. He enjoys a lifestyle that includes living outside of the big city, in rural towns, as well as out in nature. I do believe finding him was meant to be. He was destined to be a boondocking RV dog, living the dream!

RVing With The “BIG” Dog

A Home Office — On The Road