When the authors downsized their motorhome, they also needed a smaller towed car, and the Smart car fit the bill.

A look at preparing and towing this cute, economical car four wheels down.

When we downsized our motorhome, we also had to look for a smaller towed vehicle. Our new 24-foot motorhome is built on a Sprinter chassis and has a 3,500-pound towing capacity. Not many cars approved by the manufacturers for four-wheels-down towing weigh less than 3,500 pounds.

A friend of ours never buys anything without researching it to the point of exhaustion. His research saved us time when it came to making a decision. He owns a Smart car. It weighs in at approximately 1,800 pounds, gets good gas mileage, has many safety features, and the gasoline model is suitable to tow four wheels down. So, we bought a Smart car.

Next, we needed a tow bar to connect the Smart car to the motorhome. We like a tow bar that stows on the rear of the motorhome when not connected to the towed vehicle. This allows the visible front portion of the bracket to be removed from the front of the car, eliminating extra weight on the Smart car when we are unhitched and out touring and shopping. We decided that the Roadmaster Falcon2 tow bar was the right choice for the job.

Installing this tow bar to a Smart car involves 40 steps. The Roadmaster installation manual provided detailed information and photos. It suggested that the installation of most mounting brackets would require moderate mechanical aptitude and skill. However, it became obvious to us that if the person performing the installation was not meticulous about details and able to follow each step in the proper order, we would run the risk of not towing our Smart car safely or securely. We were excited when we were permitted to watch and photograph the entire procedure. And we were relieved when our installer studied every page of the instructions before he began the job. We were ecstatic when our car looked exactly like the photos of the Smart car in the Roadmaster manual during each step of the procedure. 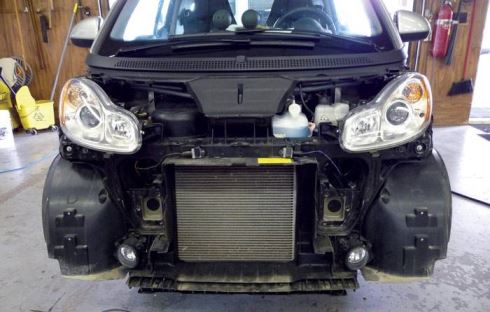 For an instant we were traumatized when we saw various parts of our car strewn about the service bay floor. We were reassured to see nuts, bolts, clamps, drill bits, pliers, pipe spacers, and a drill neatly arranged on the workbench. Throughout the process of removing the hood, antenna, fascia, wheels, and rocker panels, the appearance of our little car changed into something resembling a dune buggy. Once the installer reached step 19 in the instruction manual, the teardown portion of the job was finished. It was time to begin installing the hitch. At step 25, the installer trimmed the air deflector on each side of the car using the red lines on the figure in the manual as a guide. 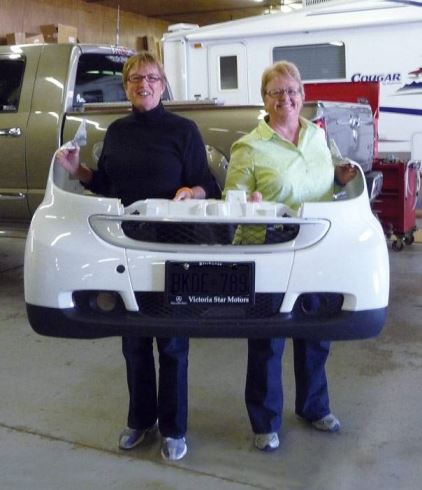 After a well-deserved lunch break, the service technician drilled holes in the frame rail, attached the bolts through the braces, and trimmed the grille to fit over the visible front portions of the bracket. By step 35, the project was in the home stretch. The fascia, wheels, air bag, and air bag sensors were put back into position. Bolts were torqued to the requirements in the instruction manual. We breathed a sigh of relief when we noted that no leftover parts remained on the workbench or the floor. The installer handed us a well-used copy of the manual, and we were on our way.

Our next adventure was to see how well the Smart car behaved as a towed vehicle behind our motorhome. The Smart car manual recommends having an on-off switch installed on the battery terminal when the vehicle is to be towed four wheels down. We have not done this and have not found it necessary. Just to be on the safe side, when we stop for the night, we put the car in park, remove the key from the ignition, and lock the car. We attach the Smart car key to the steering wheel of the motorhome as a reminder to put the key back in the Smart car and to shift the car to neutral before starting down the road. And we never tow the Smart car for more than two days without starting the engine.

Once while pulling left out of a gas station across traffic and then immediately right to enter a freeway ramp, we heard a thumping sound. Looking at the car through the side mirrors, we could see that the front tires on the car made the first turn but couldn’t get back to center position quickly enough to make the second. As the coach continued to pull the car in the new direction, the front wheels on the car jerked from side to side trying to determine which way to go. Our solution from that uncomfortable moment on was make slow, wide turns, allowing the Smart car wheels time to realign back to center.

The Smart car meets all our expectations. We have towed it behind the motorhome from Florida to California to British Columbia and Newfoundland. We can hitch the car to the motorhome in a matter of minutes, and there are no fuses to pull. The car’s interior is deceivingly large with lots of legroom, and the seats sit up high as in an SUV, so getting in and out of the vehicle is easy for the driver and passenger. Storage in the back is ample for shopping when the motorhome is parked. When we’re on the road, the cuteness and size of the Smart car elicits the same responses as puppies and babies. Complete strangers smile and wave. We have even caught people petting it on those rare occasions that we need to stop and fill it up at a gas station.

If a motorhome-mounted tow bar is not level when connecting the two vehicles for towing, the upward or downward slope from the motorhome to the towed vehicle puts undue strain on the entire towing system. If the tow bar slope is not within the “safe zone,” it will result in wear and tear on the tow bar and brackets and the towed vehicle’s suspension and frame, which eventually can lead to failure of the towing system. To determine whether the tow bar from the Smart car — or any towed vehicle — to the motorhome is within the safe zone, the RV and towed vehicle should be parked on level ground. Measure the distance from the center of the motorhome receiver down to the ground. Measure the distance from the center of one of the base pins on the towed vehicle down to the ground. To be within the safe zone, the two measurements cannot be more than 3 inches apart. Hitch accessories that can raise or lower the receiver, depending upon the model, are available.

About The Authors
Phyllis Hinz and Lamont Mackay — also known as The Cooking Ladies — are cookbook authors, travel writers, restaurant consultants, and RV enthusiasts. They are from Ontario and spent 20 years in the restaurant business before selling their homes, businesses, and most of their belongings in order to satisfy their appetite for adventure and the pursuit of regional cuisines. For more information, visit www.thecookingladies.com or send an e-mail to info@thecookingladies.com.