Your "dream adventure" may become reality through a Get Out There grant from KOA.

The National Park Service has increased the entrance fees to most of the national parks that charge admission. Most parks planned to implement the increase on June 1, 2018.

The park service said the increase is part of ongoing efforts to address aging park infrastructure and improve the visitor experience. The additional revenue is needed to help tackle $11.6 billion in deferred maintenance across the system’s 417 parks, historic and cultural sites, and monuments.

All of the revenue from the fee increases will remain in the park service, with at least 80 percent of the money staying in the park where it is collected, according to park service officials.

The price remains $80 for the America the Beautiful National Parks and the Federal Recreational Lands Annual Pass, as well as the Lifetime Senior Pass.

KOA Launches “Get Out There” Grants

A new grant program created by Kampgrounds of America is designed to encourage more people to get outdoors. The Get Out There grants are available to citizens of the United States and Canada, and provide funding for people to experience a special adventure of their own design.

Each applicant will be asked to describe their “dream adventure,” and include why they are deserving of a grant. It’s not required that the proposed adventure involve camping.

Grants can be awarded in any amount from $1,000 to $5,000 per person. For more information or to obtain an application, visit www.koa.com/grants. The application deadline is June 22, 2018.

Three members of the RV industry were appointed in March 2018 to the U.S. Department of the Interior’s newly established Outdoor Recreation Advisory Committee. They are Matt Miller, president of Newmar Corporation; Antonio Gonzalez, president and CEO of Taxa Outdoors; and Jim Rogers, past chairman and CEO of Kampgrounds of America.

The mission of the 15-person committee is to advise Interior Department officials on strategic public-private partnerships that can expand and improve infrastructure on and around federally managed public lands; improve visitor experiences; and create more opportunities for Americans to enjoy the outdoors.

In related news, U.S. Interior Secretary Ryan Zinke has signed two secretarial orders focused on recreation. One order directs certain Interior bureaus to create and deliver plans designed to develop or expand recreational opportunities on public lands and waterways. The other order establishes the position of senior national adviser to the secretary for recreation. 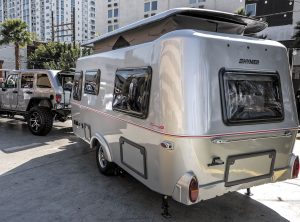 A pop-top roof is a distinctive feature of the Hymer Touring GT, an ultra-lightweight travel trailer.

Both travel trailers feature a pop-top roof, a king-size bed, and a full kitchen and bath. Each weighs less than 2,500 pounds. Both trailers have interior styling options available in light and dark cabinetry and fabrics, along with a couple of exterior color choices; the Hymer Touring GT exterior comes with a full or partial stainless look. Visit www.erwinhymergroupna.com for more information.

Maybe someday, motorhome owners will be able to pay for fuel using a nifty new feature being introduced by Chevrolet and Shell. Officials from those companies say they’ve launched the automotive industry’s first embedded, in-dash fuel payment feature. Drivers of eligible Chevrolet vehicles will be able to pay directly through the touchscreen in their vehicle when they fuel up at participating Shell stations, without swiping a credit card or using a mobile device. 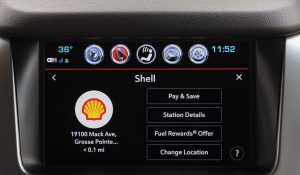 Chevrolet and Shell are rolling out the first embedded, in-dash fuel payment feature.

Embedded in-dash fueling is powered by the automotive industry’s Marketplace, a commerce platform for on-demand reservations and purchases of goods and services. Marketplace allows users to order food, make dinner reservations, find parking or hotels, and locate and pay for fuel at certain Shell stations.

In-dash payment at Shell stations is being tested in select markets. A General Motors spokesman said the company plans to make the in-dash fueling service available in more than 4 million Chevy, Buick, GMC, and Cadillac vehicles by the end of the year. He also said the service eventually will be available at more than 14,000 Shell stations across the United States. 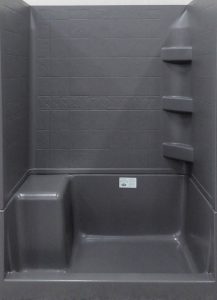 Duo-Form Plastics has launched a line of shower walls in a new color, storm gray.

Duo-Form Plastics, which has been building RV parts since 1968, has launched a new line of shower walls. The first product in the new line is offered in a new color: storm gray, which mirrors the increased popularity of this color in residential decor. The shower wall is available in various sizes with matching shower pans. For now, the product is available only to original-equipment manufacturers. Information: www.duoformplastics.com or (269) 663-8525.