Newmar Motorhome Featured At White House Made In America Event

The 45-foot London Aire was parked on the South Lawn of the White House for the event, which featured American-made products from companies representing all 50 states. Newmar is based in Nappanee, Indiana.

Vice President Pence stopped by the London Aire at the same time as Ben Carson, secretary of the Department of Housing and Urban Development. Later, President Trump boarded the motorhome and spoke with Mr. Miller and Mr. Bogan.
“President Trump asked some great questions, was extrem
ely friendly, and made us feel at ease as if we could visit for hours,” Mr. Miller said, according to RVIA’s “News & Insights” e-newsletter. “He asked about our customers, how many units we build, and shared nice comments about the RV throughout his visit.”

REV Group’s parts division, REV Parts LLC, expanded the breadth of its aftermarket products in the first half of 2018. Two of them involve the RV industry.

*REV Parts became the exclusive provider of TransCore’s newly introduced RV Toll Pass, which makes it possible for RVers to access 97 percent of major toll roads in the United States with a single toll transponder.

La Mesa RV in July 2018 celebrated the grand opening of its new RV showroom in West Sacramento, California, which the company said is the largest in the nation.

The showroom has more than 130,000 square feet of climate-controlled space. It houses an inventory that includes up to 350 new and used RVs. Bob Upton, president of La Mesa RV, said that with the new showroom open, the company has plans to enlarge its service facilities in nearby Davis, California. 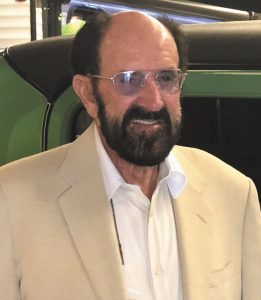 The namesake of Paul Evert’s RV Country has retired, and the successful West Coast RV dealership he built no longer carries his name. This past May, Mr. Evert received a send-off from past and present employees and customers at what is now RV Country.

The dealership is an FMCA commercial member and a longtime exhibitor at the association’s conventions. RV Country has multiple locations in five states.

Mr. Evert told RVBusiness.com that he initiated the removal of “Paul Evert” from the company name. “Things are in Curt’s hands now. He’s the man,” Mr. Evert said, referring to president Curt Curtis, who has been with the dealership since 1987.

Thousands of RVs from all the major manufacturers are expected at the 66th annual California RV Show, which will return to Fairplex in Pomona from October 5 to 14, 2018. The show will occupy nearly 1 million square feet of space and will include educational seminars, celebrity appearances, musical acts, and more.

This year’s theme centers on the legendary Route 66. The number of parking spaces will increase by 30 percent for this year’s show, according to the RV Industry Association, which produces the show. For more information, visit www.thebestrvshow.com. 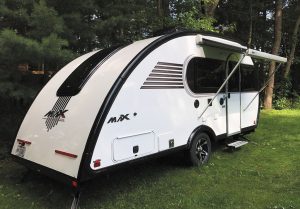 The 21-foot-long Little Guy Max sleeps three and offers a variety of amenities.

Little Guy Trailers has introduced Little Guy Max, a 3,140-pound teardrop-shaped travel trailer with a 6-foot-7-inch interior height. The trailer, which has an overall length of 21 feet, sleeps three.

Features of the interior include 100 percent maple hardwood cabinetry with dovetail joints; a queen-size master bed; a master bed entertainment center with a 24-inch TV and residential sound bar; a wet bath; a 24-inch TV on an electric lift for dinette/kitchen viewing; a 4-cubic-foot stainless-steel Dometic refrigerator; a dinette that converts to create a 32-inch-by-76-inch bed; and LED accent lighting throughout the kitchen and dinette.

The RV Industry Association (RVIA) board of directors in June 2018 approved the creation of the RV Technical Institute (RVTI) to address the industry’s shortage of trained technicians and to track the experience of RV customers. The RV Dealers Association (RVDA) endorsed the initiative. RVTI will establish a headquarters and training facility in the Elkhart, Indiana, area.

Initially, a $10 million seed fund will set up the RVTI training center and kick off a three-year implementation of the program. Half of the seed fund will come from RVIA; the other half will come from Go RVing, the industry’s national consumer outreach campaign, which is managed by RVIA and RVDA.

To achieve its goal of addressing RV owner satisfaction, RVTI will focus on reducing “repair event cycle times,” which are affected by factors such as technician training, lack of parts information, and inconsistent parts-stocking programs.

Work on a new technician training curriculum is under way. The goal is for beta testing of the curriculum to begin in November.

Plans call for newly recruited technicians to attend a “boot camp” at RVTI and then to be placed at partnering RV dealerships and service facilities. RVTI also will offer training and an accreditation for existing RV service technicians.

The goal is to have RVTI’s leader in place by January 1, 2019. To assist with the process, an executive recruitment firm has been hired.

On a related note, RVTI will host the second annual Top Tech Challenge on March 13, 2019, at the Salt Palace Convention Center in Salt Lake City, Utah. Held during a new industry event, RVX: The RV Experience, the competition will highlight the importance of RV technicians to the industry. Eight service techs will complete for the title of Top Tech.

Entegra Coach partnered with Spartan to produce the foundation for the Reatta.

The Reatta, a Type A motorhome, is built on Spartan’s newest K1 360 raised-rail chassis and is equipped with a Cummins 360-horsepower diesel engine. Other chassis features include independent front suspension; Bilstein 46-millimeter shocks; Spartan’s side-mounted service center; and a 10,000-pound towing capacity.

There is a choice of three floor plans and two interior designs for this motorhome. Other features include solid hardwood cabinets and fascias; a residential refrigerator; an induction cooktop; solid-surface countertops; hand-laid polished tile flooring; and LED televisions in the living room, bedroom, and on the exterior.