Three Men Who Made Medora

Medora, North Dakota, sits in a land of natural and man-made attractions.

A French marquis, a future president, and a man who sold bubble bath are credited with making this North Dakota town what it is today.

Medora, North Dakota, sits in a land of natural and human-made attractions. It is that place you may never have heard of and the one you will want to return to time and again. If seeing dramatic Western panoramas, historical museums, and delightful entertainment fill your to-do list, Medora is a destination for you.

Medora was named for a woman, but three men put it on the map. The first was Antoine de Vallombrosa, the Marquis de Mores, who founded Medora. Theodore Roosevelt put his stamp of approval on the land, too. Businessman Harold Schafer enhanced it. 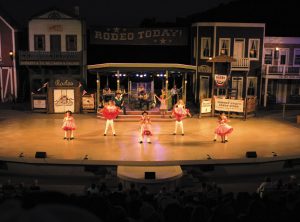 North Dakota’s patriotic ode to Theodore Roosevelt is presented via dance and song in the Medora Musical.

In 1883 the Marquis de Mores moved to the Dakota Territory, where he bought acreage along the east side of the Little Missouri River. To him, the North Dakota Badlands region was ripe for profit. One could raise cattle, start a packing plant, and compete with the meat-packing industry of Chicago. Once he built a home and ranch, he founded the town and named it for his wife, Medora Marie von Hoffman. She spoke seven languages; was an artist; and had gained renown for her equestrian and hunting skills.

Chateau de Mores was their summer home, and a popular destination for their East Coast friends. It was considered rustic by the standards of royalty, but the 26-room wood-frame house was lavish for an area where sod and logs were the primary building materials.

Unfortunately, the couple’s ranch life was short-lived. In 1886, after several setbacks, the Marquis’ businesses failed, and he and Medora left town. In 1896, just shy of his 38th birthday, the Marquis was killed while in northern Africa. Medora visited the area for the last time in 1903; she died in 1921. Her eldest son later donated the home and land to North Dakota for the enjoyment of the public. 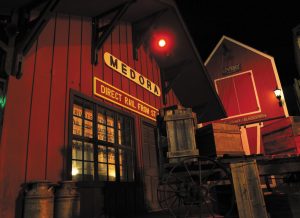 When you visit, you’ll see how the aristocrats lived on the rugged frontier of the 1880s. A guided tour of the house at Chateau de Mores State Historic Site also includes Chimney Park and de Mores Memorial Park. The home contains original items and period furniture.

Near the house, an interpretive center recalls the Marquis’ businesses, which included a stagecoach line, the beef packing plant, and refrigerated railroad cars, with artifacts from each. Also nearby, at Chimney Park, stands a native-clay brick tower, the only structure remaining from the days when the Marquis tried to join the competitive meat-packing industry. The park is a lovely place for a picnic.

The porch of the Chateau is the scene for readings of real-life letters, diaries, and other documents penned by local residents from days gone by. Three times a day on Saturdays and Sundays, from June through August, this free program is presented, based on writings collected by the state historical society. Another way to get a closer feel for the era is to take a 2-mile carriage ride through the Badlands. And, in downtown Medora, visit a statue of the Marquis at Mores Memorial Park.

Around the same time the Marquis was establishing his businesses, the most famous person to visit the area came for the saddest of reasons. Future U.S. President Theodore Roosevelt’s mother and wife both died on Valentine’s Day, 1884. Seeking a place to grieve and heal, he traveled later that year to the Dakota Badlands. On Chimney Butte Ranch (also called the Maltese Cross Ranch), which he eventually purchased, he could put aside his sorrow and work as a cowboy on land he loved. Roosevelt became acquainted with the Marquis and visited the Chateau occasionally.

The Badlands’ rugged beauty inspired and healed Theodore Roosevelt. “I have always said I would not have been president had it not been for my experience in North Dakota,” he wrote.

Today Medora is located near the southern entry to Theodore Roosevelt National Park, the United States’ only national park named after a person. Visitors to Medora use the town as their home base for exploring the beautiful Badlands and all the park has to offer.

Harold Schafer, a local businessman, was the third man to leave his mark on Medora. He is called the father of modern Medora. In his own words: “My obligation today is to see that Medora’s greatness can be carried on after my lifetime, that its future can be even better than the past.” He was responsible for restoring much of the town and received numerous accolades and awards for his work.

Schafer started the Gold Seal Company, making and selling floor wax, in the early 1940s. The company’s Glass Wax made it successful. Other products added to the profits: Mr. Bubble bubble bath and Snowy Bleach. In the 1960s Schafer bought an old store and old hotel in Medora, and renovated them. More renovations followed. When he sold his company in 1986, he dedicated his wealth and time to continue supporting preservation through the Theodore Roosevelt Medora Foundation.

Dedicated to his memory is the Harold Schafer Heritage Center, with displays of his products and vintage television commercials touting them. Harold’s wife, Sheila, collected art, so it, too, is on display. It’s a great (and free-admission) salute to the man who is said to have literally saved the town. 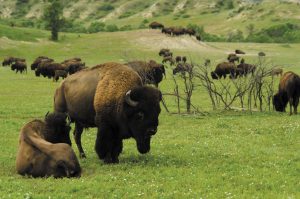 Theodore Roosevelt called the presidency “a bully pulpit,” meaning it was an advantageous position from which to voice one’s views. Medora named its municipal links the Bully Pulpit Golf Course. Roosevelt’s conservation commitment influenced the design and maintenance of the course. It is in a “bully” position along the Little Missouri River, about 3 miles south of town, at the foot of the Badlands. Michael Hurdzan, course architect, describes it as “the best course without an ocean view.” The unparalleled Badlands Holes 14, 15, and 16 lie along the gorge, providing magnificent vistas.

A free museum in the clubhouse shows a 45-minute video of Roosevelt’s role in the building of the Panama Canal.

Those into miniature golf will want to head to Medora Mini Golf near the Badlands Hotel. This spot has Western-themed hazards. Take it easy on the first hole, if you have young children playing. A hole-in-one nets a free ice cream cone to players age 6 or under.

Bicyclists will want to try all or some of the 96-mile Maah Daah Hey Trail. This challenging route was part of the Mandan Indian land and wends through spectacular geological formations. Peaks, valleys, rolling prairie, rivers . . . it has the Badlands all over it. It is said to be the longest single track mountain biking trail in America, and is also open to hikers and horseback riders. Sully Creek State Park Campground and Forest Service campsites are near the trail.

Though he neither resided in nor helped develop Medora, another man left a historical mark on the area: George Armstrong Custer, lieutenant colonel of the 7th Cavalry Regiment. All seven locations along the Trail of Custer are in or within 40 minutes of Medora, including a camp located on what is now the Bully Pulpit Golf Course. To find the route of the Custer trail, visit www.ndtourism.com/best-places/7-places-follow-trail-custer.

More Medora sights await. One is the North Dakota Cowboy Hall of Fame, which includes the Center of Western Heritage & Cultures: American Indian, Ranching, and Rodeo. Permanent and changing exhibits tell of the peoples who settled in and developed this land. This story centers on those who rode the horses, the only means of transportation and recreation in the settling of the area.

Next, we move on to see a Texas longhorn named Lloyd — the taxidermy version, that is — who greets visitors at the Billings County Courthouse Museum. The courthouse, built more than 100 years ago, is listed on the National Register of Historic Places. The building has a restored jail and courtroom, displays of historic firearms, and a large barbed-wire collection.

Three men put Medora on the map, but the spectacular “Medora Musical” brings in the tourists. In an evening full of singing and dancing, the story of the town is told, one exceptional scene at a time.

The program is presented outdoors at the Burning Hills Amphitheatre. It weaves the story of Teddy Roosevelt with the history of the West and the development of Medora. Professional actors and dancers from the United States and beyond are part of the cast. The Medora Musical website boasts that more than 4 million have seen the show since its 1965 inception.

One might as well join in and have some of that tasty steak served before the show at Pitchfork Steak Fondue, located on the theater grounds. The meal includes side dishes, dessert, and a beverage. Entrée alternatives are chicken, ribs, or bison.

In addition to the musical, local events are presented throughout the summer. You may find cowboy poetry readings, barrel racing, or an antique car show going on when you visit. Local shops honor Theodore Roosevelt with an inventory of Teddy bears and other Roosevelt-themed items, as well as an outstanding collection of American Indian arts. Restaurants offer Western cuisine and other choices.

You’ll find that Medora is a bully place to enjoy a wonderful time before or after FMCA’s 100th International Convention, in Minot, North Dakota, and one you will want to return to on another excursion.

Details about the sites mentioned in this story may be obtained from:

This list may not be complete, so please check your campground app or directory, and the FMCA RV Marketplace at https://fmcarvmarketplace.com

How We Stayed Along The Oregon Coast For...

Camping In The Cold