Winnebago Industries in March 2019 announced a multiyear partnership with the National Park Foundation in support of Find Your Park. The public awareness campaign is designed to inspire people to discover their connections to America’s national parks.

The National Park Foundation is the official nonprofit partner of the National Park Service. Winnebago and the Winnebago Industries Foundation will help raise awareness of parks less traveled, and will lend support to the park foundation’s Open OutDoors for Kids program, which offers educational activities for children.

Entegra Coach’s E-Z Steer technology, which is designed to enhance the driving experience, debuted in March 2019 at the FMCA International Convention and RV Expo in Perry, Georgia. E-Z Steer is available on Entegra’s 2020 Cornerstone and Anthem diesel motorhomes.

According to an Entegra Coach news release, the electrically powered steering technology adapts to signals from the vehicle, analyzes driver input, helps to compensate for crosswinds, and automatically self-straightens. The result is smoother, more precise steering and reduced driver fatigue.

Other benefits of E-Z Steer include improved low-speed maneuverability and variable speed adjustments; speed-proportional steering that reduces low-speed efforts and improves on-center feel; and the ability to tailor steering resistance to a driver’s personal preference.

Entegra Coach is a division of Jayco Inc.

Toby O’Rourke, president of Kampgrounds of America Inc., added a second title when she was named chief executive officer in March 2019. Ms. O’Rourke replaces CEO Pat Hittmeier, who retired after 38 years with the company but continues to serve as a consultant.
Under their leadership, KOA has achieved record revenues, according to a company press release. KOA, founded in 1962, has 517 camping locations throughout North America.

A German company, Deutsche Composite Gmbh, and its CaravanBoat brand made a splash last September at the Caravan Salon Dusseldorf with the introduction of the Departure One, a combination of towable RV and motorized houseboat. The starting price is approximately $67,000.

The vehicle is about 8 feet wide and 29.5 feet long and can sleep four. Transforming the vehicle from an RV to a boat is said to take only a few minutes. On water, it’s powered by a 15-horsepower outboard motor. According to the company’s website, the pleasure boat was built to European guidelines and would need approval to be operated elsewhere.
For more information, visit www.caravanboat.de/en.

Popularity Of Camping Continues To Rise

The number of camping households in the United States has reached a new high of 78.8 million, according to the 2019 North American Camping Report, an annual independent study supported by Kampgrounds of America (KOA).

The report said more than 7.2 million households have started camping within the past five years. Also within that time frame, people are camping more frequently than ever before, with 72 percent growth among those who camp three or more times a year.

According to the report, these trends are being driven by factors such as an influx of younger and more diverse campers; millennials (people born from the early 1980s to the early 2000s) having children and taking them camping; and North Americans’ love for the outdoors. 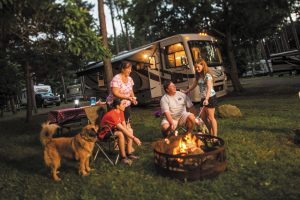 The United States has 78.8 million camping households, according to a new report.

Among the report’s findings:

*RVing is the second-most popular type of camping, with 24 percent of the market. Tent camping is most popular, at 59 percent, while cabin camping ranks third at 16 percent.

*58 percent of Hispanic campers said they would be interested in an RV experience, the highest interest level among all camper groups.

*96 percent of teen campers say they enjoy camping with family and friends, and 97 percent acknowledge that camping helps the adults in their lives to relax.

*90 percent of teen campers said they intend to camp as adults, and if they have children, 91 percent intend to bring them camping.

The survey was conducted by Cairn Consulting Group. To view the entire report, visit https://koa.com/north-american-camping-report/.