Seven RVC Outdoor Destinations properties are participating in the BEECause program, which provides homes for honeybees and educates people about the bees’ plight.

RVC Outdoor Destinations has launched the BEECause program to help save declining populations of the honeybee, which is an important pollinator for many crops. In addition to providing housing for bees at certain RVC properties, the company offers classes, tours, and workshops to employees and guests about how to support honeybee conservation. 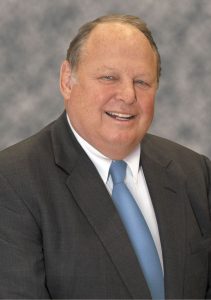 Peter Orthwein has stepped down as executive director of Thor Industries, but he remains a board member at the company, which he cofounded.

Peter Orthwein, cofounder of Thor Industries, stepped down from his executive chairman post on July 31, 2019, and was named chairman emeritus by Thor’s board of directors. Mr. Orthwein will remain a member of the board. A new chair had not been announced at press time.

Mr. Orthwein and Wade Thompson created Thor in 1980 with the acquisition of Airstream, which was struggling and unprofitable. But with Mr. Orthwein as the primary architect of the company’s growth strategy, Thor has been profitable every year since.

Today, Thor is a Fortune 500 company with revenue of $8.3 billion. It recently acquired one of Europe’s largest RV manufacturers, Erwin Hymer Group.

Mr. Orthwein was inducted into the RV/MH Hall of Fame in 2014.

Volta Power Systems, which produces lithium-ion energy systems for RVs and other applications, has moved out of its 7,800-square-foot facility and into a new 15,000-square-foot manufacturing complex in Holland, Michigan. The additional space was needed to accommodate rapid growth of the company’s RV business, according to a news release.

About 3,000 square feet of the new space will be used for offices, with the remainder for manufacturing, research and development, and product fulfillment.

In addition, Volta has partnered with Oregon Motorcoach Center (OMC) to satisfy demand for Volta retrofit projects on the West Coast. Volta currently provides most of its lithium-ion power systems to RV original equipment manufacturers, such as Winnebago.

The first step in an aftermarket conversion is to determine which Volta system offers the right amount of energy to meet a customer’s needs. Then, Volta builds the system and sends it to OMC for installation, which takes about a week.

The sixth Lazydays RV dealership opened in Knoxville, Tennessee, in May 2019. The dealership, formerly Tennessee RV Supercenter, was acquired by Lazydays Holdings Inc. in December 2018.

In addition, the Minneapolis, Minnesota, Lazydays dealership opened a new RV service facility in July 2019. It has 28 service bays, a covered service drive, four body and collision bays, and a 60-foot paint booth. 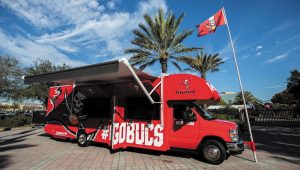 This football season, fans of the NFL’s Tampa Bay Buccaneers can look for a specially decked out Type C motorhome at the team’s home games. A customized 30-foot Thor Outlaw motorhome, outfitted by Lazydays RV, has been designated as the Street Team RV.

The Buccaneers Street Team was created in 2014 to engage fans and build excitement. The team’s ambassadors interact with fans at various community functions throughout the year and will use the RV for those appearances.

The RV was unveiled earlier this year at the Lazydays dealership in Seffner, Florida, just outside Tampa. In addition to Buccaneers exterior graphics, the Street Team RV features exterior interactive games that simulate a tailgate experience; two 65-inch wall-mounted exterior smart TVs with surround sound; and a back patio with awning and LED lighting, plus a DJ stand.

Included in the bill is a 21 percent increase in funding for the Federal Lands Transportation Program, which provides money to federal land agencies to repair and update roads, bridges, and other transportation systems within national parks and nearby gateway communities.

In addition, the bill dedicates $50 million a year and authorizes an additional $300 million a year for the Nationally Significant Federal Lands and Tribal Projects Program, which is designed to address exceptionally large repair projects, and which requires the U.S. Forest Service to develop a national strategy to carry out the Forest Service Legacy Roads and Trails Remediation Program. 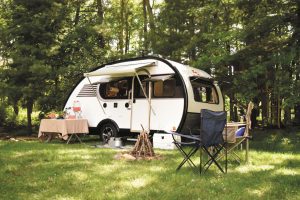 The Little Guy Max travel trailer is now being produced by Xtreme Outdoors, which acquired Liberty Outdoors this past summer.

Xtreme Outdoors is backed by entrepreneurs Yong Lee and Vikram Kaul. Joe Kicos, founder of the Little Guy brand, will stay on to run the sales and marketing efforts for Xtreme Outdoors. Most of the manufacturing staff also will remain.

Warranties for RVs sold by Liberty Outdoors will continue to be honored, according to a press release.

Look for “smart” technology to appear in a number of 2020 RVs.

OneControl technology from Lippert Components Inc. (LCI) is being implemented in all brands of Forest River’s Cherokee Group, LCI announced. A specially branded version of OneControl — the Cherokee Total Control App — can manage functions such as lighting, slideouts, and awnings. The app will include a new interface for 2020 models, which include Cherokee, Grey Wolf, Wolf Pup, Arctic Wolf, Alpha Wolf, Wolf Pack, Vengeance, and Sabre.

Recent upgrades to OneControl software allow for push notifications to be sent to users, reminding them of RV maintenance checks and informing them of RV features they may not be aware of. OneControl also can report diagnostic information that may help prevent maintenance problems.

Jayco Inc. announced in a press release that its Jaycommand system will be standard on a variety of its 2020 models, and optional on several others. Jaycommand utilizes a mobile app that can be downloaded onto a smartphone or tablet. With the app, users will be able to monitor and control a number of RV operations, which may include multiple light zones, slideouts, awnings, tank monitoring, leveling, heating/air conditioning, the water pump, the water heater, tire pressure monitoring, and the generator.

Depending on the RV make and model, Jaycommand is powered by OneControl, BMPRO, or Firefly Integrations. For a list of units that feature Jaycommand, visit www.jayco.com. 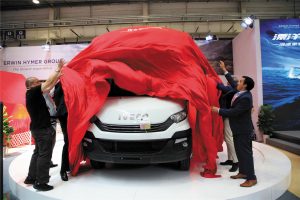 Officials prepare to put an RV from Erwin Hymer Group on display during the All in Caravaning trade show this past June in Beijing, China.

More than 700 exhibitors from 22 countries showcased more than 200 brands during the eighth All in Caravaning trade fair, held June 14-16, 2019, in Beijing, China. Nearly half of the participating companies were international exhibitors. About 500 RVs were on display, as well as accessories, appliances, furniture, camping equipment, and products for the outdoors.

The event included conferences and lectures focused on international exchange and industry trends; activities for children; and information about RV destinations.
The next All in Caravaning is set for June 2020 in Beijing. For more information, visit www.aicshow.com.