Statistical Surveys Inc. recently reported that the Solitude fifth-wheel line from Grand Design Recreational Vehicles has reached 25,000 in retail registrations. Solitude has legacy significance as the first product offered by Grand Design when the company launched in 2013. The Solitude is a luxury extended-stay model, and Grand Design officials attribute its success to the company’s customer-focused approach to creating innovative products with long-term value.

Grand Design also recently celebrated a milestone with the Momentum luxury fifth-wheel line, which launched in 2013 as well and has since extended to include Momentum, M-Class, and G-Class fifth-wheels and travel trailers. Recently, Statistical Surveys reported that Momentum fifth-wheels surpassed the 15,000 mark in retail registrations and are ranked as the number-one-selling toy hauler fifth-wheel in North America. The Momentum travel trailer continues to grow in popularity as well, broadening the company’s consumer base.

A report from RVBusiness.com notes that despite compelling evidence by members of the RV industry and others, the California Air Resources Board (CARB) voted on December 9, 2021, to ban the sale of new gas-powered leaf blowers and lawn mowers starting in 2024 and portable generators by 2028, in an effort to reduce harmful pollutants. Portable generators, including those in recreational vehicles, would be required to meet more stringent standards in 2024 and meet zero-emission standards starting in 2028.

The new requirement is an amendment to CARB’s existing small off-road engine (SORE) regulations first adopted in 1990, according to a release from CARB. The amendment applies to manufacturers and will impact only new equipment (model year 2024 and later). Californians can continue to operate their current CARB-compliant gasoline-powered SORE equipment; there will be no “ban” on using older models or used equipment purchased in the future. Older models on store shelves also can be purchased even if they are gasoline-powered.

The move by CARB aligns with Governor Gavin Newsom’s executive order signed in September 2020 that moves the state closer to a zero-emission future, the CARB statement noted. It also provides significant emissions reductions of smog-forming pollution needed for California to achieve stringent federal air quality standards in the future.

During more than two hours of testimony delivered in a Zoom call, 40-plus speakers addressed the board and only eight were in favor of immediately approving the regulations as is. Numerous speakers representing RV interests, including spokespersons from FMCA, RVIA, major RV manufacturers, and RV dealers, shared information.

Other speakers from the marine industry and from generator manufacturer Briggs & Stratton made a similar point: Generators can be vital lifesaving equipment that people rely on to help power their lives when their living circumstances might not be typical. In addition, the generators used in motorhomes and on large yachts are not portable, speakers noted. They are fixed into compartments in the RVs and boats, and are crucial to providing power when traveling off the power grid or during an outage. Speakers also explained that no reliable alternative to gas-powered generators exists that delivers the same kind of power and fits within the same cost parameters.

Other speakers focused on the economic impact and noted that rather than eliminating the generators from the state, the regulations will prompt consumers to travel across state lines to buy vehicles unaffected by California rules and bring them back. 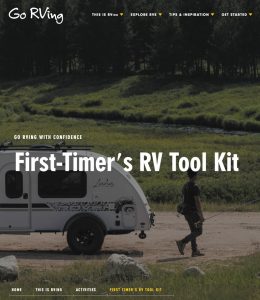 The GoRVing.com team continues to add valuable resources for those new to RVing.

More than two decades since it began, the Go RVing program continues to introduce millions of Americans to the freedom of RV travel and to build a desire and passion for adventures that await, according to the RV Industry Association.

One way the Go RVing team has accomplished this is by developing the First-Timer’s RV Tool Kit, available at www.gorving.com/this-is-rving/activities/first-timers-rv-tool-kit.

Launched in 2020, these first-timer resources helped the surge of new RV owners joining the RV community and looking for resources regarding how to properly use their RVs. The first batch of resources covered the basics: towing, driving a motorhome, RVing with kids and pets, what to look for when buying an RV, and some other basic tips.

Keystone RV began manufacturing its Cougar towable RVs in a new plant in Goshen, Indiana. This is Keystone’s fourth facility dedicated to Cougar production; it joins two others in Goshen, along with another in Pendleton, Oregon. The new facility is slated to add more than 150 new jobs in Elkhart County.

According to industry reports, demand for Cougar models increased following the product line’s redesign in 2020, coupled with an upswing in consumer demand. Company officials note that the new plant will substantially increase capacity and shorten production times for presold units.

The Cougar line of midprofile fifth-wheels and laminated travel trailers debuted in 1998.