FMCA members Rocky and Julie Naylor bought their converted Greyhound bus, a 1956 GMC PD-4104, from Rocky’s uncle and then set about making it their own.

Whether they’re attending a classic car show, visiting a national park, or hanging out with other RVers, Rocky and Julie Naylor, F454736, can expect comments about their converted Greyhound bus, a 1956 GMC PD-4104.

“The response we mostly get is shock or surprise, in a good way,” Rocky said. “They look at the outside and say, ‘Wow, this is really nice.’ But it’s usually a double-wow when they walk inside. That’s a good feeling (for us). We enjoy that.”

The glowing comments are a far cry from what Dick Naylor — Rocky’s uncle — heard as he considered purchasing the bus back in 1988. “I don’t think I would buy it,” Dick’s brother said of the vehicle, which was only partially converted and badly in need of a paint job.

Since then, the bus has undergone a massive transformation. Make that two transformations, because two branches of the Naylor family tree have invested considerable time, energy, and money to attain a grandeur seldom seen in old Greyhounds.

The first makeover began soon after Dick and his wife, Elsie, bought the bus for $18,000. They gutted and renovated the interior. They replaced the slanted windows. They chose a matching interior/exterior blue-and-mauve color scheme. The 6-71 Detroit Diesel engine was replaced with an 8V-71 Detroit Diesel, and the four-speed manual transmission gave way to a three-speed Allison automatic. Exterior upgrades included custom-designed fiberglass caps and flared wheel fenders. In all, Dick and Elsie spent about $60,000 on the bus, Rocky said.

Dick and Elsie owned the bus for 26 years. It took them around the country. “It turned a lot of heads,” Rocky said. “Everybody was always in awe of it.”

Including Rocky. A longtime fan of collectible cars, he had owned older Corvettes and ’57 Chevys, but seeing his uncle’s bus inspired him to buy one himself, in 1999. With Dick’s help, he refurbished a 1958 GMC PD-4104. He sold it a few years later amidst a faltering economy and rising diesel prices.

In time, Rocky and Julie bought a 24-foot Type A motorhome, a 1989 Fleetwood Flair. They discovered that they enjoyed RVing, but they wanted something bigger. Which brings us to 2014, when Dick and Elsie were ready to sell their 35-foot bus. Rocky and Julie were happy to buy it. 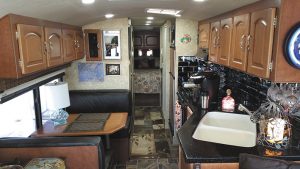 The Naylors made numerous upgrades to the interior of their GMC PD-4104 bus.

Soon, they were considering ways to make it their own. Rocky began removing countertops and cabinets and pulling up tile flooring, but he stopped when his back balked. A new paint job also was a priority — they decided on red, white, and blue — and that led the Naylors to Leisure Coachworks, C11820, an FMCA commercial member in Fontana, California. They met owner Jon Goldstein, who worked with them to develop a plan not just for the exterior paint, but for the entire interior.

“I don’t like to do things half-baked,” Rocky said. “I wanted this bus to be the best it could be. With Jon, we were able to get that.”

The Naylors dropped off the bus at Leisure Coachworks in January 2015. Over the next six months, they flew or drove to the shop from their home in Forest Grove, Oregon, several times to offer input and get updates.

Jon abided by Julie’s request for a fireplace and for a kitchen backsplash with mirrored subway tile. Other interior upgrades included new or reskinned cabinetry; new countertops, sinks, and hardware; and a new look for the walls, the floor, and the ceiling headliner.

Working with a sketch provided by Rocky, Jon incorporated into the paint scheme red wings that wrapped around the bus, as well as images of greyhound dogs. Rocky also requested that the exterior paint job include the Leisure Coachworks logo.

The Naylors saw the finished product in July 2015. “We were amazed,” Julie said. “I had no idea it could even look that good. It was beautiful.”

“The whole bus is totally painted and detailed,” Rocky noted. “There’s no wrapping of any type. That (Leisure Coachworks) logo was all done by hand, all the striping, everything. Each of those greyhound dogs is airbrushed on.”

The engine was rebuilt a few years before Dick and Elsie sold the bus. Since Rocky and Julie took possession, mechanical work has included a rebuilt transmission; installation of rooftop solar panels; a new radiator, alternator, air filter system, and hoses; and a compressor for the air bag suspension system, brakes, and throttle. For much of the work, the Naylors at various times have turned to Et’s Automotive & Truck Service in Hillsboro, Oregon, as well as mechanics Joe Maser and Adam Sontoro. (The latter is their nephew.)

Asked whether there is a downside to owning the bus, Rocky answered quickly: “Washing it all the time. It wears me out!”

But that’s far outweighed by the joys the bus brings to Rocky, a retired hospital construction project supervisor, and Julie, a retired special education teacher.

They invited family members to ride in the bus and toss candy to kids from the windows during the 2017 Fourth of July parade in Hillsboro, Oregon, near their home. Afterward, the Naylors were surprised to receive a blue ribbon and trophy for having the top parade entry. Since then, “We have kind of made a hobby of going to classic car shows, in Oregon, mostly,” Julie said.

They’ve lived in the bus for as long as six months at a stretch while wintering in Arizona. But for Rocky, nothing beats getting behind the wheel (which, by the way, is solid mahogany).

“I love to start it up,” he said. “And I love to drive and see people’s reactions when we go down the road. My uncle installed on this bus probably the largest muffler you can get. It’s a very throaty, beefy, manly kind of sound. It’s like a vehicle on steroids. People hear you coming.”

Whether people hear it coming or see it coming, the 64-year-old bus is still turning heads.

One In Half A Million