Ride Along With Equine Motorcoach

A manufacturer dedicated to helping horses, their owners, and other RVers travel in comfort and luxury.

At Equine Motorcoach, the term “horsepower” describes more than just the truck chassis and diesel engines the company uses in constructing its luxury conversions. Most of its clients own horses and appreciate being able to transport them in a safe, comfortable, low-stress way. They can travel and live in the same vehicle as their horses, each in a dedicated space. With tack, feed, horses, and living areas combined, driving to a show or a barn is easier. Once at a destination, the owners can park near the barn and check on the horses at their leisure.

Equine Motorcoach vehicles also appeal to another niche: RVers who have other items to store and tote in their travels, such as golf carts, off-road vehicles, boats, and even cars. These are secured inside for transport, where they remain clean and dry. An added bonus is the ability to tow a heavy trailer behind the coach if desired. 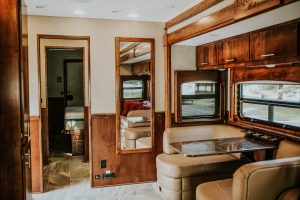 In the Equine Motorcoach two-horse model, a bedroom is between the front living area and rear horse quarters.

Equine Motorcoach was established in 2007 by Tom and Carolyn Stinnett to address the needs of those who drive their horses to myriad equestrian events across the United States. Such units already had been popular in Europe for years.

Carolyn Stinnett, a horse lover, was struck by the number of so-called “horse boxes” or “lorries” she saw while attending the Royal Windsor Horse Show in the United Kingdom. She suggested to her husband that an American market existed for these vehicles. Equine Motorcoach began building in Europe on U.S. chassis; in 2010, the operation moved to the United States. 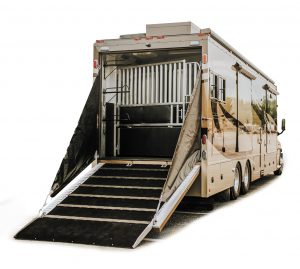 Mr. Stinnett owned Tom Stinnett’s Derby City RV (now Tom Stinnett’s Campers Inn Louisville) for more than 35 years and remains active in many aspects of the RV industry. He is heavily involved in the design and engineering of Equine Motorcoach products. “(Tom) has a keen eye for detail on the customization of our motor coaches,” said Ben Yates, vice president of sales and marketing.

Equine Motorcoach primarily builds custom units. The goal is to assess and accommodate each client’s individual preferences in design tastes and desired features, and, in some cases, even the chassis. Mr. Yates explained that approximately 90 percent of the company’s vehicles are constructed using Freightliner truck chassis. However, a client can opt for another chassis provided it meets the weight distribution requirements. For example, one gentleman chose a Peterbilt. “It was his third coach. He was educated on it,” Mr. Yates said. 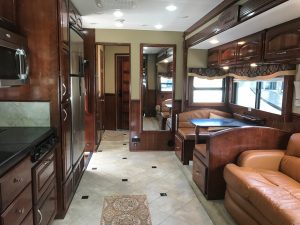 A front-to-rear view of the RV living area in an Equine Motorcoach.

He noted their clients appreciate the weight distribution, durability, safety, and smooth ride of a truck-based chassis. One huge aspect is the all-in-one approach. “Many customers have multiple trucks and trailers, requiring more than one driver, whereas we allow everything to be in one unit,” he said. Another advantage is the availability of service in major cities throughout the United States.

Most who opt for an Equine Motorcoach are not entry-level RVers. “They’re already familiar with these types of RVs,” Mr. Yates said, adding that some customers have even owned their own truck companies.

Recently, the company formed an alliance with NRC Truck Modifications in Middlebury, Indiana, which specializes in producing custom truck conversions with floor plan flexibility. NRC builds floor plans for Equine Motorcoach. Mr. Yates noted NRC’s “can do” attitude and willingness to innovate based on each customer’s requirements. 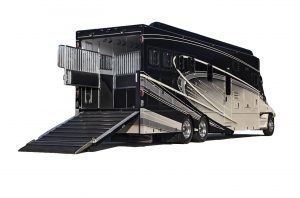 As shown in this four-horse Equine Motorcoach, spring-loaded gates in the rear separate horses for travel in the climate-controlled stall area.

Clients typically visit Equine Motorcoach’s facilities at Tom Stinnett’s Campers Inn RV, located in Clarksville, Indiana, near Louisville, Kentucky. They tour existing models to get a feel for what’s possible and meet with the design staff to plan their own unit. The company also exhibits its vehicles at horse shows and other events.

The company’s namesake Equine Motorcoach line includes two-, three-, four-, five-, and six-horse models. The units incorporate climate-controlled stalls in the rear designed to help horses ride comfortably. The living area varies in size based on the number of horses accommodated; the two-horse and three-horse models include a bedroom. Some units also incorporate an enclosed room for storing tack and other equipment.

Equine Motorcoach units range from 37 to 45 feet long and measure 102 inches wide. These Freightliner or similar-based coaches are propelled by 600-horsepower diesel engines. Their gross vehicle weight rating (GVWR) is 58,660 pounds, and they are rated to tow up to 40,000 pounds. 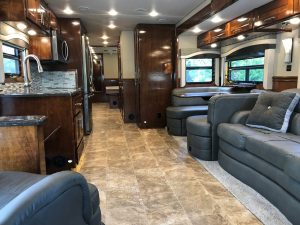 The models can accommodate up to seven people overnight when using a convertible dinette, a convertible sofa bed with a queen-size air mattress, and a large bunk above the cockpit. An A-frame “chalet” can be affixed to the top of the coach for extra sleeping, accessible from within.

Generously sized exterior bays accommodate tack and other equipment. When the unit is parked, hitching posts on the street side pull out and create a place to tie up horses outside. An awning provides the shade. Inside, an adjustable “saddle track” secures up to six saddles for travel.

A hydraulic ramp lowers to the ground and provides a wide berth at the rear of the coach. Horses are led up the ramp into the stall area and tied to horizontal berths separated by spring-loaded gates. The sideways orientation is said to reduce the stress they endure while riding and from sudden braking. Horses face the curb side, which cuts down on visual distractions. Another convenient interior feature: a built-in hay pod that stows up near the ceiling via an electric motor; touch a button and it lowers to the floor for filling and unloading.

Of course, for RVers who do not travel with horses, the Equine Motorcoach’s ample rear area offers many other storage possibilities. The hydraulic ramp is designed to handle a small car, along with golf carts, off-road vehicles, and other sizable toys. 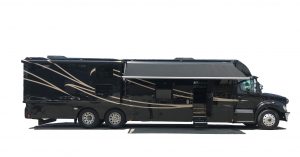 An exterior view of the Equine RV.

The Equine RV tag-axle motorhome, which does not include an area for horses, continues to grow in popularity, according to Mr. Yates. This model is available in lengths ranging from 35 feet to 45 feet and can be built on the Freightliner M2-112 or another suitable truck chassis with at least a 470-horsepower engine (larger engines available) and typically an Allison transmission. Its GVWR is 58,000 pounds. The motorhome’s 40,000-pound towing capacity can handle horse or car-stacker trailers, among other vehicles. It can accommodate at least seven people for sleeping and living.

In the towable arena, the enclosed Equine Carriage Trailer transports up to three horses, along with a car, feed, tack, and other supplies. No living or sleeping quarters are included. It can be towed by the company’s other models if desired. 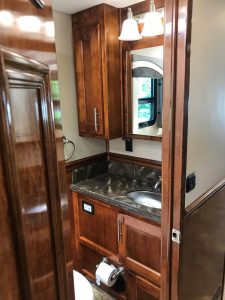 After selecting one of the models above, clients turn to making it their own. Units feature custom full-body exterior paint, with colors and designs specified by the purchaser. Four-point auto levelers, side-swing baggage doors, bonded thermopane windows, and power awnings with wind sensors are among the options. An exterior entertainment center with a TV, AM/FM radio, CD-DVD player, and speakers enhances outdoor relaxation.

Equine Motorcoach officials pride themselves on offering high-end yet comfortable interiors, with wood, fabrics, décor, and other features selected by the customer. Ultraleather upholstery, heated cockpit chairs, and porcelain tile flooring are offered. Cabinets feature dovetail construction. Residential appliances are used, such as an 18-cubic-foot French door refrigerator with ice maker in the 42-foot Equine RV mentioned above. Clients also can opt for a 72-inch-by 80-inch king-size bed in the rear bedroom. The bath can include a large, one-piece fiberglass shower or a square-tiled shower; a skylight; and a porcelain macerator toilet. Mr. Yates noted that other coach customizations may include enlarging a bath, adding a half bath, incorporating a kitchen slideout, or having a 48-, 54-, or 60-inch bunk above the cockpit.

Because of so many variables involved in creating an individual unit, prices vary widely but start at $250,000.

Whether they’re horse enthusiasts or not, experienced RVers who would like to adapt a luxury vehicle to complement their travel needs and lifestyle may find Equine Motorcoach an attractive option.