The John And Mable Ringling Museum Of Art

Daring stunts were among the exciting entertainment acts promised at a Ringling Brothers Circus, as this Courier print from 1900 shows.

Priceless art and mansion splendor combine with circus memorabilia at this must-see stop in Sarasota, Florida.

The circus was a unique form of family entertainment well before the advent of television, and its appeal remains strong today. Live music and daring stunts combine with expectations of something never seen before. A circus is a place of dreams.

At the John and Mable Ringling Museum of Art in Sarasota, Florida, the dreams still abound. You are transported across the Atlantic to a Venetian courtyard and can see art treasures from Europe, collections of Ringling Brothers Circus magnate John Ringling and his beloved wife, Mable. Next to the glittering Sarasota Bay is Ca’ d’Zan, their mansion. And the thrill and excitement of the big top live on at the Tibbals Learning Center. Surrounding it all are gardens, some first planted by Mable Ringling herself. To spend a day or more here is as pleasurable as your first trip to the circus.

The story of this outstanding destination begins in Baraboo, Wisconsin, in the 1880s, when John Ringling and his brothers started a circus in their backyard. They dreamt of bringing delight to the “child in every man” and began to put on their own shows elsewhere. At the start, the program seemed more vaudeville than circus, but within a few years, trained animals were an important part. James Bailey of Barnum and Bailey fame died in 1906, and soon afterward, the Ringlings bought out their competitors. The Ringling Brothers and Barnum & Bailey Circus was “The Greatest Show on Earth” by World War I.

According to one story, romance entered John Ringling’s life when Armilda Burton, called Mable, came to see a circus performance. She and John married in 1905. In 1927, on the shore of Florida’s Sarasota Bay, the couple completed an estate of resplendent luxury. Known as the last of the Gilded Age mansions, the 56-room Ca’ d’Zan (Venetian for “House of John”) is designed in the style of the grand palaces of Venice. It includes a roof built using Spanish tiles from the 16th century and a Belvedere tower that looks out over the bay.

In addition to building the house and filling it with opulent furniture, the Ringlings used the wealth they garnered from the circus and land investments to indulge in their joint dream of acquiring European art. During their several trips abroad, they amassed a collection of more than 600 masterpieces, many with religious themes, which are housed in the museum next to the mansion. 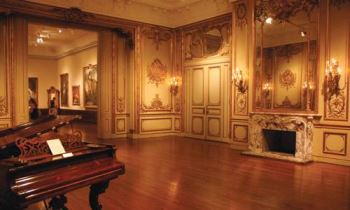 The Ringlings collected paintings and also bought and installed art from churches in Europe. They even saved two complete rooms from demolition; these came from the 1896 mansion of Col. John J. Astor IV on Fifth Avenue in New York City. The Cream Salon, designed in French Rococo Louis XV style, and the Regency library were moved in their entirety. The wooden wall panels, floors, ceilings, chandeliers, and furnishings, including the grand piano, appear today as they were in their glory days, waiting for rich and famous guests.

Mable and John also loved nature’s beauty. On the grounds of the Sarasota estate, they planted several gardens.  Needing her own place of repose, Mable planted a secret garden where only invited guests were permitted. Today, it welcomes all visitors. Another, her rose garden, is filled with 1,200 vibrant plants. The trail through the Dwarf Garden is lined with stone statues in varying poses. In addition, 13 old banyan trees shade walkways. The Millennium Tree Trail was planted in 2000 and is also available for strolling.

Sadly, John and Mable had little time to enjoy their home together. Mable died in 1929, only a couple of years after the mansion was completed. Her death and the Wall Street collapse that same year almost cost John the estate, but he borrowed money to continue this tribute to his wife. When he died in 1936, he had only $311 in the bank and many debts. The two are buried together on the grounds. 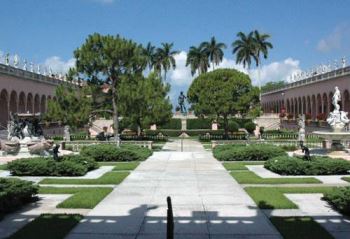 We began our visit with a docent-led tour of the courtyard and the John and Mable Ringling Museum of Art. The Ringlings concentrated on acquiring art from the 1500s to 1700s. The details our docent noted enabled us to better appreciate the magnificence of these works.

After exploring the museum, we took a self-guided tour of Ca’ d’Zan, which is richly decorated, like the museum. Ten years ago the home underwent a $15 million restoration. It’s huge, at 36,000 square feet, with 41 rooms and 15 bathrooms.

Returning to the Visitors Pavilion, we watched a movie about the Ringlings in the Asolo Palace Theatre. Originally built in Asolo, Italy, in 1798 in honor of the exiled Queen Catherine of Cypress, the theater was scheduled for demolition. Just as the Ringlings had saved two rooms from the Astor mansion, A. Everett Austin Jr., the first director of the Museum of Art, rescued this theater. He had it dismantled, brought from Europe to Sarasota, and restored to its original glory. Its most recent update was completed in 2006. From the comfort of plush seats, visitors sit like royalty watching a film history of the Ringling family and the circus. In the evening, theater-goers can enjoy plays, productions, lectures, and concerts.

It was circus time next: time to explore two circus museums and the Tibbals Learning Center. The latter was a generous gift of philanthropist and circus enthusiast Howard Tibbals. Inside we were captivated by the largest miniature circus in the world, a 3,800-square-foot model of the Ringling Brothers and Barnum & Bailey Circus set in the Golden Age of 1919-1938. Utilizing his collection of circus photographs, Tibbals spent 50 years handcrafting this miniature masterpiece. Beyond the big top, likenesses of circus workers, each with an individualized face, perform the mundane daily activities of eating, bathing, washing clothes, and dealing with personal needs. Elephants, lions, and bears are tended to by their tiny keepers. 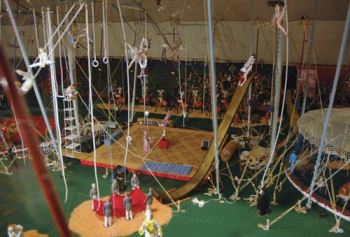 As the lights dim in the room, they rise under the diminutive Big Top, where acrobats perform “ooh”- and “aah”-inspiring feats. Around the room, adults say, “I remember,” and children say, “Wow!” All are enthralled by this fabulous re-creation of the Greatest Show on Earth.

Long ago, word that the circus was coming to town brought shrieks of delight from just about everyone. Posters advertising exotic animals, daredevil acts, and comical clowns were plastered all over town. You can see dozens of those excitement-stirring posters on display.

Also in the past, wagons bearing performers and exotic animals rolled through the center of town, an impromptu parade of excitement. Today calliopes serenade visitors in a room filled with gilded wagons from bygone days.

From the days of the circus train is the Wisconsin, John and Mable Ringling’s personal 1905 railcar. Howard Tibbals found the railcar several years ago, and it has been completely restored. Visitors can peer inside this 79-foot-long equivalent of today’s private jet, which has a stateroom, dining room, servants’ quarters, and personal kitchen. When new, this rolling land yacht cost $11,000 — a price equal to approximately $289,000 today.

A circus has equipment that requires maintenance. A model workshop at the museum here shows the tools and workers needed to keep the show on the road. In another shop, wood carvers demonstrate the art of fashioning animals for a carousel. Nearby, the beloved sad-faced clown Emmett Kelly has a place of honor.

In September 2011, a 24,475-square-foot expansion of the Tibbals Learning Center was opened. Here you can step into the bold-colored world of the circus and experience interactive exhibits, with the clowning of Lou Jacobs and high-wire walking of Karl Wallenda. You can then try your hand at some stunts. For those who wish to study the circus, a research center is available.

To help visitors get around this huge museum complex, a tram travels from the visitors center to the museum, mansion, and circus exhibits. The buildings are accessible to people with walkers and wheelchairs. Three eateries are on the premises as well, and a gift shop holds charming reminders of the museum and circus. The Ringling Web site offers excellent information to help you plan your visit.

Next time you’re in the Sarasota area, refresh your circus memories and learn more about John and Mable Ringling’s legacy of art and beauty. None of it would be here were it not for “The Greatest Show on Earth.”

This is not a complete list. Please check a campground directory or FMCA’s RV Marketplace, online at FMCA.com and in the January and June issues of FMC, for more listings.