In the lobby of the FMCA national office in Cincinnati, Ohio, hang portraits of two men who are regarded as the fathers of FMCA. One is Bob Richter, who put together the gathering in Hinckley, Maine, that led to the formation of FMCA. The other is Ken Scott, who made his “pipe dreams” — and those of thousands of other motorhome travelers — become a reality.

The following article by Mr. Scott appeared in the premier issue of Family Motor Coaching magazine, published February 15, 1964. Mr. Scott’s dedication to FMCA during the 13 years he served as the association’s first executive director, beginning in March 1965, was instrumental in the sustained growth and viability of the organization. Mr. Scott passed away in 1996, followed by his wife, Dotty, in 2002. We are rerunning this article as a tribute to the Scotts and to take readers back to a time when the concept of motorhome travel really began to evolve.

By Kenneth T. Scott, L63
January 2013
“You mean like a trailer?” “No, I don’t mean a trailer, I mean a completely self-contained house on wheels, with its own engine and all the equipment normally found in a modern house.” “But isn’t it difficult to use for ordinary things like going out for groceries?” “Doesn’t it take an awful lot of fuel?” “How can you ever keep a schedule with a car that heavy?” “Oh, a camper! You know, I have a friend who bought a bus and had it towed out to the river — he uses it to sleep in.” “How much does a thing like that cost?” “We thought it was a regular bus — it looks like one from the outside.” “Now I remember — you had a picture of it on your Christmas card, a couple of years ago.” “Does your wife drive it?” “I never saw anything like that before!” “Where did you get the idea for that?” “Where’s the stove?” “You mean there’s a bathroom, too?” “Do you mean to say that you can hitch your boat trailer on behind?” “What — a built-in vacuum system for cleaning the carpet?” “A two-way radio — you mean that you can talk to other people somewhere else while you’re traveling?” 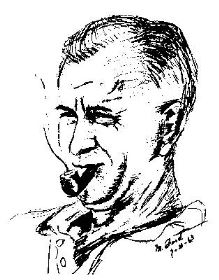 It all started one day during the second World War, while I was hanging on to a ward room chair and enduring a quartering sea about midway through the Davis Straights. Why couldn’t living quarters be arranged in a vehicle — possibly a bus — which would include its own motive power and which might be the basis for an entirely new philosophy of fun and relaxation, yea, even another way of life. Of course the new philosophy didn’t completely develop on that convoy, or even the next one, but the embryo did, and now some 20 years later from literally having “much water under the bridge,” it has developed into the “Big Car.”

Painted gray and ivory, it isn’t “like a trailer” and it does have a bathroom, and there is a built-in vacuum system for cleaning the carpet. The questions keep coming — some trite, some ridiculous, some amusing, some thinly covering the feeling that “we’d better be careful with this guy, he must be some kind of nut!” Of course this feeling is reciprocal, because we feel the same way about anyone who doesn’t automatically and immediately see that “this is the life!”

By the time the war was over, what with becoming re-established in civilian life, setting up conventional housekeeping and other complications of this civilization, the “pipe dream” lay dormant, until one day one of the men came back to the office and said, “Boss, do you remember that bus idea you were telling us about one day? Well, I saw one stored in a garage up in Walnut Hills this afternoon.”

Well now, what do you think of that? Here I had been nursing an “original” idea for 5 or 6 years only to find out that someone had already done it!

It was nice, even by today’s standards! A Dittmar snub-nosed coach with a Chevrolet engine, professionally converted for a local businessman to use as a mobile display unit for vending machines. It had been used for a short time, very successfully, then gas rationing had come along. Out with the vending machines! In with a sofa, and, with everything else already built in, presto — a house car! Then, the business man had had no time to use it, and it had been stored ever since. The garage foreman spoke in guarded tones of the “several” thousand dollars of original cost and conversion expense which he knew about, and had seen receipts for. Was it for sale? Yes, for substantially less than the proven cost. However, we were still naïve, and thought we could do it for hundreds rather than thousands! (We live and learn, don’t we!) So we leased it for two summers and, still thinking we could do it better, and for less money, we let someone else buy it. By this time my wife Dotty had progressed from extreme caution to great enthusiasm for it. Of course no small part of the conditioning was the fact that during this period our children were toddlers. We still think that there’s no other way to travel as comfortably with small children!

During the next five or six years of searching for a satisfactory Flxible, we became partners on a large school-bus-type coach powered by a Hercules engine, which we purchased already converted. Then we finally found the right one, and have been building it ever since!

We have used it occasionally for several years, but now that the youngsters are teenagers the time for which we have been preparing has arrived. We travel during the summer while the youngsters are on vacation from school — to the west coast in 1962, to the east coast in 1963. We watched the solar eclipse from Damariscotta Lake, only a few miles from the FMCA organizational meeting at Hinckley, and didn’t know a thing about it! This summer we hope to see you at the National Convention at Ticonderoga!

Eighteen of the families in attendance joined together to form a non-profit organization on July 20. On July 21, they agreed on a name – Family Motor Coach Association.