In early 2013, a 1982 Apollo Sceptre motorhome found a new home and new owners who are dedicated to restoring it to its former luster.

“Houston, we’ve had a problem!” These simple but horrifying words were transmitted from the Apollo 13 space capsule in outer space 43 years ago. Just two days into what was to be America’s third manned lunar landing mission, the service module suffered a mission-crippling and life-threatening oxygen tank explosion. The brave three-man crew safely returned to Earth a week later, in great part due to the heroic efforts of the ground-support team at Mission Control Center in Houston, Texas.

The Apollo 13 mission was introduced to a new generation by director Ron Howard in the 1995 movie Apollo 13, starring Tom Hanks. However, the Apollo ’13 rescue mission outlined in this article takes place much closer to home and doesn’t involve a crippled spacecraft, but rather a rare and doomed vintage motorhome — the Apollo Sceptre. As Ron Howard did for Apollo 13, we, too, would like to introduce a new generation of RVers to the Apollo Sceptre and its amazing story.

Our mission began in February 2013 while RVing in beautiful Death Valley National Park in California. We received an e-mail from fellow vintage motorhome enthusiasts James and Linda Holder, F28392S. James, a service adviser at Tennessee RV in Knoxville, is the proud owner of a mint-condition 1983 Foretravel diesel pusher that was featured in the “Keep Those Classics Rolling” article that appeared in the December 2010 issue of Family Motor Coaching (page 70). James informed us that he had run across an Apollo Sceptre motorhome on Craigslist and knew that we would be interested. 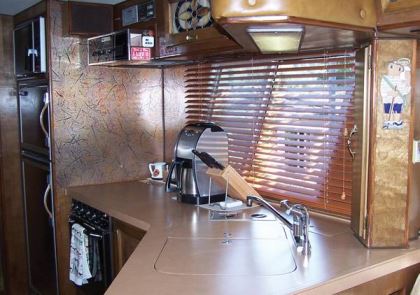 Ever since we bought our 1983 Apollo Sceptre in 2003, we have become authorities on all things concerning Sceptre motorhomes and have taken on the task of tracking down the surviving coaches. Only 44 Sceptres were produced between 1982 and 1984 (two of the 1984 models were listed as 1985 models). Once we locate one, we record its status and offer our assistance to the lucky owner, when possible, in an attempt to keep as many of these exceptional and rare luxury motorhomes on the road for all to enjoy.

Because the Craigslist description indicated that this particular Sceptre was in deteriorating condition and being marketed as a “great office or extra room,” immediate action was needed to rescue it. Since this all began in 2013 and we were attempting to save an Apollo motorhome, we named our endeavor the Apollo ’13 Rescue Mission.

The Apollo Sceptre has twice graced the cover of Family Motor Coaching. The first time was in April 1980 (“Apollo Unveils Diesel Coach in FMC Tradition,” page 23), while it was still in development. The second was in April 1982 when the motorhome finally became available to the public. In a 1982 article titled “Quality Comes First” (page 38), author Ginny Ade provided a glimpse of the new motorhome after touring the Apollo factory and test-driving the Sceptre. She began her review with this supposition: “If you could design the ideal motorhome, no doubt you’d build . . .” She went on to describe numerous maintenance, drivability, and creature comfort features that many owners would want but were not available in motorhomes of that time. She continued, “Fortunately, there’s no need to go to all that trouble. Apollo has already conceived and created such a coach — the new 35-foot Sceptre, now in production after three years of drawing-board and prototype engineering.” What wasn’t apparent at the time this article was published was that this cutting-edge motorhome would help establish the high-end diesel pusher market that is commonplace today.

With a rare Sceptre motorhome in danger of being scrapped or landing in a junkyard, never to grace the scenic highways of America again, several people and events came together to save it. Although our rescue mission was not as heroic, dramatic, or important as the one in 1970, it was important to my wife and me and other vintage RV enthusiasts who care about such things. With FMCA celebrating its 50th anniversary this year and the Recreation Vehicle Industry Association commemorating 100 years of RVing just a few years ago, attention has turned to early RVs and the roles they played in the evolution of today’s RV industry.

When we found our Sceptre, our only interest was to purchase a quality used motorhome that would suit our needs as full-time RVers. The one-owner Sceptre we bought was outstandingly maintained for its entire 20 years. It was in showroom condition inside and out, indicating to us that the first owner was very proud of his motorhome. The purchase price for a new Sceptre back in the 1980s was between $179,000 and $250,000. A buyer would custom-order the unit to his or her individual specifications and then wait three months for it to be handcrafted. Sometimes eager customers had to wait additional months for delivery due to manufacturing backorders.

Since we were in Death Valley and pretty much out of touch with the rest of the world, and the Sceptre being advertised for sale was located in Arroyo Grande, California, we reached out to Randy and Betsey Pedrini, F432306, who happen to live in the same town. The Pedrinis are the proud owners of Sceptre number 44, the final one built. Together, we attempted to contact the seller via the online posting, with limited success. Unfortunately, we later found out that Randy missed an opportunity to see the Sceptre at an open house. We were afraid that we may have lost this one.

Unbeknownst to us at the time, Russ and Trina Tilkes, F432307, were interested in buying the distressed Sceptre and had been trying to contact us. They were following our Sceptre activities online and hoped to get some information and guidance concerning this particular coach. Again, because of our remote location, all attempts at communications failed.

The seller later informed us that the unit had been sold and our contact information had been passed along to the buyers. We waited with great anticipation, because we did not know what the new owners’ intentions were for the motorhome. Would they return it to the road? Fortunately, the Tilkeses bought the unit, and it was not long before Russ contacted us. He said the Sceptre was sunk in the sand near the California coastline, the undercarriage was rusted, the batteries were dead, and it would not start. He stated that he tried to walk away from this motorhome several times, but kept thinking back to all the impressive features that the Sceptre offered. Because of Russ’s background in the trucking, heavy equipment, and automotive industries, he felt that he could not pass up such an opportunity. Thanks to his negotiating skills, along with the unit’s unknown mechanical and operational condition, he purchased it at a great price.

With the goal of getting the coach home under its own power, Russ made several trips to the stranded Sceptre. His initial attempts had limited success, but soon he got it running, freed it from the sand, and victoriously drove his rescued Apollo home. Trina was waiting with the video camera rolling to record the triumphant trip up their long driveway. The video captured Russ blasting the Hadley air horns, playing its musical horns, and his voice booming over the public address system — all in perfect working condition. It also revealed the pride and excitement the couple had in their “new” 31-year-old Sceptre.

This rescue mission is not over and will be ongoing for the next few years, but with a start like this, the sky is the limit, and the Tilkeses are shooting for the moon!

Many folks may say that Russ and Trina are dreaming if they think they can revive this old motorhome to travel condition, but that doesn’t faze this couple, because they have heard it before. More than 10 years ago, they relocated to the California central coast from Golden, Colorado, to start a new life. They resigned from their traditional jobs to start a high-end custom hot rod business called Just Dream’n. Their idea was to create a totally one-stop, full-service shop for custom car enthusiasts. The inspiration for the name came when Russ told his boss that he was resigning to open a custom car shop, to which his former employer replied that he was “just dreaming.” The couple will proudly tell you that they are still dreaming and that they now have big dreams for their new vintage Sceptre. 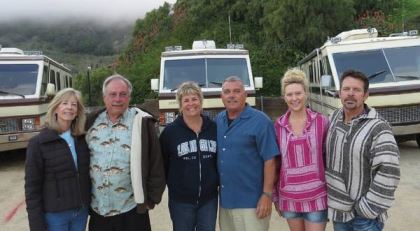 To celebrate this joint rescue effort, all three Sceptre-owning families — ours, the Pedrinis, and the Tilkeses — united for a photo opportunity at Avila Beach, California, which marked the beginning of a lifetime of friendship and vintage RV camaraderie.

Cheryl and I receive great pleasure helping other Sceptre owners whenever possible, and this case was especially rewarding. To date, the “found” list includes more than two dozen Sceptres. We have seen about a dozen in person, and we are on the trail of several others. These beautiful motorhomes have been located as far away as Florida, Canada, and Australia, and as close as California. Our goal is to help preserve as many Sceptres as possible, because we feel they are an important part of RV history and are still capable of bringing their owners many more decades of reliable service and pleasure.

If you are a Sceptre owner, want to become one, or just have questions about this vintage motorhome, please contact us via FMCA; the Apollo Motorhome Owners Group at http://autos.groups.yahoo.com/group/ApolloMotorhomes; or the Apollo Facebook page. You also can contact us via our new Web site, www.apollosceptremotorhomes.com, which includes much of the information about the Apollo Sceptre that we’ve been able to gather through the years. Happy Trails!

North To The Yukon

Mail And Messages For FMCA Members