Pickleball is played at a growing number of facilities frequented by RVers, including Outdoor Resorts Indio.

Become acquainted with this easy-to-learn, fun-to-play court sport that is taking the RV world by storm.

I received my first real exposure to pickleball during the winter season of 2010-2011 at RiverBend Motorcoach Resort near Fort Myers, Florida. A friend encouraged a few of us to try a new sport he enjoyed. Little did I know what I was in for!

We strung up a temporary net between two golf carts and taped off a single court on an unused parking lot. It caught on like wildfire! Soon we had 20 to 30 folks wanting to play — bikes and golf carts would line the parking lot as residents watched the action. Some of us had no clue what we were doing, but we knew that we loved this addicting, fast-paced sport.

As our group expanded, we asked that one of the unused tennis courts be repaved and repurposed into four permanent pickleball courts. The homeowners association board resisted, but we were undeterred. A pickleball club was formed, and we raised about $25,000 to build the courts.

The rest is history. RiverBend now has eight dedicated pickleball courts, which are played on seven days a week. Nearly a third of the park’s residents play pickleball. The courts have helped to attract renters, and have become a selling point for lot buyers.

But where did pickleball really begin? Why is it so popular? Why is it so addictive? What’s the future of pickleball?  Finally, if you haven’t yet tried this unbelievably popular sport, why not?

The roots of pickleball can be traced to the summer of 1965. One weekend, two families gathered at the home of Washington state congressman Joel Pritchard on Bainbridge Island, Washington, near Seattle. He and a friend, businessman Bill Bell, 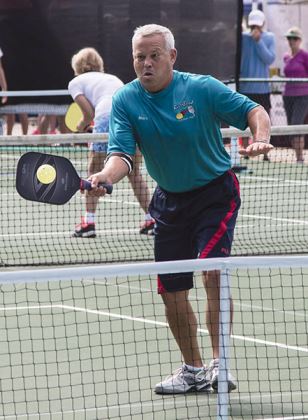 played a round of golf and returned to the Pritchard home, where they found their children bored and restless. A badminton court was on the property; perhaps that would entertain them.

Unable to find a full set of badminton equipment, the men brought out table tennis paddles and a perforated plastic ball. They set the net at 60 inches — the standard height for badminton — and players began volleying the ball over the net. The ball bounced well on the court’s asphalt surface, so the men lowered the net to 36 inches as an experiment.

The next weekend, kids and adults resumed play at the Pritchards’ home, this time with neighbor Barney McCallum joining them. Soon, the three men created some rules, relying heavily on the game of badminton. They kept in mind the original purpose: to provide a game that the whole family could play together.

Little did these guys know how exponentially the game would grow, especially once the RV crowd became involved. Back in 2010, there were around 100,000 players, mostly in Arizona, Florida, and Southern California. However, as RV snowbirds became hooked, they wanted to play in their northern locales. That’s when the real explosion began. By 2016, there were around 2.5 million players. Some estimate that by 2018, as many as 8 million will be playing pickleball.

Have you ever played tennis, handball, racquetball, or squash? You’re halfway there. Pickleball is somewhat similar. Play can be soft, or rapid-fire, or a combination. Games are played as doubles or singles, with paddles that resemble oversized table tennis paddles. Players hit a perforated plastic ball that looks like a Whiffle ball over a net, which is 36 inches high on the ends (34 inches in the middle). In regular play, the winner is the first to score 11 points, and to win by 2.

If you haven’t played pickleball but want to try, players in most communities often are happy to give free lessons and help. Many of these folks have paddles that you can borrow or buy. Many online sites sell pickleball equipment as well. Sporting goods stores, while a bit late to the party, also are beginning to carry pickleball gear.

The USA Pickleball Association (USAPA) is the governing body of pickleball in the United States. Its “Ambassadors” promote the sport around the country. Yes, I’m one of them! We see ourselves as spreading goodwill for this terrific game.

Pickeball is popular because it’s fairly easy to learn, without too many rules, and the equipment is reasonably priced. In my opinion, the biggest reasons for the game’s popularity are that it is so much fun to play and it is an extremely social sport. Men and women play as equals, generally in doubles games.

It’s very good exercise, but because the court is one-quarter the size of a regulation tennis court, play is easier on the joints and muscles. If you pass by pickleball courts, you’ll often hear laughter and hooting and hollering over well-executed shots. The game sucks you in like no other I’ve ever experienced. Play it a few times and you’ll be hooked, too!

Why are RVers so hooked on pickleball? Because the game is portable. The USAPA has made buying a portable net very affordable. (At this writing, a portable net system was $139 for USAPA members; $149 for nonmembers.) We carry a net as we travel in our motorhome and have played all around the United States, and also in Canada. With permission, we’ve played in a parking lot in Quebec City, Quebec; on a hockey rink at an RV park on Prince Edward Island; on a friend’s 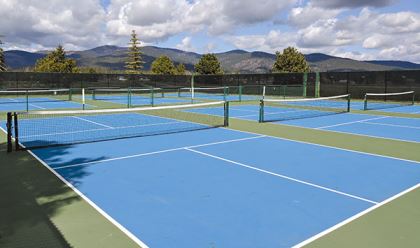 driveway; on indoor and outdoor basketball courts; on tennis courts; and at RV parks all over.

Countless RVers have taken up the sport and are spreading the word. RV parks across the country are building courts at a breakneck pace, because visitors want to play pickleball.

Tournaments also are popping up everywhere, in almost every state. Numerous RVers travel the tournament circuit to mix competition with sight-seeing. The RV lifestyle is perfect for this.

By the way, if you think you’re too old to start playing, you are wrong. Although the sport engages all ages, the USAPA cites a study that reports 13 percent of “casual” participants (who play one to seven times a year) and 75 percent of “core” players (who play eight or more times a year) in the United States are 55 or older. Many of us are well into our 70s and still playing.

A few years ago, my wife and I, along with another couple, decided to visit an RV community in northern Idaho called StoneRidge. Wouldn’t you know, about a year later they had six brand-new pickleball courts. We now call StoneRidge our summer home. Sure, there is an 18-hole golf course on-site, plus a pub and grill, swimming pools, and an activity center. The community has a first-class, upscale RV park surrounded on every side by pristine mountains. In addition, it sure is fun to play pickleball while bald eagles fly over the courts, and moose and elk can be seen nearby.

The accompanying sidebar lists some of our favorite RV resorts to play pickleball. In addition, check out the “Places to Play” tab on the USAPA’s website, www.usapa.org. You can easily search by state and city, find local courts, reference tournament schedules, and obtain contact information for area USAPA Pickleball Ambassadors. The website has thousands of listings, with a GPS location for each site.

An excellent resource that includes information about RV parks with pickleball courts across the United States and Canada is Big Rigs Best Bets, available in a hard copy and an online edition (www.big-rigs-rv.com).Coauthor Ken Hamill said, “We liken pickleball today for RV parks the same way we did Wi-Fi a few years ago. It’s something everybody is asking for.”

So, get out of the recliner, put on your court shoes, and find an RV park or RV resort that offers pickleball. They’re all over the United States and Canada. Even if you don’t love exercising, you’ll get a great workout with this fabulous and fun sport. You’ll be glad you did!

Alan Neff has been a USAPA Roving Ambassador for six years. He and his wife, Diane, have been full-time RVers for more than 12 years.

The following are some of the author’s favorite places to play pickleball:

Where did the name “pickleball” come from? Several theories — and some lively debate — exist. Here are a couple.

Joan Pritchard, wife of cofounder Joel, was quoted as saying that the game reminded her of the pickle boat in the sport of crew, whose oarsmen were chosen from the leftover rowers from other boats — similar to how pickleball evolved from a mixture of other sports.

Another theory ascribes the name to the Pritchards’ cocker spaniel, Pickles, whom they acquired a couple of years after the game was invented. He reportedly enjoyed chasing after stray balls and hiding them.

‘Rally In The Valley’ Seminars