Norris Dam And The Secret City

In Oak Ridge, Tennessee, the American Museum of Science & Energy reveals how atomic power was harnessed to build the first atomic bomb.

So often while traveling in the South, we find our motorhomes parked alongside a sparkling Tennessee Valley Authority (TVA) lake. One of the most beautiful is Norris Lake in Tennessee. How it made a drastic impact not only on American history but on the entire world is quite a story.

Back To The Source

Norris Dam was the first of the TVA dams; construction began in 1933, just months after the Tennessee Valley Authority was established. Building dams was part of President Franklin Roosevelt’s New Deal, a plan to spur the economy during the devastating Great Depression. Flooding the area was a vast project requiring the removal of 2,899 families, and even 5,226 graves. Numerous opponents called it “socialist,” but it controlled the unpredictable floods on the Clinch River; provided electricity at fair prices; and, mainly, created jobs — so many jobs that the government built the town of Norris for the contractors and workers constructing  the dam.

The park’s 19 historical cabins were built in the 1930s by the Civilian Conservation Corps and are listed on the National Register of Historic Places. Ten standard cabins also are available. All of the cabins have modern amenities.

Once you pull in and set up, you are ready to explore. There is much to see and do besides swimming, boating, hiking, and fishing. If you wish to go boating, you don’t need to tow or carry one, because rentals of houseboats, pontoon boats, or smaller boats are available at the marina inside the park. The marina also has a small restaurant (open in season) that sells short-order food items.

The Lenoir Museum Cultural Complex, near the park entrance, gives a glimpse of life in the area before the dam was built. Admission is free and the museum is open year-round. Its collection was acquired over many years by a local chicken farmer named Will G. Lenoir. Mr. Lenoir offered the items to the state of Tennessee if officials agreed to build a place to display them. He volunteered at the museum until his death at 97. On the days he worked, he continued to bring in more items for the collection.

The museum has rooms furnished as they would have been in the early 1900s; re-created shops and workspaces; pottery; and so much more. The prize of the collection is an antique Bavarian barrel organ from the early 1800s. The museum manager explained, “It came to us totally disassembled. Mr. Lenoir found two tinkers who spent about 500 hours restoring it.” Listening to the instrument and seeing the intricate movement of the parts is amazing.

Two structural remnants of Appalachian life have been relocated to the museum grounds. One is the Rice Gristmill, originally built in 1798; it was reassembled here in 1935. The Caleb Crosby Threshing Barn was erected in the 1830s near the Holston River and relocated here in 1978. It is filled with the items a farmer used back in the day, his old farm tools, plows, and a horse-drawn wagon.

If this awakens a desire to learn more about life here in the early days, head into nearby Clinton, Tennessee, and visit the Museum of Appalachia. I warn you, you will want to spend a lot of time here. It is a Smithsonian affiliate that has several buildings filled with artifacts, a re-created town, and a top-notch home-cooking-style restaurant.

When we walked to the restaurant/gift shop, a trio was practicing the “Tennessee Waltz.” It set the theme for the entire tour. Will Meyer, grandson of the founder, John Rice Irwin, met us and talked about the history of the museum while we dined on a hearty meal. The museum has more than 30 buildings that reveal numerous facets of Appalachian life: a blacksmith’s shop, a smokehouse, a corn mill, a schoolhouse, a chapel, a broom and rope house, and many cabins, as well as two large showcase buildings. The latter are the Appalachian Hall of Fame and the Display Barn. Thousands of items reside in these two buildings, ranging from famous and infamous musicians’ memorabilia to coffins and everything in between. What makes them all so special is that they are not replicas. They are actual structures moved from elsewhere in Appalachia. Each has a special story.

You will be greeted by all the usual farm animals, such as sheep, goats, chickens, cows, horses, and even peacocks. And several resident cats. Some are tame; some feral. Stevens is a friendly gray tabby that rules the roost in the shop. This place really takes you back in time to a life that no longer exists but was too precious to be forgotten.

You’ve got to admit that all this is fun, but where does that “change the world” business I mentioned come in? You don’t have to look far. About 22 miles southwest of the Norris Dam State Park campgrounds is Oak Ridge, a government-built city that was located here largely because of Norris Dam.

In August 1939, Albert Einstein sent a letter to President Roosevelt warning him of the possibility of someone creating what later became referred to as an atomic bomb. He stressed the danger of Germany developing such a bomb. An influential friend, Alexander Sachs, was chosen to talk to the president about the letter in October 1939. After consideration, Roosevelt summed up the conversation: “Alex, what you are after is to see that the Nazis don’t blow us up.”

As a result, Roosevelt launched the Manhattan Project. It was not until October of 1942 that the Corps of Engineers began acquiring property for the development of a top-secret city.

Oak Ridge had a small rural population but was still easily accessible by both highway and rail. Plus, ample electricity to power all its high-tech experiments was available, thanks to the recently completed Norris Dam.

The secret city was completed from scratch in 30 months. Workers did not know what they were building because of extreme compartmentalization. Mum was the word. Employees were cautioned never to speak of what they did there. Today the land is still the site of the Oak Ridge National Laboratory, but only U.S. citizens are allowed to see some of it via a controlled bus tour. You must have a driver’s license from a state with recognized ID procedures, or a valid passport. The tour is offered from March through November and is handicapped-accessible.

Our guide, Willis Baker, grew up in the area and was knowledgeable about the history. He gave a wonderful understanding of the way things were back in the early days.

Our tour started at the American Museum of Science & Energy. My favorite exhibit there is the restored flattop house, typical of what families lived in during the project. Houses were driven in on trucks and assembled in a matter of minutes, complete with furniture and accessories. Willis told us of residents going to work in the morning and not being able to find their homes when they returned in the evening, for entire streets full of other houses had been built while they were gone. 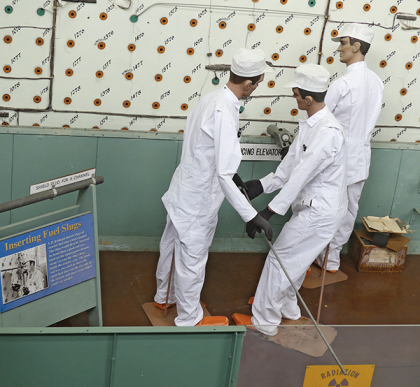 We made a stop at New Bethel Baptist Church and passed within sight of theGeorge Jones Memorial Baptist Church (also called the Wheat church), the only structure left in the abandoned Wheat community. We visited Y-12 New Hope Visitor Center, where we got an overview of the project. Next stop was my favorite part of the tour. We actually entered the Graphite Reactor, where the crucial elements needed to create an atomic reaction were extracted from raw uranium. This has been declared a National Historic Landmark, as it is the oldest nuclear reactor in the world.

K-25, the former uranium production facility and once the largest building in the world, has long been demolished, but we visited the site on which it stood.

This tour makes the Manhattan Project come to life in a way no amount of reading or images can re-create. The scope staggers the imagination. The distance between each facility was usually about 7 miles. This was another deliberate way to keep things secret. The workers learned what they were building only after the first atomic bomb was dropped on Hiroshima, Japan, on August 6, 1945.

You must remember work is still going on at this place. Willis spoke metaphorically. “The scientists here are religious. They speak in ‘tongues.’ I hear them talking and cannot understand most of it. My head is spinning.” He told of things like 3D printing of a vehicle, and even an entire house.

Today in Oak Ridge, you see remnants of the Manhattan Project in the Alexander Inn, once the hotel for visitors to the project, and the Chapel on the Hill, which served as a place of worship for all denominations. Some of the original homes still exist, as does Jackson Square, where residents celebrated the war’s end, something they helped bring about.

You return to the campground with a new understanding of the interwoven layers that led to your being parked in a beautiful spot near Norris Lake.

The Land Between The Lakes