The popular Quartzsite Sports, Vacation & RV Show is set to take place in January 2021, with precautions established by event planners.

If all goes as planned, RVers will converge on the Arizona desert for the 2021 Quartzsite Sports, Vacation & RV Show, set for January 16 through 24. But the event, which typically draws hundreds of thousands of RVers, will look and feel different in the wake of COVID-19.

Among the precautions that will be in place: mandatory face coverings for all exhibitors, attendees, and show staff; numerous hand-cleansing stations; expansion of the big tent’s three interior aisles to 15 feet; one-way aisles; posted reminders about social distancing and aisle directions; clear plastic dividers separating exhibitors’ selling areas; and possible temporary closings of some entrances to avoid overcrowding. In addition, attendees will be discouraged from arriving on opening day and will be encouraged instead to visit during the week.

Chinook Motor Coach has moved its RV manufacturing operations and headquarters from Elkhart, Indiana, to Peru, Indiana. Chinook had been producing motorhomes in Elkhart since 2017.

A report in the Kokomo Tribune said that along with the move, Chinook planned to hire 250 people to build motorhomes in a newly renovated 65,000-square-foot facility in Peru. That followed Chinook’s purchase late in 2018 of Riverside Travel Trailer, which included 130,000 square feet of manufacturing space in Peru. Chinook has been producing toy haulers and loft travel trailers from that facility.

The move to Peru brings all of Chinook’s manufacturing and business operations onto one campus. 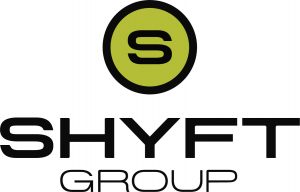 After divesting its emergency response division, Spartan Motors Inc. changed its name to The Shyft Group Inc. Also new are the company logo and the corporate website, www.theshyft
group.com. The Shyft Group is headquartered in Novi, Michigan.

The Shyft Group is the corporate parent of Spartan RV Chassis and other brands, which will continue to operate under their existing brand names.

The company’s new name represents speed, efficiency, agility, and a high-intensity approach, according to a press release. It was approved by the company’s board of directors and by a vote of shareholders. The Shyft Group’s NASDAQ ticker symbol is SHYF. 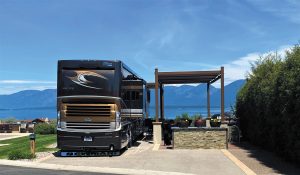 RVers enjoy the wide-open spaces of Montana while camping in luxury at Polson Motorcoach Resort, an FMCA commercial member campground.

Insider, a digital news site, noted that an RV can be one of the safest ways to travel during the coronavirus outbreak, and it compiled a list of 10 of the most luxurious RV parks in the United States.

Between its early June launch date and mid-July, Go RVing’s new ad campaign reached nearly 310 million people through social media and radio, the RV Industry Association (RVIA) reported. The campaign, titled “Go On A Real Vacation,” encourages consumers to visit an RV dealership and join the 46 million Americans who have indicated they are planning an RV trip this year.

The radio ad ended its run on July 12, but social media efforts continued in the next wave of the campaign, which included broad-cast, digital, audio, and print media.

Unique visits to GoRVing.com were up more than 37 percent during the first wave of the campaign. And after the debut of the campaign’s second wave, traffic to the Go RVing website reached record highs in August. Unique users, website sessions, and page views more than doubled since July.

In addition, the short “Go On A Real Vacation” commercials that people see before watching a YouTube video have logged more than 14.1 million views since launching on August 24, RVIA reported.

Living Vehicle, founded in 2017, has introduced its 2021 Living Vehicle luxury travel trailer series, which consists of three models: the Core, the Max, and the Pro. 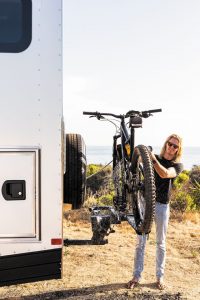 All are 32 feet 8 inches long and can sleep four. And, all are designed to function off-grid for extended periods, powered by Volta Power Systems’ lithium-ion battery system. The Volta system can charge from shore power, solar panels, an optional alternator (installed in a gasoline or diesel tow vehicle), or an optional Cummins generator. Company literature notes that these layers of redundant power supply maintain long-term health and safety in the event of severe weather or natural disasters. Living Vehicle models also feature 100-gallon fresh-water tanks.

The RVs’ shells are made entirely of aluminum, with no wood used. The Core, Max, and Pro are rated as four-season units.

Interior amenities include a bathroom with a spa-style shower, a residential-style kitchen, and a master bedroom with a cool-touch 8-inch memory foam mattress.

The most significant differences among the three models are their weight ratings and their power capability.

A new mediation program designed to resolve warranty disputes and help avoid costly lawsuits is now available to RV manufacturers and their customers. The Dispute Resolution Program for Recreation Vehicles (DRP-RV) was developed through a collaboration between the Lawyers Committee of the RV Industry Association (RVIA) and DeMars & Associates Ltd., an alternative dispute resolution firm. The program, which is free for consumers, is voluntary and confidential.

DRP-RV can benefit both RV manufacturers and consumers, according to RVIA. Benefits include fast results (generally, a 40-day timeline); dispute resolution without attorneys; an experienced, neutral third-party administrator in DeMars; and a network of experienced mediators across the United States and Canada that can hold mediation conferences at locations convenient to the consumer.

According to the program rules, a mediator will attempt to help the parties reach a satisfactory resolution of their dispute, but the mediator cannot impose a settlement upon the parties; the parties control the outcome of the mediation. In that way, the program differs from arbitration, where an arbitrator hears evidence and makes a decision.

If a resolution cannot be reached through the DRP-RV program, consumers can pursue other remedies available under state and federal law.