Games With The Grandkids

RV trips are great opportunities to show young travelers easy ways to stay active — without even thinking about it.

I’m a fitness professional. But don’t groan and turn the page just yet. Because much more importantly, I’m also a grandmother. I have two beautiful grandchildren, Amelia and Eli, ages 6 and 4, who are absolutely the light of my life. 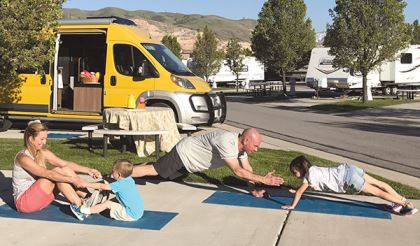 And while I think it’s great fun to watch my son deal with all the problems that he previously, um, blessed me with, being a grandmother also brings a whole new perspective to seeing the kids grow in other aspects of their lives. For me, that includes the grandkids’ fitness and health.

Years ago, my husband, James, and I started “The Fit RV,” a website that steers RVers toward a more healthful RV lifestyle. But back then, it was just the two of us RVing. My two kids were already grown and out of the nest, and we weren’t RVers when my kids were still at home. So, James and I didn’t have those experiences — those RVing-with-kids memories — to pull from once the grandkids came along. But, like I said, perspective changes when your role goes from parent to grandparent, and these days, RVing with the grandkids is one of my life’s greatest treats. It also helps that if the grandkids drive us nuts, they’re easily returnable!

A healthy attitude about fitness is one of the best legacies I can leave Amelia and Eli. We all know that fitness is good for us, but somewhere along the line, our attitudes about it might have gotten skewed. For too many of us, fitness is a “chore,” or something on the dreaded Have-To-Do list . . . if it even makes the list at all. Not so with my grandchildren. Their minds are still wide open! I’d like to see them develop a lifelong attitude that fitness is fun, rewarding, just as much a part of everyday life as eating, and MORE a part of everyday life than watching TV. RV trips with the grandkids can be the perfect setting to start instilling such positive attitudes toward physical fitness.

If you find yourself RVing with young ones, give some of these fitness games a try. You’ll not only be surprised at how much fun you’ll have, you’ll also be doing your own part in leaving a fitness legacy. You will be creating healthy feelings toward exercise in your own little loved ones (even if they don’t yet know it is exercise) that quite possibly will carry over into their adult lives. I can’t think of a better gift. 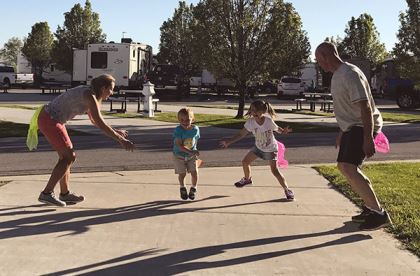 If you’ve been subjected to watching the “Dora The Explorer” TV show with your favorite little people, you’ve likely encountered Swiper, the sneaky fox who’s always swiping Dora’s things. In this simple action-packed game, each player channels their inner Swiper and tries to get other players’ “tails.” It’s an excellent leg strength, stability, and agility activity that you’ll love as much as they do!

Two or more can play this one. You’ll need either a bunch of long socks, some plastic grocery bags, or some kitchen towels for the “tails.” Each player tucks one tail into the back of their pants, making sure it’s hanging out long and looks like a tail. The object is to try to grab someone else’s Swiper tail while not allowing them to pull yours. If they do get your tail, you have to say, “Swiper, no swiping!” three times, just as Dora does in the “Dora The Explorer” cartoon. Then, the person who swiped your tail responds with “Oh, man!” (the character Swiper’s famous line, which your grandkids will know), and hands the tail nicely back to the swipe-ee. Play continues. Surprisingly, this game does not take up a ton of space and doesn’t usually involve much running or chasing. Players mostly stay in a small area, dodging left and right as necessary. 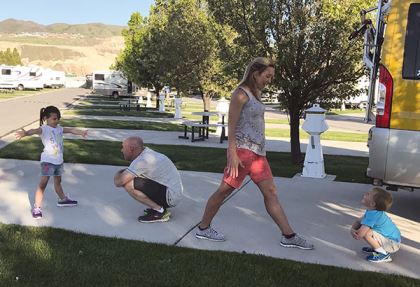 This version of the classic game we all know has a fitness-based spin that I’d argue is even more fun than the original. It also ends up being a great workout, since it involves jumping, squatting, and the best part — jogging victory laps.

Two people stand facing each other. They jump up and down four times (or if jumping is too hard, just raise on your tippy toes). For jump one, say, “Fee.” For jump two, say “Fie.” For jump three, say “Foe.” On the fourth jump, say “Fum” and strike a pose to show your choice of either rock, paper, or scissors.

To play a “rock,” squat down into as small of a ball as you can handle and hold it there. To do “paper,” stick your arms straight out to your sides, flap them up and down like wings, and stand with both legs spread wide apart. Finally, to play “scissors,” stand with both feet spread apart front to back (like open scissors), and continuously jump (or step if jumping is too difficult) to switch your legs as though the scissors were opening and closing.

The winning pose is just like in traditional Rock-Paper-Scissors: Paper covers rock, rock breaks scissors, and scissors cut paper. For each round, the winner gets to jog a victory lap around the picnic table, and the other person has to clap and cheer.

Jump ropes are inexpensive, easy to transport in the RV, and a blast for kids. I used to teach an after-school jump rope club, and I remember fondly the joy and pleasure the kids got from jumping rope. And the best part: It is a high-intensity workout that they don’t even realize IS a workout!

If your littles are complete novices, start by simply having the two people turning the rope hold it still and have him/her jump over it at his/her own pace. The best way to introduce jump-roping to kids is through simple rhyming games. Everyone says a rhyme together. The Teddy Bear rhyme is one of my favorites and is easy for little ones to remember:

How old are you?

(Continue counting out loud. The skipper jumps out when his/her age is called.)

This game really has two parts: It starts out as an opportunity for kids to get silly and creative, then shifts into a quick tag game to determine who goes next. Players take turns being “Froggy McPig,” trying to make the other players smile with their silliest animal impersonations and sounds.

Start with the youngest person as the first to be Froggy McPig. That person stands in front of everyone else and gets to act out any animals he/she chooses, including animal noises, while everyone else watches. His/her job is to be so funny, someone else will have no choice but to crack a smile, or even burst out laughing. Once Froggy McPig points out someone who is smiling or laughing, it becomes a tag game, with Froggy McPig as “it.” The first person to be tagged becomes the next Froggy McPig, and the game restarts.

About the author: Stefany Adinaro is an RVing fitness pro and the self-proclaimed “better half” of the website TheFitRV.com. Stefany and her husband, James, currently RV in their hard-to-miss bright yellow Winnebago Travato motorhome. While she loves her RV adventures, Stefany says her favorite adventure is being “Mugga” to her two grandkids, Amelia and Eli.