The Antebellum Trail Of Georgia

Milledgeville’s Old Capitol was Georgia’s political hub from 1807 to 1868.

Mansions built before the Civil War still stand in the heartland of the state.

The Antebellum Trail was created by Georgia Tourism to show travelers what life was like before the Civil War. Many towns along the route were untouched by the war’s destruction. The trail is roughly 100 miles long, from Macon to Athens; along the way is a mixture of lush countryside, casual travel, rich historic architecture, and Southern charm.

I found this a more interesting alternative to the highway around Atlanta’s west side, and the drive time is about the same. But it wasn’t until researching this article that I learned of new places to explore. This journey starts in Macon, the southernmost town on the trail, and concludes in Athens.

Macon is only 30 miles northeast of Perry, where FMCA members will meet March 15 through 18, 2018, for the association’s 97th International Convention. Macon’s biggest event, the International Cherry Blossom Festival, runs March 16 through 25, so it will still be going on after the convention, but even if you miss the festival, the town is worth a visit for its great collection of antebellum mansions. A couple are regularly open for tours: the Cannonball House, and the famous Hay House, a mansion designated as a National Historic Landmark.

Other attractions worth a stop include the Museum of Arts and Sciences, with four galleries featuring frequently changing exhibitions, hands-on activities, a planetarium, observatory, nature trail, garden, store, auditorium, and classrooms. The Tubman Museum encompasses the nation’s largest collection dedicated to educating people about the art, history, and culture of African Americans. You may also want to see the Georgia Sports Hall of Fame, just around the corner from the Tubman Museum. 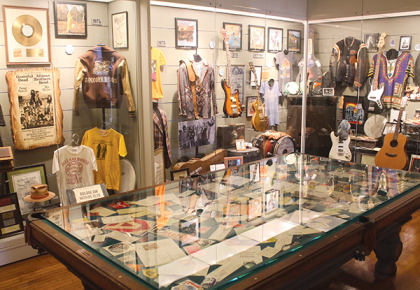 Macon boasts an amazing musical history. Otis Redding, of “Sitting on the Dock of the Bay” fame, moved there with his parents when he was 5 years old. Little Richard was born Richard Wayne Penniman there on December 5, 1932. Many other musicians claim Macon as their birthplace or hometown.

Capricorn Records, a label run by Macon natives, turned the town into a hub for Southern rock music in the late 1960s and ’70s. Thanks to the Capricorn record label, the Allman Brothers Band moved to Macon. They lived in the Big House, as it’s called. The house is now the Big House Museum and worth a tour. The restored home holds a treasure trove of Allman Brothers memorabilia.

Although none of the original band members were from Macon, some are buried there. Gregg Allman, who passed away in 2017, is buried near Duane Allman and band member Berry Oakley in Rose Hill Cemetery.

The soul-food landmark H&H Restaurant is where “Mama Louise” Hudson fed the Allman Brothers band members, even when they were too poor to pay. When they became famous, in 1972, she joined them on a tour. As any fan of the band will tell you, this restaurant is a must-stop. It’s open Tuesday through Sunday, serving breakfast and lunch only.

Antebellum means “before the war.” The Civil War. Union Gen. William T. Sherman’s March to the Sea destroyed many Southern towns and villages in an attempt to end the war more quickly. But some communities were spared the scorched-earth policy. Earlier-built homes sometimes remained untouched, and so we’re afforded a museum-quality look into a past that might have been lost.

From Macon, we continued up the Antebellum Trail on U.S. Route 129. Old Clinton, settled in 1808, was one of the nation’s first industrial towns, and it was targeted during the Civil War. Old Clinton War Days re-enacts some of the conflict each May. Self-guided tours of Old Clinton are free.

After the war, Old Clinton declined steadily, and the little town of Gray, 2 miles up the road, grew up around the railroad. At Gray, you will pass a marker honoring Otis Redding, born nearby in a little town called Dawson. The marker looks like an LP record and record jacket, with Redding’s likeness on it.

Next stop is Milledgeville, 28 miles east of Old Clinton via State Route 22. This community partially survived the war’s devastation. It was named in honor of John Milledge, governor of Georgia from 1802-06, and it served as the capital city of Georgia from 1804 until 1868. Mr. Milledge also donated the land in Athens used for the University of Georgia.

The nearby Oconee River Greenway welcomes you to paths and boardwalks for jogging, bicycling, or just relaxing. A fishing station and boat ramp with a mainly undeveloped shoreline offer views of native birds and plant life. Four-legged friends are also welcome on the trails, and at a designated dog park, you can let your pet run off-leash.

Next up is Eatonton, located 20 miles north via U.S. Route 441. Eatonton is famous for the Uncle Remus Museum, a memorial to Joel Chandler Harris, who authored the marvelous critter stories. Who could forget Brer Rabbit, who begged not to be thrown into the briar patch? The museum is open seven days a week; hours vary by season. 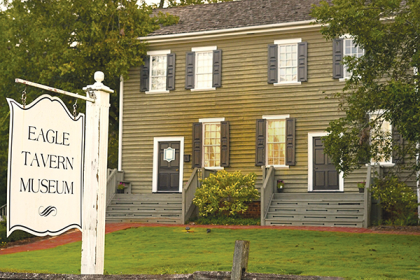 We continued north on U.S. Route 441 toward Madison, and found the Farmview Market, a new retail complex that has a grocery store, a specialty butcher shop, and a farm-to-table café using all locally sourced foods. After enjoying tasty samples of relish, and not resisting some Italian sausage, I headed for the checkout. Happily, they packaged it in double bags with ice. This is a tasty stop.

Madison is next, but be sure to get off at the bypass or you’ll miss it. Before the Civil War, Madison was described as “the most cultured and aristocratic town on the stagecoach road from Charleston to New Orleans.” Today, it has one of Georgia’s largest designated historic districts.

As the South gained more plantations, Madison attracted nearby planters who came to shop, socialize, learn, and worship. Some of them also built homes in town. Antebellum architecture reflected the shift from the early yeoman farmer society to a slave-based economy, dominated by a handful of planters whose grand homes spoke of their status. This new architecture also demonstrated the growing prosperity in the community and an interest in the Greek Revival style. Mansions were added and older homes updated throughout the city.

Madison mostly avoided destruction during the Civil War. One story tells us why. Seems that local politician Joshua Hill had a gentleman’s agreement with Gen. Sherman’s detachment.

We stopped at Heritage Hall, a home with massive white columns draping the front. The 1811 core of the home was turned into a mansion in the 1830s by Dr. Elijah Evans Jones, and it also is known as the Jones-Turnell-Manley House. This house museum is one of the few mansions in town that are regularly open to the public. Besides the beautiful period furnishings, look for the “window etchings.” When Dr. Jones’ daughters and granddaughters got engaged, they took their diamonds and etched on the windows to make sure they were “real” diamonds — at least that’s what our tour guide told us.

On a more serious side, one of the rooms in the Heritage Hall displays surgical amputation kits actually used in the war. And I later learned that back in 1860, of the 9,997 people in Monroe County, seven were free blacks, 2,984 were white, and 7,006 were slaves.

Continuing northward along U.S. 441, we arrive in Watkinsville, home of the Eagle Tavern Museum. This is an important part of local history, and much older than the Civil War era. It was opened in 1801 as a tavern, inn, and stagecoach stop, which is similar to what it is today: a hotel, restaurant, and grog stop.

Keep heading north to Athens, where the 1820 Federal-style Church-Waddel-Brumby House, believed to be the oldest home in Athens, serves as the Athens Welcome Center. The mansion is one of four antebellum dwellings on the “Museum Mile” tour of homes; each home presents a different architectural style.

The historic downtown area features tree-lined streets, sidewalk cafes, and unique boutiques. It’s located directly across from the campus of the University of Georgia. This was the first state-chartered university in the country, and it has architecture dating back to 1806.

Among the many things to see on campus is the State Botanical Garden of Georgia. This beautiful space has a tropical conservatory, several specialty gardens, a specially designed hummingbird garden/trail, 5 miles of nature trails, a gift shop, a café, and more.

One place I wanted to check out was the soul food spot called Weaver D’s Delicious Fine Foods on Broad Street. But I couldn’t find it through the university traffic. By night, traffic slows down, however, and I did discover marvelous music and a comfortable nighttime scene. Don’t miss the magnificent chandeliers in the Five Bar.

The Antebellum Trail offers many more sights than the few mentioned here. The next time we travel it, we will give it more time. It beckons with opportunities for more exploring, and the memory still lingers.

Welcome centers are located in most of the cities along the trail as well, so stop by as you travel for details about that particular area.

Campgrounds Near The Trail

The following is not a complete list, so please check your campground directory or the RV Marketplace, found at FMCA.com and in the January issue of FMC.

President’s Message: FMCA — We Are All Connected